The 10 Best Concerts of the Week: Slayer, Chromatics and More 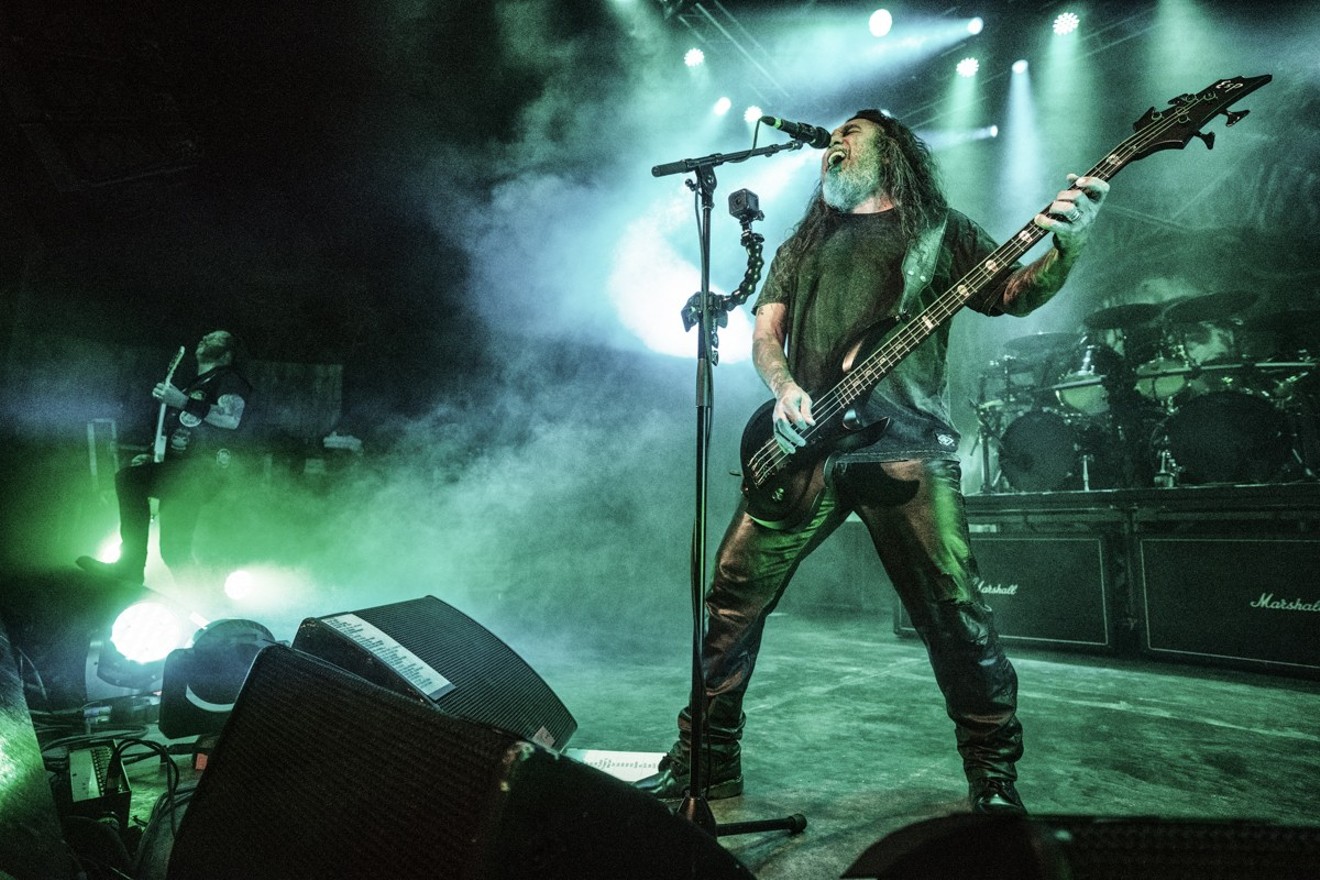 
This week boasts plenty of touring acts, including Slayer, The Cult, The Strumbellas and The Killers to name a few. Gorilla vs. Bear hosts its seventh showcase featuring the Chromatics at Granada Theater, and Bonnie Bishop plays a Mother's Day concert at Fort Worth Live on Sunday.

Paul Slavens, frontman of the late '80s and early '90s band Ten Hands, is pretty well-known around these parts. His radio show on KXT-FM 91.7 has earned him many Dallas Observer Music Award titles, including this year's nomination for Best Radio Show/Podcast. But he also hosts an impromptu show at Dan’s Silver Leaf in Denton. He takes song-title suggestions from people and creates music based on those titles right on the spot. You can catch him at Dan's most Monday nights. Diamond Rodrigue

Despite calling it quits last year, Slayer’s farewell tour has wrapped all the way around the globe and will soon be landing in Dallas for the second time in less than a year. A member of trash metal’s “big four,” Slayer is one of the most influential and acclaimed bands of the genre. They’ve crafted iconic songs about boundless evil, invading heaven and angels of death, winning two Grammy Awards along the way. And yet after nearly four decades of inciting mosh pits, it seems the band is finally ready to hang up their leather pants. Though considering that their final tour is slated to continue into 2020, it should be fair to say the band has been thus far enjoying their send-off. Joining Slayer for what’s likely to be their final gig in town are bands heavily inspired by their reputation and sound. Lamb of God, Amon Amarth and Cannibal Corpse will open the show and round out a dream lineup of metal’s best. No word yet on whether they’ll make a third lap. Nicholas Bostick

Gorilla vs. Bear hosts its seventh outing this week and features the Chromatics. You'll remember the electronic outfit from the popular music blog's second a handful of years ago. Editor and founder of Gorilla vs. Bear, Chris Cantalini always brings the best up-and-coming and already trending acts to Dallas (past GvsB shows have included Danny Brown and Glass Candy, to name a couple). Cantalini has a real knack for bringing great music to Dallas, and fans of his blog always know what to expect. Joining the Chromatics are Montreal-based electronic band Desire and electronic duo In Mirrors. DR


The Cult
7 p.m. Thursday, May 9 at House of Blues, 2200 N. Lamar St., $35-$89.50
Longtime fans of British rockers The Cult and the band’s multi-platinum-selling Sonic Temple won’t want to miss this tour. The Sonic Temple Tour commemorates the 30th anniversary of the release of their 1989 album, which featured some of The Cult’s top songs including charting singles “Fire Woman,” “Sun King,” “Edie (Ciao Baby)” and “Sweet Soul Sister,” as well as fan favorites “Soul Asylum” and “NYC.” The set list for the tour will reportedly draw from The Cult’s 10 studio albums, with the centerpiece being a “super set” focused on tracks from Sonic Temple — some songs of which haven’t been performed in the three decades since the album’s release. Formed in 1983 as Death Cult before shortening the name, refining their sound and releasing Spiritwalker, which soared to No. 1 on the U.K. independent charts and kick-started the band’s history of charting singles. Led by Ian Astbury and guitarist Billy Duffy, The Cult continue to bridge the divide between hard rock and indie alternative rock. The Broken Things open. Daniel Rodrigue

If you’re pissed you won’t be able to see The Killers at Woodstock 50 due to its supposed cancellation, don’t worry. All hope has yet to be lost. The Las Vegas-based, four-piece rock group is hitting The Bomb Factory after spending months in the studio, putting together a new record. It will be their sixth release in nearly three years. Earlier this year, the Killers put out the single “Land Of The Free,” a tear-jerking tune about President Trump’s proposed border wall, racism and the lack of gun control reform in the U.S. Frontman Brandon Flowers has said the band’s latest album is likely to come out early next year. Jacob Vaughn

Uli Jon Roth made a career out of combining two personal obsessions: Jimi Hendrix and western classical music. His approach has always pivoted on these two pillars, on imbuing the wide-screen compositional force of classical with the spiritual aesthetics of Jimi Hendrix. It’s on this unlikely and frankly odd ground that the guitarist carved new avenues in metal and Americana rock, first with his initial band Dawn Road, and then later with much larger acts Scorpions and Electric Sun. In addition to dozens of blues, metal, and prog rock records, Uli Jon Roth has written large-scale works for orchestra and in the ‘80s invented a new sort of guitar — the so-called “sky guitar” has extra strings, frets and is capable of reaching the elevated frequencies of a violin. Guy’s done a lot. Jonathan Patrick

Muscle Shoals, Alabama, has long been a mecca for musicians the world over for sharing its name with the legendary Muscle Shoals Sound Studio. And it’s also where the electro-rock duo BoomBox calls home. Composed of Zion Rock Godchaux (son of former Grateful Dead members Keith and Donna Jean Godchaux) and DJ Harry, BoomBox’s fifth studio album, Western Voodoo, hit the streams last fall and is the group’s first album with new member Harry. Zion’s longtime collaborator, Russ Randolph, left the band in 2016 but the lineup change seemingly hasn’t stopped the band from further innovation. Describing the new album as “dirty disco blues,” Zion says the new album is the band’s most musically diverse to date. Combining bass-heavy disco beats and dripping drumpads with Zion’s auto-tuned vocals and electro-fied guitar strumming makes for dynamic listening. And the group’s penchant for energetic stage antics will make it all the easier to stomp to the beat. NB

Saturday night should be a bumping night of soulfully energetic tunes as two of the pop world's brightest lights take the stage. Colombian-born Kali Uchis has mastered the art of genre-blending as her recent album, Isolation, takes more left turns than an Amazon delivery truck navigating downtown Dallas. Befitting an artist who started out by looping samples in her bedroom, Uchis' songs dabble in vintage R&B, smoke-tinged jazzy beats, indie rock and hip-hop without becoming overly indebted to the sources. It's a creative blend that landed her album on many 2018 year-end, best-of lists. English singer-songwriter Jorja Smith follows in a similar vein, albeit a bit more hushed and restrained. Like a whimsical house-music-influenced version of Alicia Keys, her hit album, Lost & Found, is a thoughtfully eclectic collection of life observations that sounds universal enough to be recognized, yet personal enough to reveal insights into her own personal occurrences and happenings. Jeff Strowe


Bonnie Bishop
6 p.m. Sunday, May 12 at Fort Worth Live, 306 N. Houston St., $12
Bonnie Bishop's hit "The Best Songs Come From Broken Hearts" has been well-received, so much so that it's included on the soundtrack of the TV series Nashville. When Bishop took a break from years on the road to attend graduate school, the creative writing major met award-winning producer Dave Cobb. Once he heard her demos, he knew her voice was meant to sing soul music. Her last full studio album, 2016's Ain't Who I Was, couldn't have a better title. While her roots remain planted in country rock, Bishop's newer sound is likely to be her best yet. Bishop's show Sunday evening is the perfect Mother's Day treat for the special lady in your life. DR
KEEP THE DALLAS OBSERVER FREE... Since we started the Dallas Observer, it has been defined as the free, independent voice of Dallas, and we'd like to keep it that way. With local media under siege, it's more important than ever for us to rally support behind funding our local journalism. You can help by participating in our "I Support" program, allowing us to keep offering readers access to our incisive coverage of local news, food and culture with no paywalls.
Make a one-time donation today for as little as $1.