A Bartender Rates the No. 1 Deep Ellum Bathrooms for No. 2 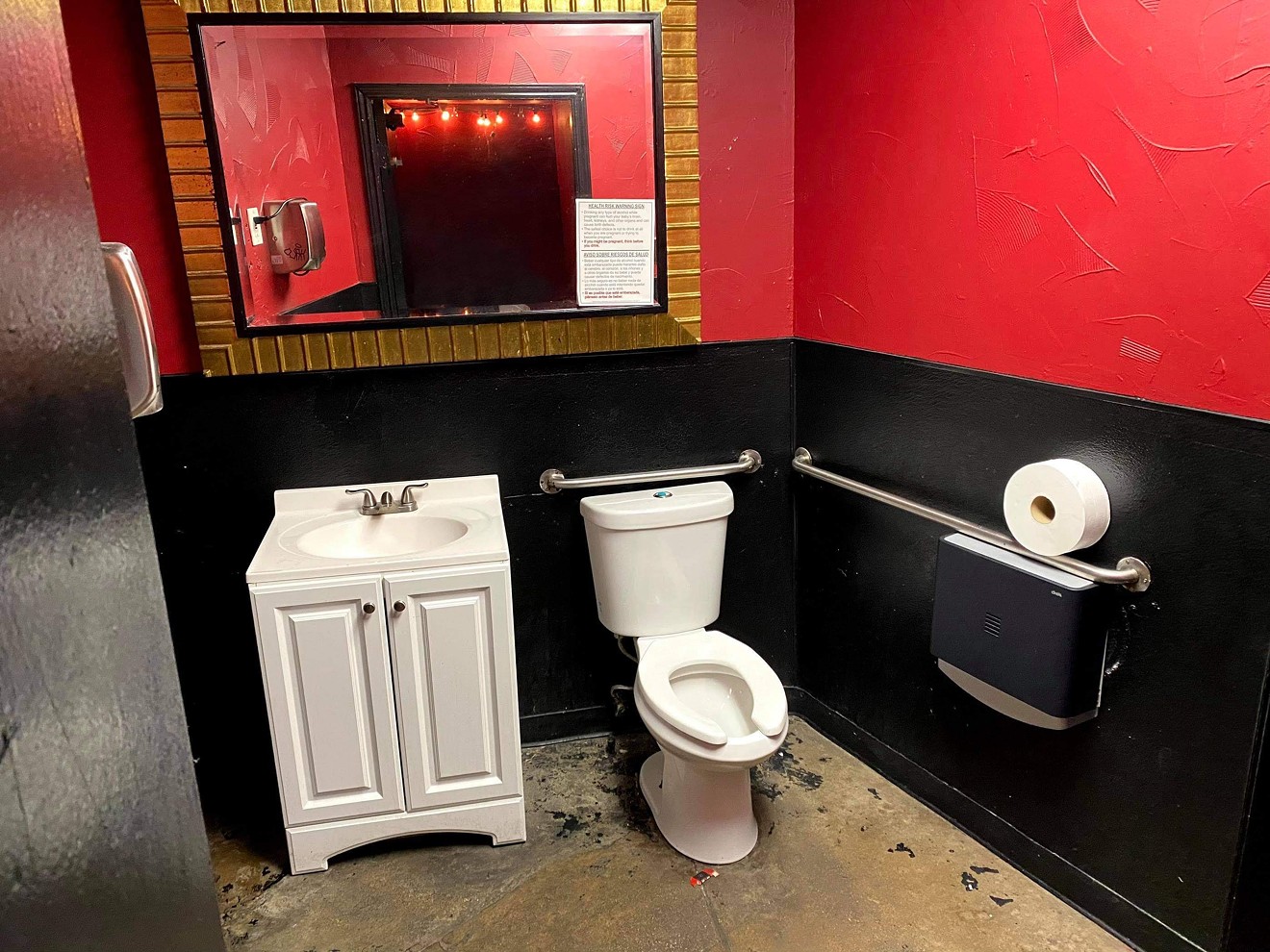 The Free Man's bathroom is one of the best places to let your butt be free. Kylie Valigura
When enigmatic local bartender and Deep Ellum denizen Marlee DeWeese recently posted, “My stomach is so fucked up I can literally give you a list of the best bathrooms to shit at in Deep Ellum,” we instantly had to get her picks of best bathrooms as an expert who has worked (and defecated) in Deep Ellum bars for six years. As high-brow purveyors of culture, we found this information useful for whenever you need to add some swank to your stank. Here's something you won't find on Yelp: a literal shit post that we hope can provide you some relief next time you're out and about in Deep Ellum and nature makes a booty call.

1. Twilite Lounge
2640 Elm St.
"Twililte for multiple reasons…” DeWeese says of her top pick. “Not only has it got good toilet paper, but they got Febreze ON DECK, ya heard me? Low traffic … I’ve taken multiple shits in there, like I’ve left the bar I’m at to take a shit in that joint and only maybe one of those times have I seen even one person waiting. Boom. Febreze, good toilet paper, and THEY GOT PEPPERMINTS IN A BOWL. Ya done! That ho’s always been clean, and it smells nice.”

2. Mama Tried
215 Henry St.
“For number two I’m gonna put out Mama Tried simply because there is an AGGRESSIVE amount of stalls in it so you never have to worry about no shit ever.

“Good stalls equals no witnesses because you got 12 other private stalls to choose from. That one I love in general because sometimes it lasts way longer than it should, and I don’t feel rushed. I’m comfortable. I could post up in that ho for over an hour and then you got music, too, so like, yeah … It’s number two for that reason. Toilet paper's mediocre but I’ll deal with it.”

3. Trick Pony
2823 Main St.
“Trick Pony’s number three, and it would’ve been higher up but then they switched to cheap toilet paper, so that kind had me fucked up, but…

"First of all, it’s low lights in that bathroom so you can just relax and, second, it's always clean —  so that’s even better.”

4. Monkey King Noodle Co.
2933 Main St.
“Not only is that A.C. on point which is … Bro, I be having to sweat when I shit sometimes, you know, because it just gets that detrimental.

“They got good toilet paper and they have a surplus, too, so if you use all the toilet paper because it’s just one of those days, they have the entire stash at arms' reach, so you don’t even have to worry about running out of toilet paper.”

5. BuzzBrews Kitchen
2801 Commerce St.
"Number five I’m gonna put at BuzzBrews because it has four private stalls. The whole structure of that bathroom is just insane to me, and I fuck with it big time. Big time. Even if you don’t have to shit you should just go look at it. Private stalls, low traffic, and the best part about BuzzBrews is that it's open 24 hours so if it’s 5 a.m. and you need to shit, ya done! Its over. Boom.”

6. Cheba Hut
2808 Main St.
“Cheba Hut is low-traffic. Every time I take a shit there, there's no lines. The convenience of it, depending on how detrimental [the bowel movement] is.”

7. Twisted Root Burger Co.
2615 Commerce St.
“It’s cool, usually clean, and they have a surplus of toilet paper. Because it’s a restaurant and not a bar it has a bunch of people cycling through, though, so you will usually have at least one person waiting on you. Other than that, when you gotta go it is private.”

8. Armoury D.E.
2714 Elm St.
“Armoury is number eight because, once again: good toilet paper, smells nice, clean but that ho is close to impossible to deal with other than on the weekdays or, like, early when they first open on the weekends."

9. Harlowe MXM Rooftop
2823 Main St.
“Harlowe Rooftop is number nine because you have to get there early in the daytime. It’s impossible during brunch. It is nice and private, and they usually have a DJ going on, so no one fixing to hear shit coming from that bathroom.”

10. The Free Man, Frenchman Side
2626 Commerce St.
“Number 10 I’m gonna put Free Man, small side, for comparable reasons. You can go on the weekdays, but even on the weekdays, there's probably one or two people waiting. There’s always live music, so if you have one of them aggressive-ass violent shits that has you screamin’ in that bitch, ain't no one fixing to hear anything from the other side of that door. The cleanliness is always up to par.”
KEEP THE DALLAS OBSERVER FREE... Since we started the Dallas Observer, it has been defined as the free, independent voice of Dallas, and we'd like to keep it that way. With local media under siege, it's more important than ever for us to rally support behind funding our local journalism. You can help by participating in our "I Support" program, allowing us to keep offering readers access to our incisive coverage of local news, food and culture with no paywalls.
Make a one-time donation today for as little as $1.