The Mystiks' Frontman on Crafting Music for Play About Stonewall Riots

Hit the Wall was one of Joanie Schultz's first picks as the new artistic director at WaterTower Theatre. Jason Anderson
Ever wondered exactly what started the national gay rights movement? It’s something most of us weren't taught in high school. North Texans have been getting a glimpse of what kicked off a decades-long campaign during Addison-based WaterTower Theatre’s newest play with support from local musicians.

Hit the Wall depicts the 1969 Stonewall Riots, in which a routine police raid in New York’s Greenwich Village became a foundational moment for the modern gay rights movement. Written by Ike Holter, it premiered at Chicago’s Steppenwolf Theatre in 2012.

WaterTower’s development and media relations manager, Garrett Reeves, says Holter gives a lot of artistic freedoms to the actors and director in terms of performance and music. “He is very vague in his stage directions, so a lot of it is left up to the specific performance,” Reeves says.

"Every single night, I would come home, smoke a blunt and listen to another album from 1969 as I read the script." – The Mystiks frontman Ivan Dillard

This allowed the theater to cultivate a band — in this case, the Dallas-based psychedelic pop outfit The Mystiks — to provide the play’s backing soundtrack. The Mystiks are fronted by Ivan Dillard, a 31-year-old transgender man.

“It’s been the biggest opportunity of my career,” Dillard says. “It was great working with people who more or less trusted me, so I didn’t feel too pinched or pressured when it came to writing. I basically immersed myself in everything 1969.”

This wasn’t hard for Dillard, he says, because The Mystiks are already that type of band.

“Every single night, I would come home, smoke a blunt and listen to another album from 1969 as I read the script,” he says. “That pretty much helped me in my creative process. I didn’t find it difficult because I’m not writing something against my own taste. These songs could have been Mystiks songs if I didn’t write them specifically for this play.” 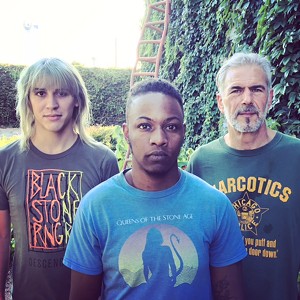 courtesy of The Mystiks
Dillard says the songs his trio performs during Hit the Wall capture the energy that the counterculture movement of the 1960s instilled in generations of people.

“Queer culture is always a few years ahead of straight culture, or mainstream culture, because it is always on the edge,” Dillard says. “Whatever broke through in the ’70s was already the energy of 1969 because a lot of shit was going down.”

By “a lot of shit,” Dillard means that Americans were beginning to rebel against the country’s institutional way of thinking.

“[The play] has an energy that I think will inspire audiences to look not only at this event but also what it means to be part of a movement in a different way,” artistic director Joanie Schultz said in a press release. “It asks us to look at the diverse group of people who are simply trying to fly under the radar and live their lives and see how they unintentionally become part of an event that changes history.”