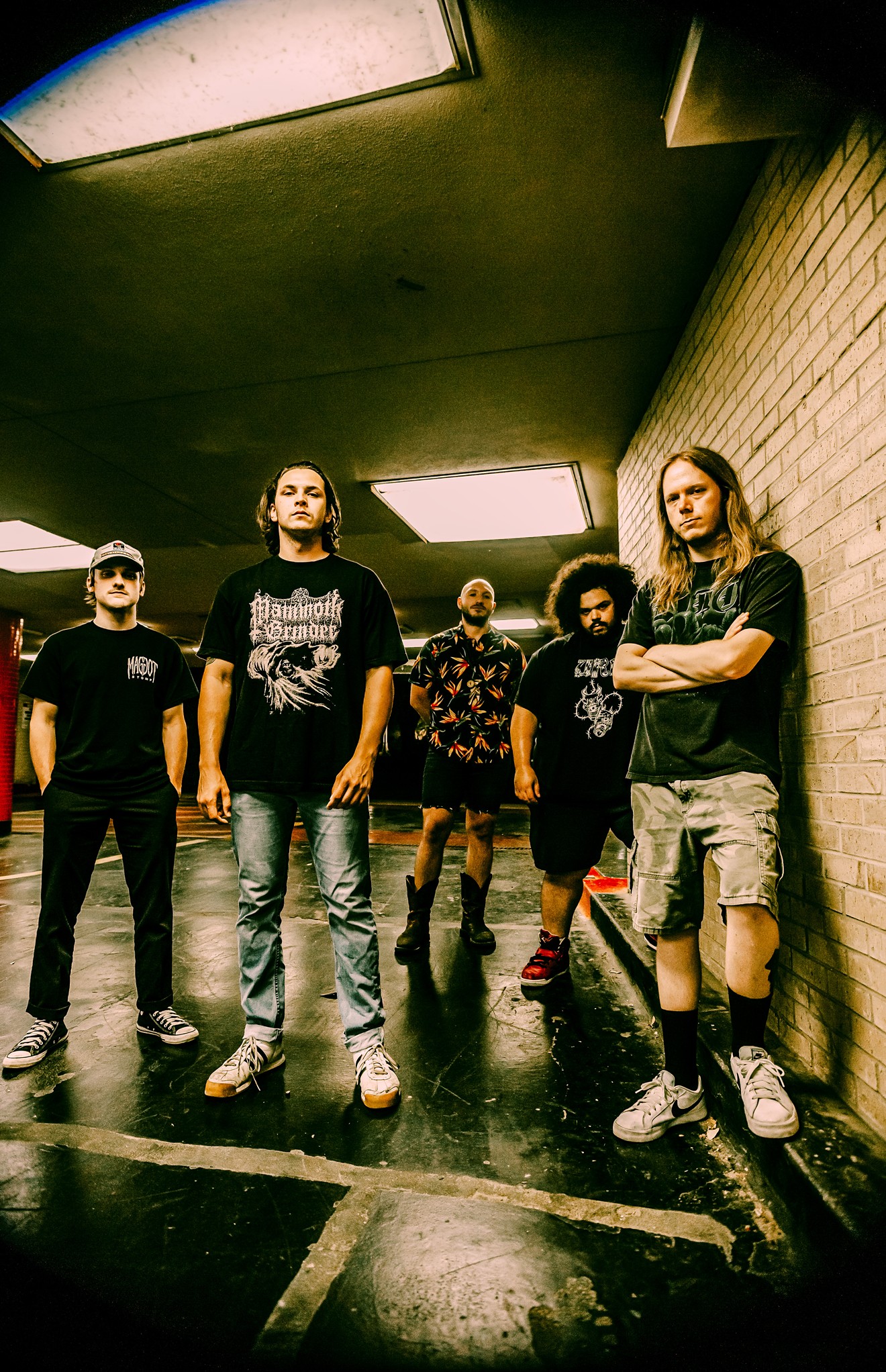 Every day after school, Holland began practicing his vocal style by listening to Suicide Silence and Matt Honeycutt from Kublai Khan, a metalcore band from Sherman. He turned to YouTube to learn how to perfect it.

“It took me a while to figure out,” Holland says. “You kind of have to do heavy breathing and push a lot of air out of the diaphragm and start making little sounds like grunting to get it started. But don’t use your vocal chords because it will destroy them.”

“He was so good, and it was just his stage presence and saying things between songs,” Holland says of Gale, who died in 2020 at age 34. “Cool shit, a certain magic that he did. I didn’t copy him but was inspired.”

In 2020, during the pandemic, Holland’s practice paid off when he joined Texas death metal act Tribal Gaze. A year later, the band released its first EP, Godless Voyage, and followed with a full-length release The Nine Choirs in September from label Maggot Stomp. The recordings garnered praise from Revolver magazine in a Sept. 14 report and a comparison to Morbid Angel and Obituary.

Tribal Gaze just came off a three-month tour with Creeping Death, playing “badass shows” across the U.S. and three days in Canada.

“We got hit up by Creeping Death, and we love those dudes,” Holland says. “They’re a great band and we love watching them.”

“I think their collective talent is what jumps out, especially if you haven't seen or heard them before,” he says. “Every night I'd watch the crowd go from 'Who is this band?' to 'Holy shit, this is the heaviest band ever' and losing their minds. They have enough riffs, solos, drum fills and killer vocals to get you hooked after their first song alone.”

Online users agree. Tribal Gaze shared its Spotify stats for this year in early December, which revealed more than 340,000 streams of this holy shit music.

The tour, Pemberton says, led to the bands' closeness. A few of the Tribal Gaze crew hadn't traveled often, and Pemberton says it was “sick" watching them experience their first time in a ton of places and enjoying all the standout moments for the Dallas and East Texas bands.

“One of my favorites,” he says, “was early on when the tour package — [shoutout] to 200 Stab Wounds and Ingrown — [when we] shared an Airbnb on an off day around Mesa, Arizona. We grilled out and partied all night and we pretty much figured out right then that we were all gonna be good friends and the tour was going to be a blast.”

Several stops on the tour with Creeping Death stood out to Holland, including one at a small venue in North Carolina. It was a place where he wasn’t expecting a huge crowd, especially since only a few people were hanging outside and waiting for the show to start. When the doors opened, a large crowd flooded the small venue.

“They’re our favorite shows to play,” he says. “The energy is a lot more and through the roof. It’s closed-in with a lot of people still having a good time. I just loved the crowd everywhere.”

Remembering Tribal Gaze’s early beginnings, Holland says that guitarists Quintin Stauts and Ian Kilmer were hanging out one day during the pandemic and just started making riffs. They were, like, “Damn, super sick,” and started writing songs.

“Every night I'd watch the crowd go from 'Who is this band?' to 'Holy shit, this is the heaviest band ever' and losing their minds." – Creeping Death's Trey Pemberton


Holland had known the guitarists for a while and had seen them at a bunch of local shows in East Texas, where the death metal scene isn't huge but it's powerful. Holland had been laid off from his job and was wanting to do music.

Stauts and Kilmer began reaching out to their friends to get something rolling. They contacted their friend Zachary Denton to play bass and asked Holland to sing. They found their drummer Cesar “Ceezbone” De Los Santos on Instagram.

Tribal Gaze, Holland says, was actually going to be a song title. The members had jumped through several band names and found one they liked, only to learn that another band was using it. Later, Stauts and Kilmer were writing lyrics for what would become known as “Godless Voyage” and considered naming the song “Tribal Gaze,” but Holland says they “thought that name was super badass” for a band name.

“That song is about people showing up to a tribe or an island where indigenous people live and trying to push their religious views on them,” Holland says.

They recorded the Godless Voyage EP in Kilmer’s house and dropped it in 2021 through Desert Wastelands Production. Holland says it didn’t blow up but did get a lot of attention.

That attention led to an offer from Maggot Stomp to re-press Godless Voyage and do their next full-length The Nine Choirs, an album that Stauts told Revolver “has its own gravitational pull, an album that will make you horrified of heaven, and an album that transcends trends and phrases.”

Tribal Gaze’s signature Texas groove can be heard in "pendulum-like rhythms," as Revolver pointed out in the September review. Songs such as “With This Creature I Return,” “Jealous Messiah” and “Shapeless Sovereign” don’t necessarily strike fear of heaven but more like terror over the way people use organized religion to persecute others who don’t fit their view of the world.

Holland says that “With This Creature I Return,” for example, doesn’t offer a message but is “aimed at organized religion and how it’s being used as a tool for evil and power.”

Tickets for Tribal Gaze and Creeping Death are on sale now.
KEEP THE DALLAS OBSERVER FREE... Since we started the Dallas Observer, it has been defined as the free, independent voice of Dallas, and we'd like to keep it that way. With local media under siege, it's more important than ever for us to rally support behind funding our local journalism. You can help by participating in our "I Support" program, allowing us to keep offering readers access to our incisive coverage of local news, food and culture with no paywalls.
Make a one-time donation today for as little as $1.