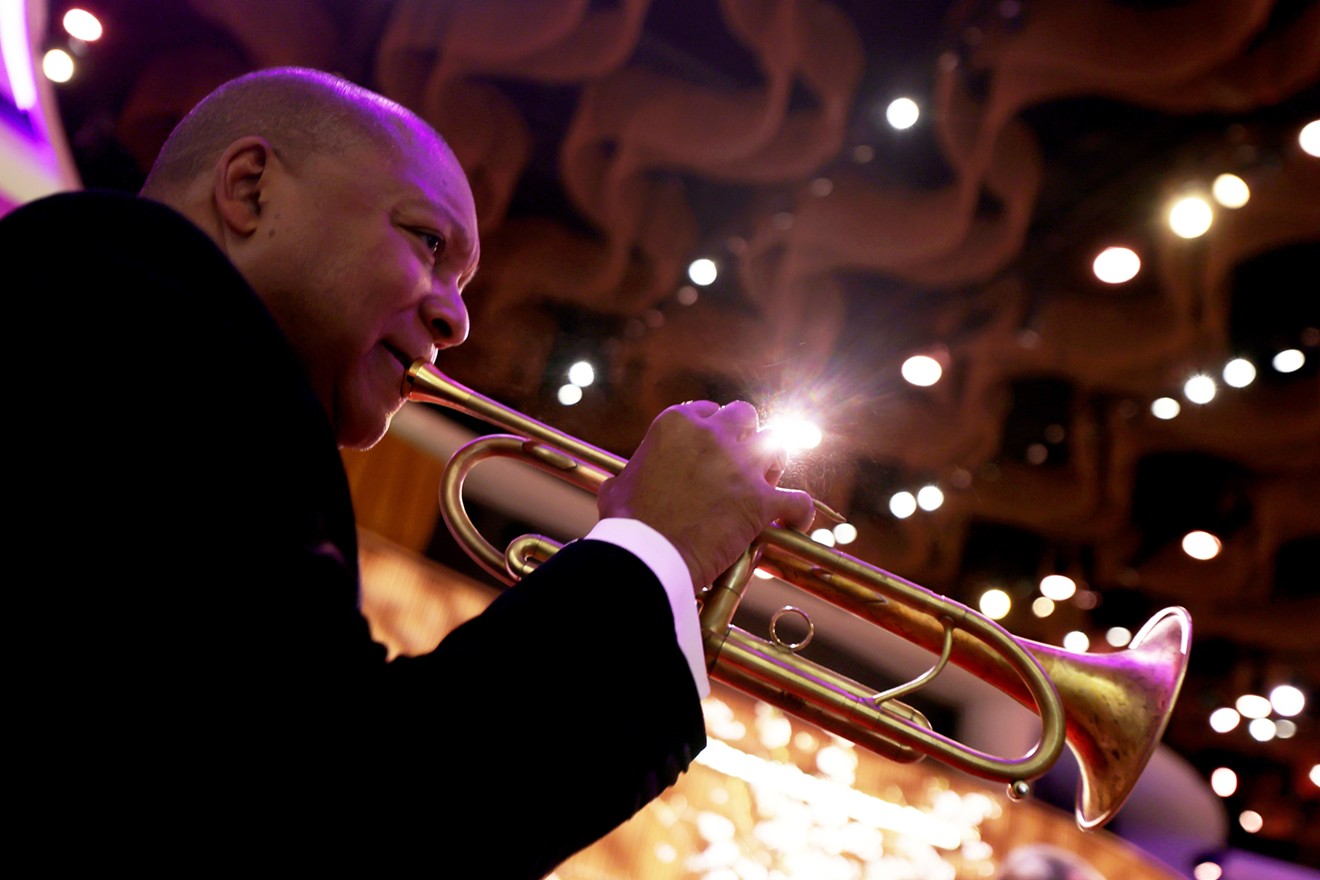 Wynton Marsalis is coming to Denton, and one note from his trumpet will blow you away. Michael Loccisano/Getty
North Texas has just enjoyed two of the best concert weeks ever, with tour stops by Elton John (in his last North Texas appearance), Flaming Lips, Wu-Tang and Nas, Smashing Pumpkins and Gorillaz, among so many others. But one of the biggest names in the music industry is coming our way, and jazz heads will surely explode.

In the world of jazz music, there are players, there are greats and there are giants. Beyond that, there’s Wynton Marsalis who is, without question, a jazz god.

The trumpet player and composer was perhaps divinely destined to become a luminary contributor to American music. The New Orleans-born, Juilliard-educated nine-time Grammy winner is a recipient of the National Medal of Arts (bestowed by former President George W. Bush), and the first jazz musician to receive a Pulitzer. In 1997, Marsalis received that honor for an oratorio called Blood on the Fields, which tells a story about two slaves.

Now the honor is all ours, because Marsalis will be coming to North Texas.

The University of North Texas in Denton will host Marsalis for a performance with his 15-piece Jazz at Lincoln Center Orchestra at 7.30 p.m. on Friday, Nov. 4. The opening band will be UNT's own One O’Clock Lab Band.

The university's prestigious music program has fostered talent through the decades such as Norah Jones, Don Henley, Meat Loaf, Roy Orbison, the members of Snarky Puppy and Maren Morris. It's the first university to develop a jazz studies program, and Marsalis’ visit coincides with the 75th anniversary of the program.

UNT alumnus and Grammy-nominated bassist Wes Stephenson, who plays with jazz band The Funky Knuckles, remembers the time he got to see Marsalis perform at Sandaga in Fair Park.

"Years ago I had the good fortune to hear Wynton play at an invite-only jam session in Dallas," he says. "Some of the best players in town were there. Those guys played all of their hottest and sophisticated vocabulary. Wynton murdered them all using the simplest triads. What he did differently was instead of crazy notes he used some of the slickest rhythm and phrasing I’ve ever heard. I learned a very valuable lesson that night. Rhythm and phrasing [are greater than] fancy school-bought notes."

"Wynton Marsalis is one of the most relevant and consummate musicians of our time. His ability to remain true to the foundations of jazz while consistently innovating within the art form is why the youth of today are still inspired by his past and current work." – Ashleigh Smith


Kwinton Gray, a Dallas Observer Music Award Best Pianist winner, says, "Wynton Marsalis is one of the most prolific jazz artists still around, who has remained adamant on maintaining the tradition of jazz and classical music and keeping it alive and well."

Marsalis will also be awarded a citation from UNT president Neal Smatresk "to honor his role in shaping jazz music as a musician, composer and educator," according to a press release.

Members of Marsalis' orchestra will teach master classes to the school's music students on Nov. 5.

“We are beyond thrilled to welcome Wynton Marsalis and the Jazz at Lincoln Center Orchestra to campus this semester,” said John W. Richmond, dean of the College of Music, in the press release. “These artists reside at the very pinnacle of excellence in jazz performance, jazz composition and jazz advocacy.”

"Wynton Marsalis is one of the most relevant and consummate musicians of our time," she says. "His ability to remain true to the foundations of jazz while consistently innovating within the art form is why the youth of today are still inspired by his past and current work. His love and passion for the youth and moving the music forward is why he continues to be one of my biggest inspirations."

Even crazier, tickets for the show are only $30.
KEEP THE DALLAS OBSERVER FREE... Since we started the Dallas Observer, it has been defined as the free, independent voice of Dallas, and we'd like to keep it that way. With local media under siege, it's more important than ever for us to rally support behind funding our local journalism. You can help by participating in our "I Support" program, allowing us to keep offering readers access to our incisive coverage of local news, food and culture with no paywalls.
Make a one-time donation today for as little as $1.