When Barbara Bush Spoke to a Dallas Motivational Convention, She Made Everybody Calm Down

Barbara Bush could make an entire arena of adrenaline-crazed savages sit down and be quiet just by lifting her hands. David Valdez, White House Photograph Office/Wikipedia
Because I’m not very good at remembrances — can’t remember — and because Jacquielynn Floyd at The Dallas Morning News just wrote a wonderful tribute to former first lady Barbara Bush that I know I can’t match, I wish I could just shut up, but, you know. Can’t. I have to tell you my only Barbara Bush story.

At some point in the mid to late 1990s, two to three years after President George Herbert Walker Bush left office, I was working for The Houston Chronicle here in Dallas. My title was Dallas bureau chief. There was a terrible problem at daily newspapers in those days with title inflation. A wheelbarrow full of newspaper job titles would buy you a cup of coffee.

My job was to sit by the phone, take little micro-naps and then leap as if lightly grazed by a bullet whenever the state editor called and told me to do something. So one very hot August day, I’m dozing, the phone rings and Kit Frieden, my boss in Houston, tells me that Barbara Bush, the recent first lady, is going to be at Reunion Arena in five minutes.

There was no conversation about it. No conversation was necessary. She told me. Barbara Bush. Reunion. Five minutes. I jumped straight out of the 10th floor window of a downtown high-rise and flew to Reunion Arena in my red cape, figuratively speaking. I was younger.


Barbara Bush thought it was great that they were worried about morality, and the good thing about worrying about morality, she said, was that you can do so much about it without ever leaving the comfort of your home.

Only, of course, it wasn’t five minutes. I got there more like an hour and a half before she was to speak. In order to get in, I had to blah-blah my way past some kind of nerds in suits sitting at a table who wanted me to pay them 500 bucks for admittance. I scoffed.

I explained that I was with the media and that this had to do with the presidency. I told them that we pay nothing for nothing, not never, not ever, zip, that’s it. They let me in, of course. I’m saving that line for St. Peter.

It was some kind of inspirational, motivational salesmanship-fest of a sort that Dallas in that era used to host every month or so. I believe this one was put together by the late Zig Ziglar of Dallas, who kind of invented motivation. Ziglar is the guy who said, “Every sale has five basic obstacles: no need, no money, no hurry, no desire, no trust.”

To which I would have said, “No go.” Needless to say, mine was not the kind of advice anybody at Reunion Arena had paid five bills to hear that day.

The arena, as always in summer, was very poorly air-conditioned. When I got in, it was already wall-to-wall with young white men in white shirts and ties, jumping up and down as the speakers motivated them, spraying sweat and spit in every direction, eyes spinning like pinwheels, every single one of them completely hypnotized and jazzed about getting rich. It was very tribal and not a little scary. I sort of pasted myself against a wall and tried my hardest not to look like a sales obstacle.

There was a lot of buzz about Hollywood in the news at the time, and the reason for it is one of those things that I embarrassingly cannot remember now. Some quick Googling tells me 1996 was the year of the great “Hollywood Blackout” at the Academy Awards, strangely named because it was about the awards event being entirely and perfectly white. A white-out? And we think now that racism in Hollywood is a new problem.

When the speakers derisively referred to Hollywood, I thought I sniffed a certain taint of anti-Semitism, but then I always think that, and I’m not even Jewish. Go figure. Bottom line, I didn’t like being there. In fact, I hated it. But when the editor in Houston calls, you go, even if you are the bureau chief.

Lurking in the shadows, I gazed out into the sweaty miasma of gyrating arms and waving fists. I watched. I couldn’t make out any connection at all between what the speakers were saying and the roaring cheers of the crowd. It seemed to me the crowd waited only until the mid-sentences of the speakers and then began roaring gibberish at them before the speakers had even said anything.

I remember wondering: If you take Zig Ziglar, the five fundamental sales obstacles and fundamentalist Christianity, pour them all into the same wineskin and shake them up vigorously, what do you have? A lot of masculine sweat, for one thing. The place reeked.

When Mrs. Bush finally entered stage-left, the already totally hysterical crowd burst into a kind of screaming primal war dance, so insanely thrilled were they to see this person whom they revered as the great queen mother of success. She grasped the podium and beamed at them with that wonderful bright smile of hers, letting them go at it for a while. Then she lifted both hands in a grand soft gesture that was at once royal and motherly, ordering them to sit down and be quiet. And they did. For about two seconds.

The instant she began to speak, they were on their feet again, screaming gibberish. She smiled again. Lifted her hands. Made them sit down again.

When she started talking, she addressed the Hollywood thing. She said she had been listening from the wings, and she understood that there was a great deal of concern about Hollywood and its effect on the morality of the nation. They tried to jump up and scream at her again, but she signaled them back into their chairs.

I had no idea what to expect from her. I’m a Democrat. I hadn’t ever really listened to anything she or any other Bush had ever had to say. I think I expected her to utter a lot of haughty WASPy denunciations of the Great Un-Motivated.

But all of a sudden, I was listening to my tough, pragmatic Middle Western mother, to my grandmother descended from Kansas pioneers, to my grandfather the self-made immigrant, to every solid, sane, American voice of authority I had ever known and trusted in my life.

She told them to forget about Hollywood. She told them Hollywood was far away and strange and not really meaningfully connected to their lives. She thought it was great that they were worried about morality, and the good thing about worrying about morality, she said, was that you can do so much about it without ever leaving the comfort of your home.

Tend your own moral garden, she said. Get home on time at the end of the day. Spend time with your spouses and your children.

That’s where morality comes from, she said. It doesn’t come from Hollywood. It comes from your homes, and then eventually morality may get to Hollywood, although that would be a very arduous journey. The five basic obstacles to morality, she suggested, are all at home.

They were silent. It was as if somebody had gone in there with a giant firehouse and soaked them all down. The buzz was absolutely gone and dead. By the end of her speech, the applause had gone from tepid to just about chilly. This was not what anybody had paid 500 bucks for. 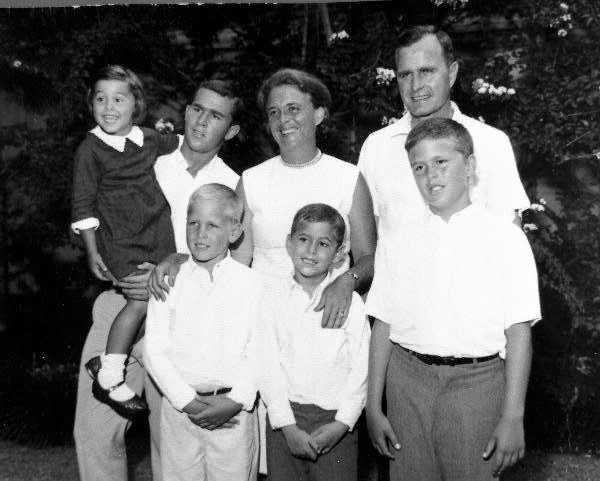 The young Mrs. Bush with family.
Quadell/Wikipedia
When the house went cold, I watched Barbara Bush intently, waiting to see if she would feel the chill, get uncomfortable and maybe try to get them back. Maybe she would say, “But the most important thing is to sell people a whole lot of stuff they don’t need!” And all of sudden they would all leap to their feet as if grazed by bullets and resume slavering and speaking in salesmanship tongues.

But, no, not one bit. She was solid as a rock, smiling every bit as confidently and graciously as she had when she first came out from the wings to their roaring applause.


Barbara Bush did want to persuade us. But she spoke to us without needing or craving our arm-waving, jumping-up-and-down approval.

She wasn’t political. She wasn’t WASPy. She was American. And here’s the thing that really separated her from that huge mass of males in the arena that day, probably including me, if I’m honest: She did want to speak to us and convey important meaning. She did want to persuade us. But she spoke to us without needing or craving our arm-waving, jumping-up-and-down approval. Mixed in with the graciousness and charm was something like, “Take it or leave it, boys.”

I don’t remember how it ended. I don’t remember what I wrote. I can’t find it now online. It was predigital. We used to just write stuff on animal skins and then go stand on a balcony and declaim the news aloud to the masses. It was called “print.”

But I do recall being very glad that my editor in Houston had awakened me and dispatched me in my cape to sweaty Reunion Arena on that very hot August day. I went home that night with a sense of having touched history. And I was on time. On the way, I remember thinking, “Wow. What would it be like if a woman were president?”