It’s Christmas, So I Review All the Worst Things Said About Me in 2019 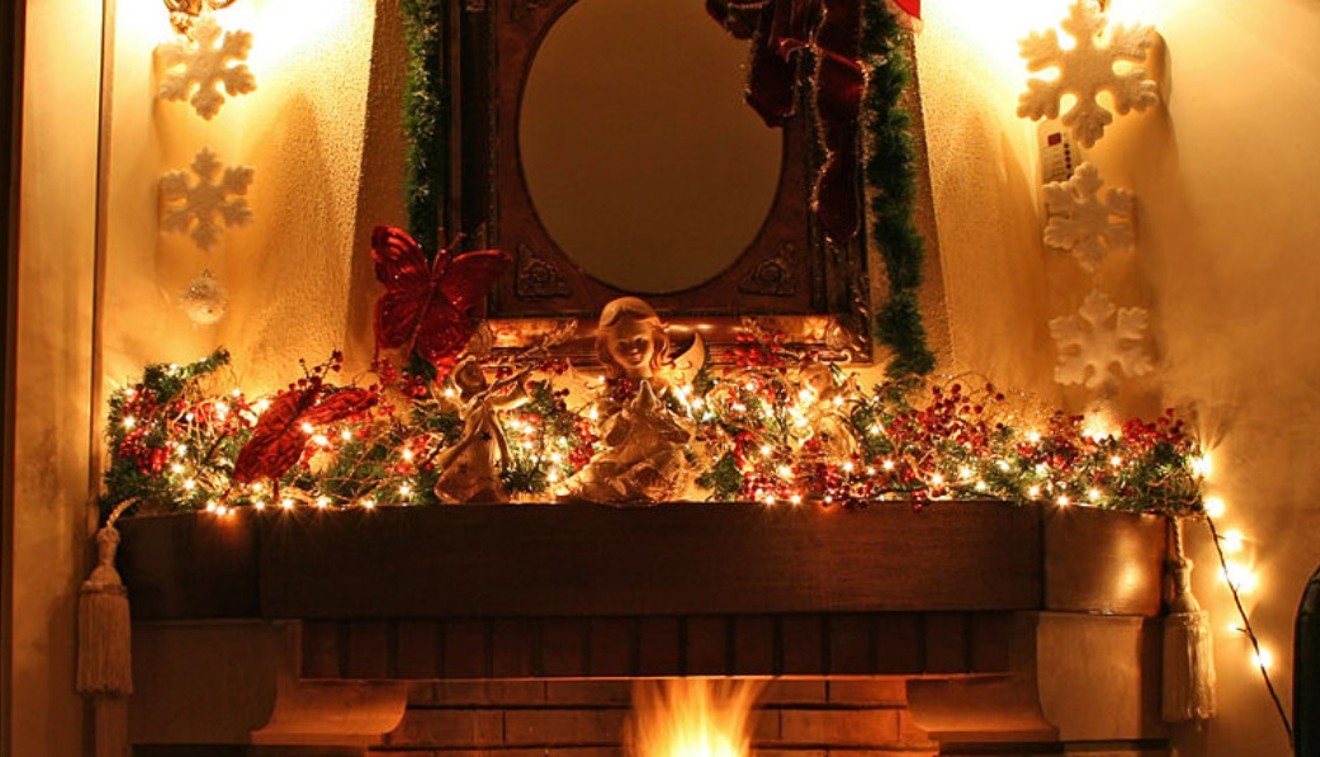 Carols on the stereo in the background. As happens every year when I do this, my cup runneth over. I think I’m going to need a mop by the time I’m done. It’s something I do because it completes me.

Dylan Richardson asked me just recently on Facebook, “Hey Jim, have you tried not being a fucking piece of shit? No wonder your family hates you.”

Boom! I do this exercise, because I care.

The months of September and October were especially busy in the very animated criticism department, not so much for anything I wrote for the Dallas Observer but more for posts I made on my personal Facebook page. In that period I was posting a lot on Facebook about the Amber Guyger and Atatiana Jefferson cases.

Jefferson was a 28-year-old black woman shot to death in her mother’s home in Fort Worth on Oct. 12 by a white police officer, now indicted for murder. Her horrible death followed closely on the heels of the Oct. 1 guilty verdict in the trial of 30-year-old white, former Dallas police officer Amber Renee Guyger.

Guyger, who shot and killed 26-year-old black accountant Botham Shem Jean in his own apartment in 2018, told police she had mistaken Jean’s apartment for her own in the same building and took Jean for an intruder. It was also a truly awful case.

“Jim has his crackpot side, which surfaces from time to time.” — Bill Marvel

But I don’t expect readers to make any distinction at all. Whatever I write, wherever it appears, it’s all on me.

I never wrote anything anywhere exonerating the Fort Worth cop in the Jefferson death. I did say I thought the fact that Jefferson was pointing a gun at him when he shot her, according to a witness who was her own family member, would turn out to be important in an eventual trial.

Greg Marcy da Gama commented on my post: “You’re absolutely part of the reason that I left Dallas. I hope others find sanctuary elsewhere as well.”

Bruce Levy, often a supporter, said, “Jim, enough with the mansplaining. You're embarrassing yourself.”

Anthony Emmanuel Bond said, “Jim Schutze, how in hell or Heaven, can you purport to play God this way? There is no way you should be concluding this BS.”

Ron McCracken said, “Jim, you've lost your mind on these race issues. That pig assassinated her. HER house, MIDDLE OF THE NIGHT, and that PIG is PROWLING around with a flashlight, never once identifying himself. P.S. I hope that pig gets a life sentence for murder.”

Justin Julian wrote: “Jim, once again, you're so far gone on this that you are barely within reason … What happened to the journalist instinct, man? You used to be savvy. Now it's just ‘if a cop says it, I believe it’”.

My Guyger posts earned an even bigger eruption of revulsion. I never wrote anything exonerating Guyger, but I said there was no plausible explanation for the shooting other than a terrible mistake. I said I thought a true mistake could not be reasonably construed as a racial hate crime. I also drew fire for suggesting that a witness in the trial who died later in a street shooting was a thug. (I must point out that, as things developed later, he was.)

Jason Redick said, “Your thoughts on this topic aren't even something I'm interested in anymore. You've made horrible accusations against the two Black men who have been killed, and you've defended the white woman (the killer) at all costs. Thinking you were someone who understood racial dynamics in Dallas was the ride we got taken for.”

Jorge Ernesto said, “Dammit Jim, I waited all day yesterday and this tepid boilerplate about quotidian racial anxieties is what you came up with?”

Former colleague and longtime Dallas Morning News critic Bill Marvel wrote, “The worst mistake a columnist can make is to assume that he is writing what everyone is thinking and feeling.”

Later Marvel wrote, “That Schutze is so obviously taking up Amber Guyger's case is puzzling — even troubling. Jim has his crackpot side, which surfaces from time to time.”

Marvel said in another comment: “Just between you and me, Jim, there is a certain point in our lives when we come to stick to our ideas as tenaciously as any toddler … What this town needs is a good — young — media critic.”

A Facebook member who goes by the name Ben Anderson David Hensley said, “I forgot how deranged you are when it comes to black people suffering violence at the hands of police.”

Chandler Grace wrote, “Aren't you supposed to be a journalist? Why don't you go find out what has happened all the previous times he has done this. God, you're just openly a racist piece of shit now, huh?”

Steve Davies said, “Pretty cheap click bait headline there Jim. I have come to expect this kind of sensational headline from most 'news' sources, but expected better from you.”

Christopher McAuliffe said, “Those cop boots must taste good, huh? Good enough to cure you of any embarrassment for your wasted life of middlebrow propaganda pushing, at least.”

Nathaniel Torres commented, “You're so racist fuck aren't you.”

Jimmy Johnson said in a comment, “You have lost legitimacy in this conversation and an honest columnist would recognize this.”

Johnson was my third-most prolific critic this year, exceeded only by Marvel, who is No. 2, and by writer Barrett Brown, who holds the all-time record as my critic with the greatest sheer word count.

Johnson wrote: “You have dishonored and abandoned any semblance of journalistic standard thus any reasonable minded person wouldn’t answer you because you simply aren’t invested in the solution. You have continuously mocked and been blatantly self-serving and flat-out immoral, don’t you think you can give your ego a break? 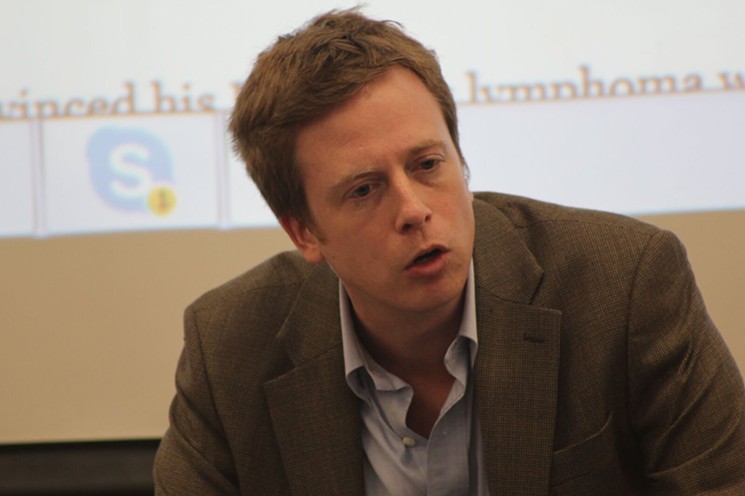 Barrett Brown attacked me for saying he looked high in a video he made this year.
Barrett Brown / Wikipedia
“You may want to wash your mouth out after writing this because I heard boot leather tastes awful.”

Twitter is always another rich source of opprobrium. In October, Amy McCarthy tweeted, “It is truly wild how the Dallas Observer’s Jim Schutze continues to blame Black people for their deaths, at the hands of police or otherwise.”


“Schutze, for instance, responded to my original post with a comment reading, in its entirety, ‘Huh?’” — Barrett Brown

Former colleague and online independent publisher Pete Freedman tweeted in July, “Everything I want to say about this latest Blue Bell mess makes me sound like Jim Schutze so I'm refraining.”

I don’t have any idea what that one was about. But … Blue Bell ice cream? I’m afraid even talking about it makes me sound like Pete Freedman.

In October, a Tweeter who calls him or herself Nervous Curtains tweeted, “The Jim Schutze meltdown of the past few weeks has been a wild ride. How long is the Observer gonna let this play out?”

I ask myself that every morning. Maybe Patrick Williams does, too.

Also in October, renowned Texas author and journalist Rod Davis tweeted: “Jim Schutze has become unreadable, at least for me. But it’s been coming for a while.”

At about the same time, Mark Steger said in a tweet, “All the nice things I've said about Jim Schutze's journalism over the years appear to be no longer operative.”

Barrett Brown, far and away my most prolix detractor is … he is … well, I don’t want to even try to say what he is, because my trying to say what he is has always been the one thing that gets him the most angry with me. Wikipedia says, “Barrett Lancaster Brown (born Aug. 14, 1981) is an American journalist, essayist and satirist. He founded Project PM, a research collaboration and wiki, to facilitate analysis of the troves of hacked emails and other leaked information concerning the inner workings of the cyber-military industrial complex.”

Wow. I don’t have a Wikipedia entry.

Some of his best anti-me screeds are a little difficult to follow, let alone explain, but from just one I may be able to tease out a few things. He says, “Schutze, for instance, responded to my original post with a comment reading, in its entirety, ‘Huh?’”

He said I had decided that he was “on drugs in the video. In fact I was in a manic state caused in part by sudden withdrawal from Paxil, which I wasn’t aware of until court shrink explained this was common; I did know I was rather emotional due to reducing my intake of Suboxone in recent days …”

He vows that one day he will “steal some shit out of Jim Schutze’s garage and sell it for heroin.”

As with Wikipedia entries, I have no garage.

Well, now here comes my favorite Christmas song on the stereo, “Santa Baby,” a happy ode to the moral corruption of Christmas, and I must get up and go put us all in the mood by turning up the AC enough for a good roaring fire. People say tons of kind and flattering things, too. I care about all of it. Have a fake beer on me and go regift somebody. I will see you on the other side of certainty.
KEEP THE DALLAS OBSERVER FREE... Since we started the Dallas Observer, it has been defined as the free, independent voice of Dallas, and we'd like to keep it that way. With local media under siege, it's more important than ever for us to rally support behind funding our local journalism. You can help by participating in our "I Support" program, allowing us to keep offering readers access to our incisive coverage of local news, food and culture with no paywalls.
Make a one-time donation today for as little as $1.