Dallas a World Cup Host in 2026? Some Say It's a Reachable Gooooooal 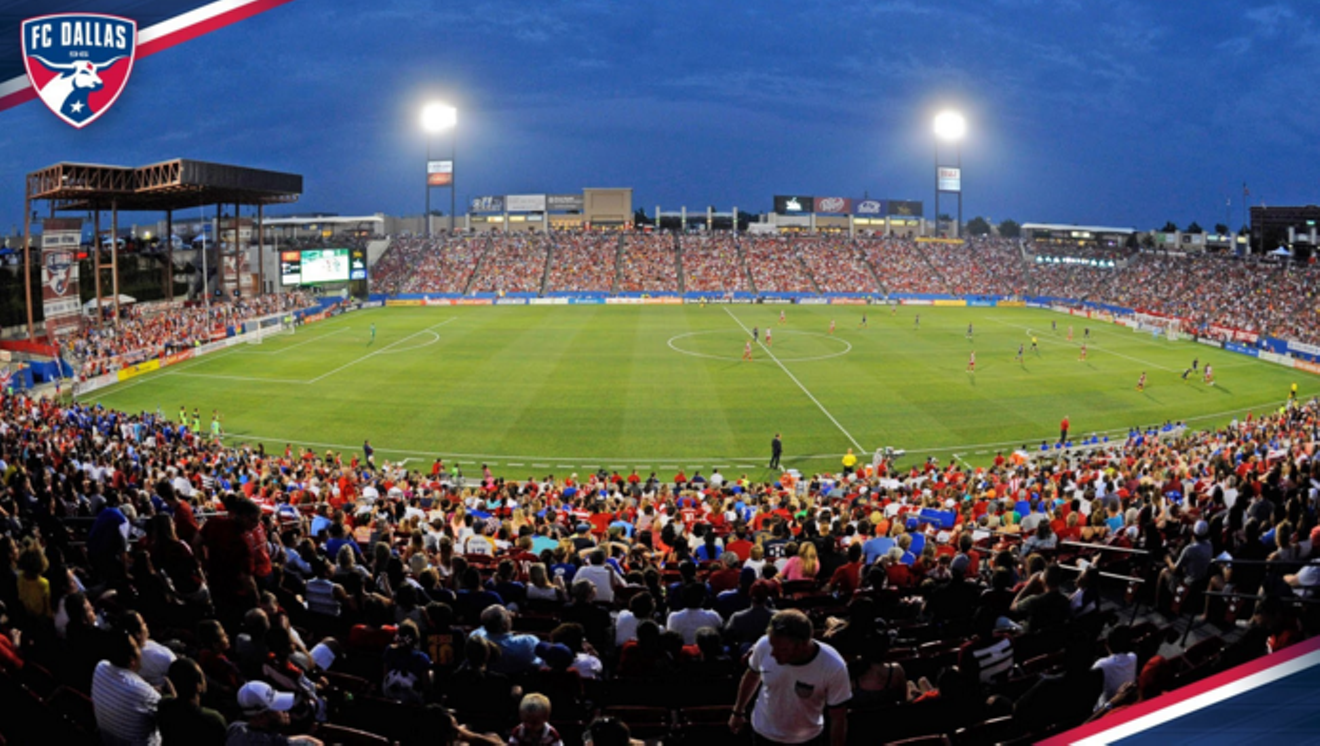 Could Toyota Stadium in Frisco host bouts for the 2026 World Cup? The city of Dallas thinks so, which is why it's trying to launch a bid with FIFA. FC Dallas at Toyota Stadium
Competing to be a host city for a global sporting event like the World Cup might seem like a feat akin to winning the lottery, but the city of Dallas, the FC Dallas soccer club and some soccer experts believe the city has a solid shot.

"We're very positive about the bid and positive Dallas will have a great opportunity," FC Dallas President Daniel Hunt says. "There's nothing quite like a World Cup, and we can do these great events, and this just puts us in line for events for the next 50-100 years."

Dallas' parks and recreation department has a plan in place to seek a World Cup bid from its global governing body, FIFA, in 2026. The event hosts 80 matches with 48 teams and is expected to draw a television viewing audience of 26 billion people, according to the park board's World Cup bidding plan.

Dallas will compete against 40 other cities for the 2026 games, 32 of which are in the U.S., Mexico Canada. FIFA officials will start visiting the host city sites next month and vote on an official selection in June. If no official city or cities are chosen, the bid decision falls to the next FIFA Congress in 2020, according to FIFA's bidding process guide.

One of the key considerations for a host city is infrastructure, but the list goes well beyond stadiums for matches. The host city also must be able to accommodate a large number of broadcasters sending footage of the games to every part of the world, as well as enough housing and hotel space for the crowds.

Dallas' World Cup bid lists venues such as AT&T Stadium in Arlington and the Cotton Bowl in Fair Park for game sites. Fair Park could also serve as an international broadcast center for the games for approximately 10,000 media representatives, as it did in 1994, the last time Dallas served as one of the host cities for the World Cup.

Hunt says those are just the major sites for any possible World Cup plans. Places like MoneyGram Soccer Park in Dallas and the University of Texas at Dallas could provide more spaces for training and practice. Other parts of the DFW's infrastructure plan, such as the centralized location of an international airport, provide additional advantages over other host cities.

"If you measure the distances, we're smack dab in the middle of it from north to south and east to west," Hunt says. "That's a gigantic advantage."

"This is why the U.S. and North America are such attractive places to host events like this because unlike the competition for 2026, like Morocco, they have to build countless facilities and worry about team base camps because countries literally come in and build their own facility and provide everything players need, and we have this unbelievable advantage."

Dallas might have a better-than-average chance winning a bid because of its history and involvement in professional soccer. Euan Hague, a professor of geography at DePaul University in Chicago, has written several academic pieces on the global impact of professional soccer and serves as a soccer commentator on Chicago's NPR affiliate WBEZ and the NPR show World View. He says Dallas is "the strongest city in Texas in terms of infrastructure and soccer culture in terms of Major League Soccer."


"The question is will people put politics aside, and given that they've voted for Russia and Qatar, politics may not be a factor." – Euan Hague

More fans in the area adds more interest for FIFA's voting committee, and Hunt says Dallas has a higher index for interest in soccer.

"It may cause a rise in attendance, and I say that because there also  who may warm up to a World Cup who might not be soccer fans at all."

North America as a whole is also in the rotation for FIFA's next World Cup location, Hague says.

"The previous World Cup in 2014 was in Brazil, 2018 was in Russia and 2022 [will be] in Qatar," Hague says. "Because Europe and South America held it in the recent past and North America hasn't held it since 1994, I think Morocco is the only other rival. One of the things that FIFA tries to do is pass it around and make it more continental, and Australia counts as Asia."

Hague points out, however, that changes in the federal government's immigration policies under President Donald Trump administration could create tensions or concerns among the FIFA voting body.

"We're talking about 10 years away, and things may change by then," Hague says. "The question is will people put politics aside, and given that they've voted for Russia and Qatar, politics may not be a factor."

The Department of Justice's crackdown on corruption in government sports goes back to 2015, and the racketeering indictments against nine FIFA officials could influence the choice.

"You can see where that sentiment might get into the minds of some of the people who are voting," Hague says. "However, in terms of facilities and pure logistics, a North American bid would be overwhelmingly favored."

Hunt says the city is smart to try for a bid despite any odds or downsides. The money that an internationally recognized sport can bring to the area would total in the millions and secure a space in professional soccer's history.

"I would say FIFA recognizes what's going on here," Hunt says. "They're paying attention to the growth of MLS and seeing other leagues do well in growth. I would say we have a strong chance to get the World Cup, and I'm very hopeful."