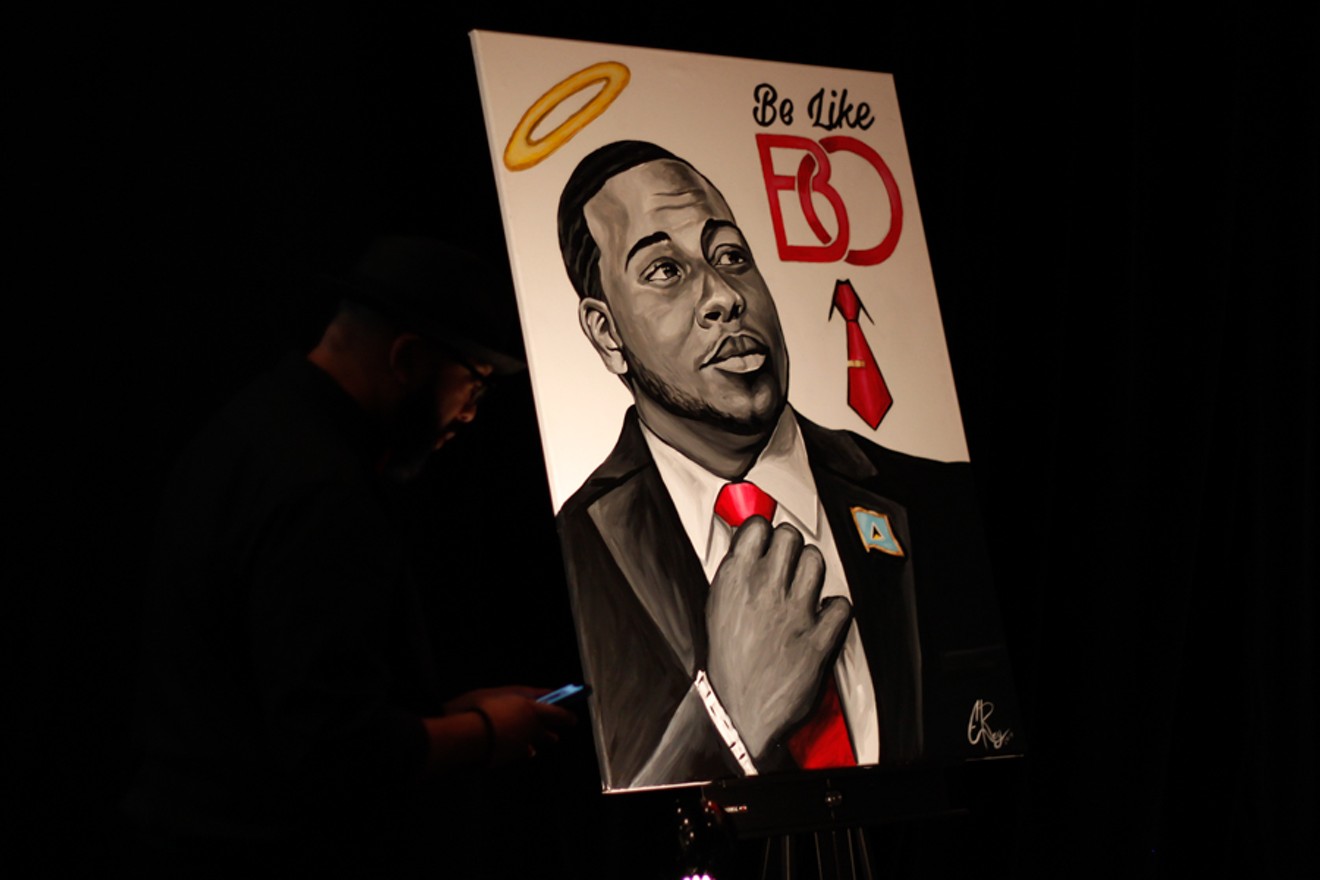 Local activists want to memorialize Botham Jean by naming a street after him. Nicholas Bostick
It was almost two years ago that off-duty Dallas police officer Amber Guyger shot and killed Botham Jean, a 26-year-old accountant, while he was watching television in his own apartment. Guyger said she mistook Jean's apartment for her own and thought he was a burglar. Two years later, protesters against police brutality in Dallas still shout Jean's name as they march through the streets.

Now, as monuments dedicated to Confederate figures come down across the country, local activists in Dallas are trying to change the name of Lamar Street, the street on which DPD's Jack Evans Police Headquarters is located, to Botham Jean Boulevard.

Lamar Street is named for Mirabeau Buonaparte Lamar, the second president of the Republic of Texas. A 2015 article in Texas Monthly titled "The Problem With Mirabeau Lamar" lays out reasons why Lamar's name shouldn't be attached to public facilities anywhere in the state.

As a Georgia state senator, Lamar fought to nullify federal laws and U.S. Supreme Court rulings regarding slavery and Native American removal. As president of the Republic of Texas, he signed an 1840 bill called “An Act Concerning Free Persons of Color,” which gave free Black people two years to get out of Texas before being sold into slavery. He also opposed the annexation of Texas into the U.S. because he supported slavery.

On Friday, North Texans gathered outside DPD's headquarters for a candlelight demonstration in support of the name change. Yafeuh Balogun, Pamela Grayson and Davante Peters, local community activists, are the main faces behind the effort. Balogun said the street name change would memorialize Jean and serve as a constant reminder for Dallas police of the mistakes that were made the night Jean died.

Efforts for the name change started with a Dallas man named Chris Norman about nine months ago, not long after Guyger was given a 10-year sentence for shooting and killing Jean. Norman started a petition to change the name of the street to honor Jean. He didn't expect much from it, he said, but it has since amassed nearly 50,000 signatures.

But it wasn't until May this year that the Botham Jean Memorial Committee was formed. With Norman's approval, the committee is using his petition in alignment with their efforts. On June 6, they hosted a virtual rollout meeting to discuss their strategy. Balogun said they have two options: They can take to the streets or try to get a majority of the City Council to support Botham Jean Boulevard. For now, they've chosen the latter option.

Either way, the change will come with a cost. Grayson did a lot of calling around to try to find out what the price tag on the project would look like. She got three sets of numbers, the largest being about $82,000.

The committee is hoping to apply the name change to all 5.8 miles of Lamar Street. By Grayson's calculations, the application fee for this alone will cost about $7,300. Upon approval, they'd then have 60 days to replace all of the blades on the roughly 40 signs on Lamar Street to reflect the new name. That could cost about $50,000. They'd also have to change all of the addresses on Lamar Street. By the city's calculation, this includes a little more than 720 addresses and would cost more than $18,000.

But Grayson said she doesn't care if it costs $1 million. She said the committee will fight for it. A GoFundMe campaign was set up on June 2 to help pay for the project. By Monday morning, it had raised $188.

The committee also has support from the Jean family. Jean's mother, Allison, and his sister Alissa Charles-Findley were both present during the rollout meeting in early June.


"Every [Dallas] police officer who gives the address for their police station will be calling my son's name." - Allison Jean, mother of Botham Jean

"We could not have chosen a better place to have renamed in my son's name," Allison Jean said. "Every [Dallas] police officer who gives the address for their police station will be calling my son's name."

Allison Jean said when her son was born, she knew he had come to change the world. Every day, she sees this coming to fruition.

Balogun, Grayson and Peters say what they are doing to memorialize Botham is just the start of something that they want to spread. Grayson is also involved in efforts to rename a street in Fort Worth after Atatiana Jefferson, a woman killed by a Fort Worth police officer,  and similar actions are being taken in other parts of the country.

A graduate of Harding University in Arkansas started a petition to rename its Beroge S. Benson Auditorium after Jean, who was an alumnus of the university. According to Fox News, the university president, Bruce McLarty, said there are plans to honor Jean significantly on campus, but renaming the auditorium wasn't a possibility. The committee in Dallas is hoping for more luck.

In Baltimore, a City Council member sponsored a bill to rename a Christoper Columbus monument to honor victims of police brutality. According to the legislation proposed by Ryan Dorsey, the council member, the monument's new name could be the "Police Violence Victims Monument."

In Louisville, Kentucky, community activist Christopher 2X and his organization, Game Changers, are trying to get a portion of Jefferson Square Park named after Breonna Taylor, killed in her home during a police raid. 2X announced this on what would have been Taylor's 27th birthday.

Balogun said all of these efforts are also about making the landscape reflect all of the communities that live there. Local author Edward Sebesta calls this "landscape reparations." Balogun said there are many streets in Dallas that represent a racist culture that isn't reflected in society's values today. Instead of having streets and monuments named after figures such as Lamar, Balogun said the city should have monuments and streets honoring upstanding residents like Jean.

There are many regulations when it comes to changing the name of a street. For one, a street name commemorating a person who has not been dead for at least two years is prohibited. By a 3/4 vote, the City Council can waive some of these restrictions, as they did for Nowitzki Way. If the City Council doesn't waive the two-year requirement, the first available date for the name change will be Sept. 6, the anniversary of Jean's death. So that's the committee's target date.

Until September, the Botham Jean Memorial Committee will be working to garner more support for the name change. Peters said they'll be engaging with their communities through events and social media campaigns. They also plan to visit the businesses on Lamar Street to try to get them on board with their project.

Balogun is confident they can get it done.

"I know it's going to happen," Balogun said. "I'm sure of it."
KEEP THE DALLAS OBSERVER FREE... Since we started the Dallas Observer, it has been defined as the free, independent voice of Dallas, and we'd like to keep it that way. With local media under siege, it's more important than ever for us to rally support behind funding our local journalism. You can help by participating in our "I Support" program, allowing us to keep offering readers access to our incisive coverage of local news, food and culture with no paywalls.
Make a one-time donation today for as little as $1.