The Fake Kayak Rapids is a vision of our road to the future if we don't make a change in the city's leadership. Jim Schutze
Last week, we learned that the Margaret McDermott suspension bridge over the Trinity River in downtown Dallas, designed by Santiago Calatrava and supposedly completed two long years ago, still can’t be opened to foot and bicycle traffic because engineers won’t certify its safety.

We really need to pause and think about what that means for the city. This stunning failure, after all, is only one in a line of ludicrously expensive catastrophes all brought to us by the same small crowd of influential people in the city’s old-guard leadership.

To explain this, I guess I have to explain what “Calatrava-designed portion” means. And, frankly, that gets us right into the mischief. The “Margaret McDermott Bridge” is actually four bridges, two of which are more or less fake.


Why multiple suspension bridges on flat land? There was much talk at the time of the proposed bridges as a great municipal art project. Think about that.

The two main and real bridges, one eastbound and one west, were built by the state to carry 11 lanes of Interstate 30 across the river. Those bridges opened in 2012 and have been rumbling with heavy traffic ever since without a ripple.

Originally, the old guard leadership wanted the entire bridge to be built as a suspension bridge, even though there is hardly anything out there to suspend over. This bridge was to be part of a series of Calatrava-designed suspension bridges up and down the river.

Why multiple suspension bridges on flat land? There was much talk at the time of the proposed bridges as a great municipal art project. Think about that.

In a city where half the residents are beset by grinding racial segregation and poverty — a city with monumental multibillion-dollar deferred maintenance needs — the old leadership wanted to spend billions of dollars building its version of a massive art project. It’s a vision worthy of a crazy dictator in a white suit wearing gold-rimmed sunglasses with a diamond-studded cigarette holder planted in his jaw.

Of course — obviously, inevitably, transparently — it turned out that enough money has not yet been printed in the whole wide world to pay for a thing like that, so the project was trimmed down. Dallas wound up with one short Calatrava-designed suspension bridge over flat mud, the Margaret Hunt Hill Bridge, and this second one, the Margaret McDermott, which is not a real suspension bridge.

The state built its two regular old freeway bridges for I-30, the ones with the cars and trucks, and then Calatrava designed two additional skinny bike and hike bridges — little narrow belts of concrete to be hung off the outsides of the state bridges like very long porches. Two enormous arches support the outer edges of the bicycle porches.

The Calatrava arches seem, to a layman, hugely bigger and higher than what it would take to support bicycles. It seems to a layman that the bike lanes could have been accomplished with a lot of bolts and some two-by-fours.

But the net effect of the arches is designed to make the four bridges together look like one gigantic suspension bridge if viewed from inside a limousine two miles away at night. I believe the technical artistic term for something like this is trump oil.

So, I’m no engineer, but all I know is that something about hanging a narrow band of concrete from arches way, way high in the sky apparently has proven to be dangerously jangly-bangly in big winds. The stubborn problem that has kept engineers from signing off on the safety of the bicycle bridge is a repeated cracking of the hanger-upper things at the ends of the cables that come down from the arches. So it’s an aerodynamic, jangly-bangly, hanger-upper problem.

The outcome no one wants to see, obviously, is high wind, a great big jangle-bangle and a gang of hapless cyclists flying off the porch to their everlasting rewards below. So the Calatrava parts of the project have remained closed.

The jangly-bangly bike bridges, built and paid for mainly by the city, cost $115 million. The state’s freeway bridges, carrying all that heavy traffic, cost $120 million.

The people who brought us this ludicrous catastrophe are the same ones who fought for almost 20 years to build an unneeded expressway on top of the river until finally, thank goodness, a newly woke City Council voted down the project.

These are the same people who were responsible for the infamous fake kayak rapids, still stuck in the middle of the river like a gigantic concrete thumb in the eye of Mother Nature a full year after the U.S. Army Corps of Engineers ordered the city to tear them out.

Who knows what will happen with the McDermott? A compromise might be to leave the arches where they stand, consider them decorations, which is what they really are anyway, and just chop off the bicycle bridge part. Cut the cables. Undo the things that hook the bicycle bridges to the freeway bridges. TIM-BERRR!

It’s not like the old guard types who got this thing built in the first place are going to be the ones riding their bikes across. Oh, sure, they’ll be in that limo two miles away, showing it off to their friends from New York and taking credit for it. Why should other people have to risk their lives to justify its absurd existence?

The problem right now is that, even in the face of these serial defeats and humiliations, the old crowd is not done devising things along the river. As soon as it became apparent that the unneeded tolled expressway along the river was not going to fly, Mayor Mike Rawlings got busy creating something called a limited government corporation, to which the city handed off control over the 10,000-acre city-owned floodway along the river.

That city entered into a “master development agreement” with the LGC, and the LGC announced soon after it would be collaborating with a group called the Trinity Trust, recently renamed the Trinity Park Conservancy. The Trinity Park Conservancy is the very same set of people who brought us the unneeded freeway project, the multiple bridges art project, the thumb-in-the-eye kayak rapids project and the jangly-bangly bike bridges.

Although the mayor contrived to give the private group sweeping authority over the entire river, the conservancy seems to be concentrating for now on one 285-acre area downtown to be called Harold Simmons Park. Somewhat reassuring was the recent announcement that the new head of the conservancy will be Dallas architect Brent Brown, founder of bcWorkshop, admired for his work as a forward-thinking urban planner. 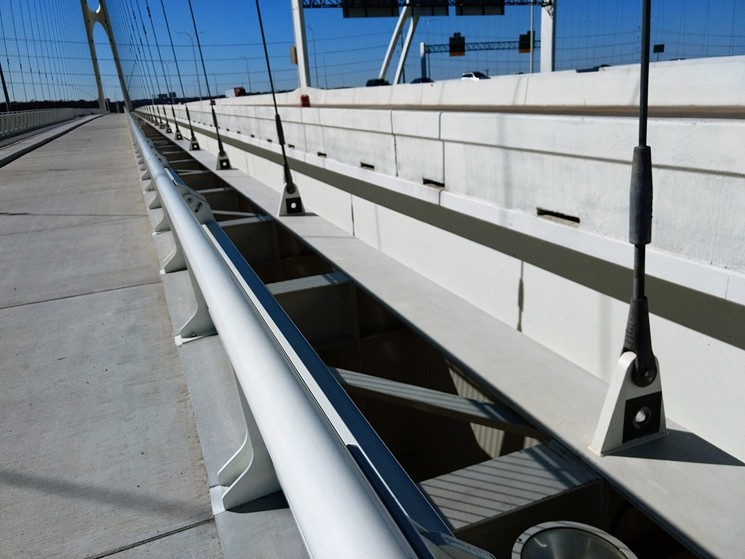 The bicycle lanes hooked to the edges of the I-30 freeway bridges, hanging from mile-high arches, seem to be dangerously jangly-bangly.
Jim Schutze
But the personnel behind the scenes remain the same. Board chair of the conservancy is Deedie Rose, widow of onetime Texas Rangers owner and George W. Bush associate Rusty Rose. Deedie Rose is a stalwart of the Calatrava set.

And Brown, for all his credentials as a forward thinker, has been a sharply controversial figure at times in city politics, closely identified with the old guard. In 2015, he inadvertently outed himself on some City Hall time sheets as working on a “Project X” in the southwest corner of downtown. Even when he did his best to smooth it over, Project X still looked a lot like confirmation of a long-suspected scheme by real estate interests associated with Hunt Oil and The Dallas Morning News.


More strikingly, in 2016 Brown was “co-facilitator” of a group that tried to force the last desperate breath of life into the doomed Trinity Toll Road project.

More strikingly, in 2016 Brown was “co-facilitator” of a group that tried to force the last desperate breath of life into the doomed Trinity toll road project. Brown is seriously respected as an architect, planner and all-around urbanologist, and it’s relatively good news that the conservancy hired him to be its CEO, compared with the people it might have hired.

But Brown comes, nevertheless, with a certain flavor of controversy born of his long, very public identification with an old guard group that has amassed a very bad track record. Anywhere Brown shows up, the people who have been on the other side of those battles are going to have their hackles up.

That brings me back to my original question. When do we add all of this up? The fact that the $115 million bicycle bridge still can’t be opened — and could conceivably never be opened — is scandal enough. But we have to add that to the fake kayak rapids. And those two things look like forgivable hiccups next to the Trinity toll road project, the single dumbest, longest, most expensive exercise in bad civic judgment in the city’s history, not counting the effort to turn Dallas into a seaport.

We probably just don’t know enough yet and haven’t seen enough of what is planned for the Simmons park to leap to any hard opinions about it. The conservancy has hired a Brooklyn and Cambridge-based architect, of course, for the same reasons the same people went so hard for Calatrava. Maybe they’ll come up with something much better than the projects they have championed in the past.

I’m not even really asking about that in particular, however. I’m saying that this is the same general set of people who have chosen our mayors for as long as memory serves and who have managed to set the city’s long-range agenda.

At some point, this stuff shouldn’t be funny anymore. The city wasted untold time, resources and energy on the stupid toll road. The same leadership that pushed that idea was behind the fake kayak rapids and the bad bicycle bridges. What a resume!

All of those concepts express a dated, pretentious materialism out of synch with the new urban-communitarian ethos of the city. That new ethos is the city’s great hope for the future. The old one is an anchor in the past. At some point, the city must cut the line to that anchor. Better sooner than later.
KEEP THE DALLAS OBSERVER FREE... Since we started the Dallas Observer, it has been defined as the free, independent voice of Dallas, and we'd like to keep it that way. With local media under siege, it's more important than ever for us to rally support behind funding our local journalism. You can help by participating in our "I Support" program, allowing us to keep offering readers access to our incisive coverage of local news, food and culture with no paywalls.
Make a one-time donation today for as little as $1.