Margaret McDermott Is not Much of a Suspension Bridge, Barely a Bridge at All 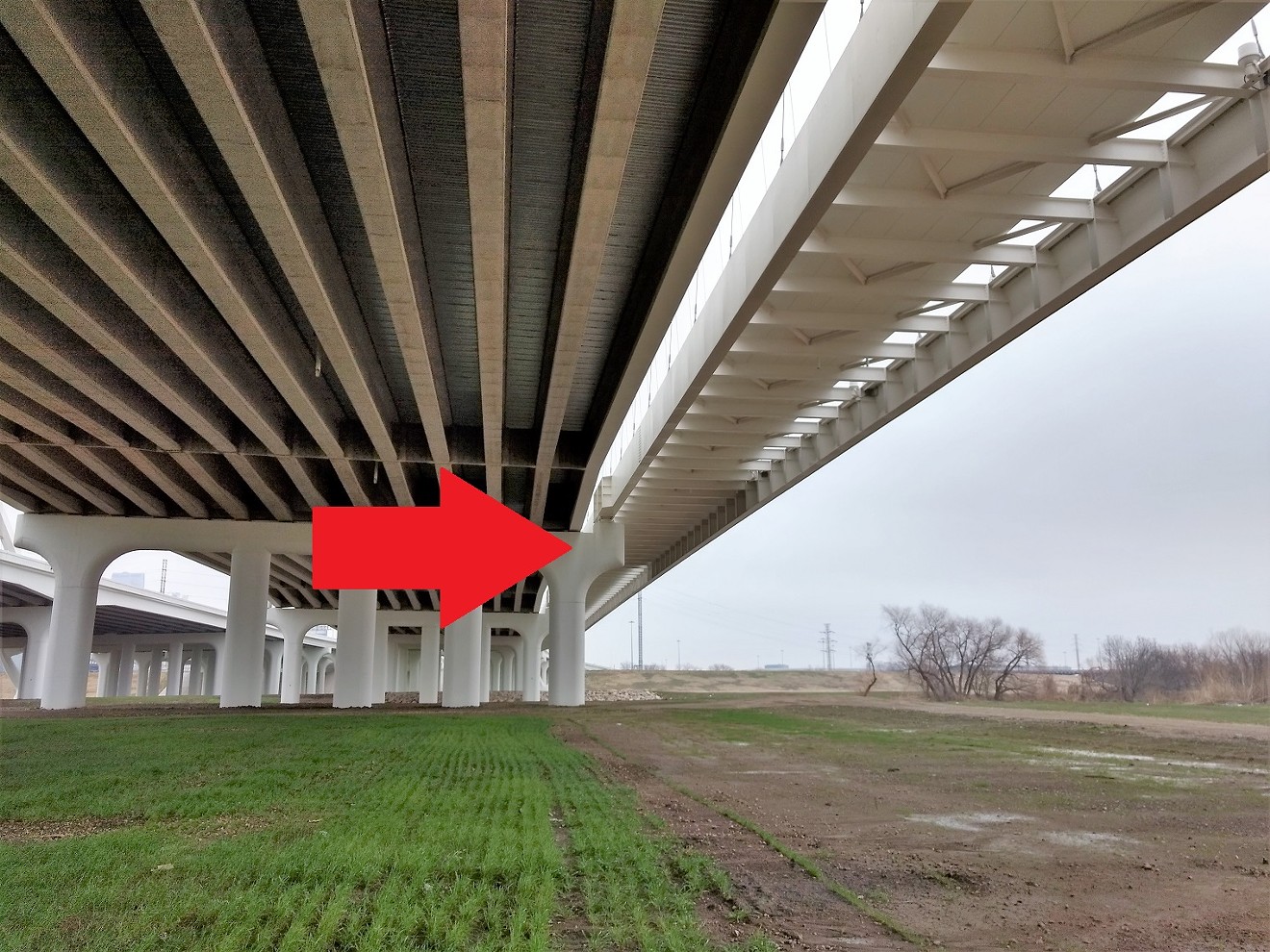 The arrow points to one of the places where the westbound pedestrian and bicycle deck of the Margaret McDermott Bridge rests on a supporting protrusion from the TxDOT concrete freeway deck bridge. Jim Schutze
One last thing about the controversial and beleaguered new Santiago Calatrava suspension bridge over the Trinity River downtown: To my untrained eye it’s not a suspension bridge.

I went down there over the weekend and got pictures. I don’t know what it is. Maybe the world’s most expensive garden ornament.

I say “last thing,” because I have been writing a lot of things lately — I worry too many — about the Margaret McDermott Bridge (MMB). City Council member Scott Griggs, in whose district it is, discovered why the city is almost eight months late in opening it. The city can’t open it, Griggs found, because the project engineer won’t certify that it’s structurally sound.

Let’s assume that at some point they’ll work that out. No, wait, tell you what. You assume it. After my picture-taking tour down there this weekend, I still have reservations.

Listen, if you just love the way the way two new arched Calatrava bridges look on the Trinity River downtown — and I don’t know why you wouldn’t — just slam the door on me right now. My feelings won’t be hurt, promise. I would never presume to question or even quibble with Calatrava’s soaring aesthetic achievement. I just have this one point to make.

Schematic showing pedestrian deck as a shelf or balcony hanging from the sides of the two concrete bridges.
American Bridge Co.
It is not exactly suspended, in the way one thinks of the Golden Gate Bridge as being suspended. In fact, even calling it a bridge is sort of stretching the point. And before we even get to that, may I share one more thing? I know I said last. This would be the second-to-last thing.

When we say Margaret McDermott Bridge, we really mean four separate structures. The Texas Department of Transportation built two freeway bridges, one eastbound, the other west, to carry the Interstate 30 across the Trinity River downtown. Then, at the specific request of Dallas and after much intense lobbying, TxDOT agreed to build two more structures designed by Spanish architect Calatrava.

Originally, a group of very wealthy and influential women including some generous patrons of the arts had hoped to see an entire succession of Calatrava suspension bridges up and down the river, which would have made Dallas the most Calatrava city on earth —  the Calatravaest. That idea was trimmed to three bridges, then two.

The second, the MMB, originally was to be a true suspension bridge. But that would have cost a ransom somewhere north of $300 million. Since no suspension bridges were actually needed to get across the Trinity and since Dallas already had one ornamental suspension bridge anyway in the Margaret Hunt Hill Bridge, the state and the feds balked at doing another. 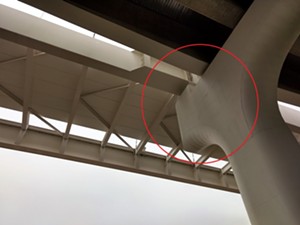 Detail of resting point on concrete bridge pier.
Jim Schutze
The MMB, designed as a cost-saving compromise, was always intended to be a regular, old, off-the-shelf, highway department, pier and beam, concrete, platform bridge with two big arches stuck on the sides to make it look like a suspension bridge from 10 miles away.

In public statements, the cost of the MMB has always been pegged at $115 million by officials who never fail to mention that $5.5 million of that money came from private sources. So that seems like a big savings — only $109.5 from the taxpayers compared with something like $300 million.

I cannot tell you that anyone has ever deliberately misled the public about this. I can tell you that the price — $115 million —  has always been tossed around pretty nonchalantly as the amount paid for the MMB.

But then we have a question, do we not? There are four structures down there that all fall under the name MMB. So which ones and how much of them did the $115 million pay for?

The answer is that the $115 million paid for the Calatrava arches only. The cost of the actual freeway bridges between the arches — the ones that carry 11 lanes of car and truck traffic across the river — is seldom if ever mentioned. The inside of the westbound walk and bike deck is supported at regular intervals by the concrete bridge deck, making it more like a balcony on the highway bridge rather than an independent suspension bridge.
Hannah Ridings
In fact I found that the cost of the freeway bridges, or, as I call them, the bridges, was buried deep in the overall multi-billion dollar cost of what the highway department calls the “Horseshoe Project,” which involves the rebuilding of all of the tangled expressways where they come together in downtown Dallas.

It took a while, but TxDOT was nice about finally digging up an estimate for me. The freeway bridges between the arches, a spokesperson told me, cost approximately $120 million.

Secondly — and, again, I’m not saying there was ever a deliberate deception — the savings doesn’t come out looking quite as slick when you realize the cost was $235 million total compared with $115 million. Given what we seem to be dealing with now in terms of structural issues, maybe we would have been smarter to push the extra money out there and build an actual suspension bridge instead of a wobbly Trumpoid trompe l’oeil.


Rather than being truly suspended from the arches, then, the pedestrian/bicycle decks are hung from the sides of the concrete freeway bridges like a very long balcony.

I use the term, wobbly, loosely of course, strictly as an unartful layman’s description, an expression of inexpert opinion and not as any assertion of a qualified engineering or technical assessment. But, you know, wobbly. They can’t open the thing because when they got done building it the cables holding it up started popping in the wind. To me, that’s wobbly. When I walked out there to look at it, every time the wind blew I started wishing I had a Mary Poppins umbrella.

When I have written about the MMB in the past, I have received two consistent objections to my calling it a garden ornament or a fake suspension bridge. The first is that the two arches have a functional purpose in that they carry — or will carry when they stop wobbling — two narrow pedestrian and bicycle decks across the river, one eastbound and the other westbound.

The original Mary Poppins movie poster.
Wikipedia
My objection there is that no sane city in the world would have spent $115 million to create dual pedestrian/bike decks — walkers and the bikes can’t just pass each other going in opposite directions on the same deck? — a short distance from an already available bike and walk bridge across the river.

At the downtown ends of the Calatrava decks, walkers and cyclists are disgorged into a jungle of crazy-lane traffic, red-neck liquor stores and bail bond agencies miles from where any non-drunk walker or cyclist would ever want to go. Just downriver at the Jefferson Bridge, the city’s other half-hearted afterthought attempt at bike lanes across the river does not work very well, either, but that bridge falls nowhere near the total and abject uselessness of the MMB for walkers and cyclists.

The MMB is absurd as a bike and walk bridge because the walk and bike lanes, supposedly suspended from the arches, were a phony justification for building the world’s biggest garden ornament, which brings us to the other thing. I can’t even figure out now where I stand on my promise about the last thing, but I’m almost done, anyway.

Last week at Councilman Griggs’s suggestion, I took a closer look at some schematics for the bridge, and it appeared to me that the pedestrian decks, rather than being suspended from the arches, were nailed to the sides of the concrete freeway bridges. So, over the weekend, I walked out there and took a closer look.

And I’ll be! In keeping with everything else about the MMB, they’re sort of half-suspended, which I think means hung, which is not the same as suspended.

The two pedestrian decks, one eastbound and one westbound so people won’t just walk into each other’s faces, are built on big I-beams. One I-beam runs along the inside of each deck and the other runs on the outboard side, with cross-pieces joining them, like a ladder laid flat across an open space.

I said at the top that you should assume the engineers will work out the wobbles. I mentioned that I was not quite able to make the same assumption myself, not just yet, and it’s for this reason: You mean to tell me, the damn things sit halfway on the concrete freeway bridges, and they’re still wobbly?

I am not an engineer. You know that. But just from working on my own house, I know a possible fix for this. It’s called scabbing. It’s when you nail one board flat-side against another.

We stop calling it a suspension bridge. We admit what it is — a Trumpian trompe l’oeil. We get the wobbles out of it by scabbing some steel onto those protrusions from the freeway bridges, with the new steel sticking out all the way under the bicycle and pedestrian decks to hold them up and get the wobbles out of them.

Then we turn over both decks, eastbound and westbound, to daredevils on motorcycles who want to go to the liquor stores. If you see some old dude out there riding on the back of somebody else’s motorcycle carrying a giant umbrella, that will be me, checking it out.