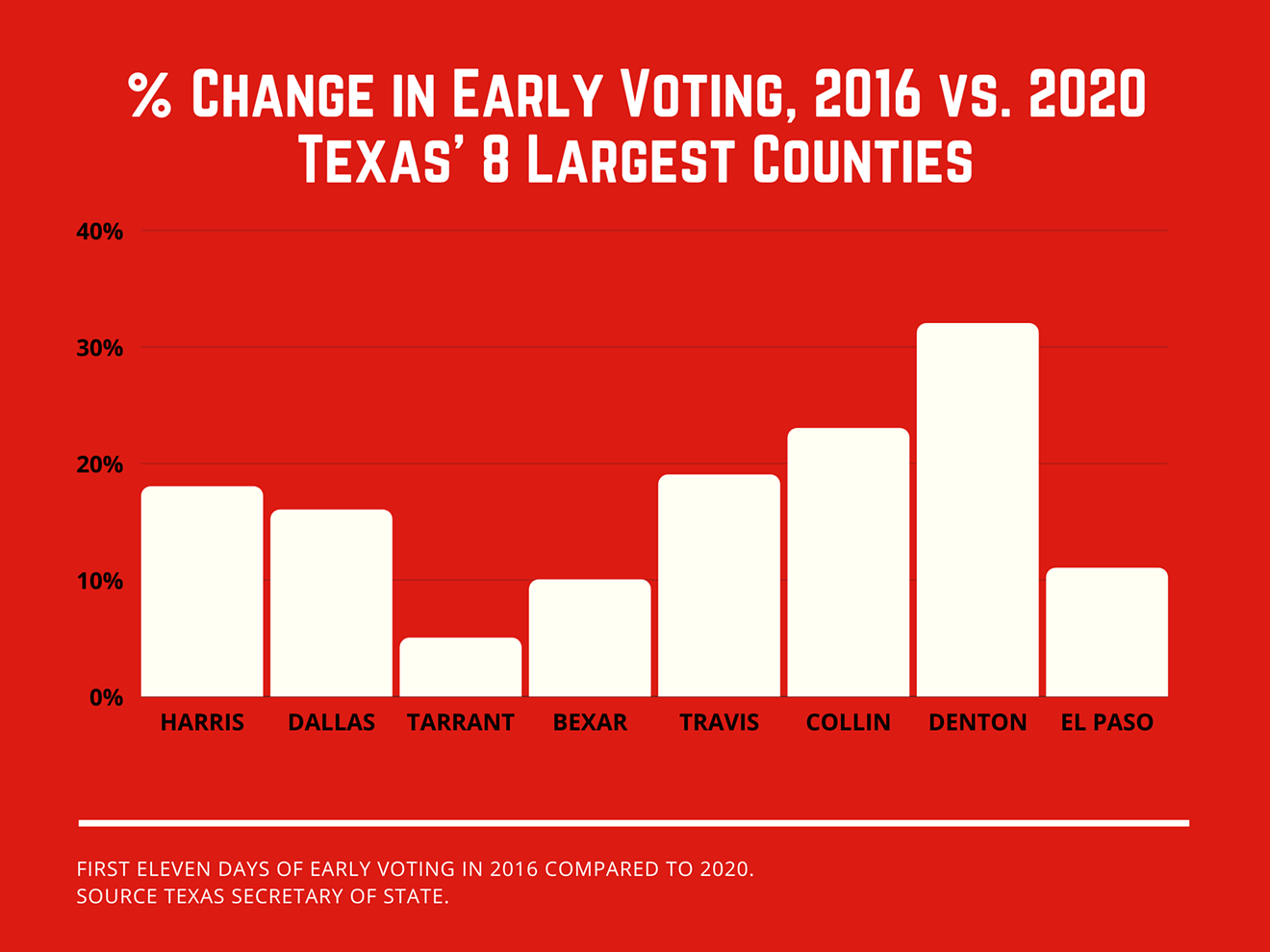 Either Denton County snoozed through 2016 election or is on a mission this time around. Or both. Probably both. Lauren Drewes Daniels
As the election heads down to the wire, perhaps you find yourself trolling Nate Silver, then quickly swearing off all social media, followed by immersing yourself in an episode of House Hunters International, which is honestly more of a scouting report, only to check Twitter once more after learning that dorm-sized loft in London is more than $1,500 a month. And that space shuttle-esque bathroom? Ew.

Either way, in just a handful of days, Election Day will be here. So, let’s moneyball our local counties.

Through the first 11 days of early voting this year compared with the previous presidential election, 16% more people have voted in Dallas County. That includes both in-person and mail-in ballots.

The line to vote outside the Oak Cliff sub courthouse.
Lauren Drewes Daniels


In 2016, Trump won Collin County by 17 percentage points, but two years later Democratic Senate candidate Beto O’Rourke narrowed that spread to just 6 points as he sought unsuccessfully to unseat Republican Ted Cruz. Since 2016, the number of registered voters in the county has increased 21%, a growth second only to Denton County's. Last week, Renuka Rayasam with Politico.com took a good look at Collin County, writing, “Over the past decade or so, new residents from across Texas, California and other states, drawn by jobs, good schools and low housing costs, have transformed this largely rural, reliably Republican district into a suburban, unpredictable one.”

In-person voting is up 27% this year and mail-in voting is up 128%. Denton County has already cast 68,700 more early votes than it did in early voting in 2016. Are these red or blue votes? We’ll just have to wait and see.

Tarrant County is historically Republican and there are no indications of that changing. It has seen the number of early votes cast rise only 5% over the same period in 2016, which is the lowest percentage increase in Texas's largest eight counties.

It’s worth mentioning that Hays County, southwest of Travis County (Austin), was the first county in the country to surpass their 2016 total voting number, including Election Day. As of Saturday, about 73,000 votes were counted compared with 72,164 in 2016. And like Denton and Collin, Hays is trending bluer, moving from a less than 1 point win for Clinton in 2016 to a 5 point win for Beto in 2018.

Early voting in Dallas County continues through Oct. 30, 7 a.m. to 7 p.m. each day. Poll workers and elections officials will take the weekend off and get ready for Election Day, Nov 3. There is no early voting the weekend before Nov. 3.

There are more than 350 places in Dallas County to vote on Election Day, and polls will be open from 7 a.m. to 7 p.m. Mail-in ballots can be dropped off at the Dallas County Elections office at 1520 Round Table Drive. Mailed ballots must be postmarked by 7 p.m. Nov. 3 to count.
KEEP THE DALLAS OBSERVER FREE... Since we started the Dallas Observer, it has been defined as the free, independent voice of Dallas, and we'd like to keep it that way. With local media under siege, it's more important than ever for us to rally support behind funding our local journalism. You can help by participating in our "I Support" program, allowing us to keep offering readers access to our incisive coverage of local news, food and culture with no paywalls.
Make a one-time donation today for as little as $1.