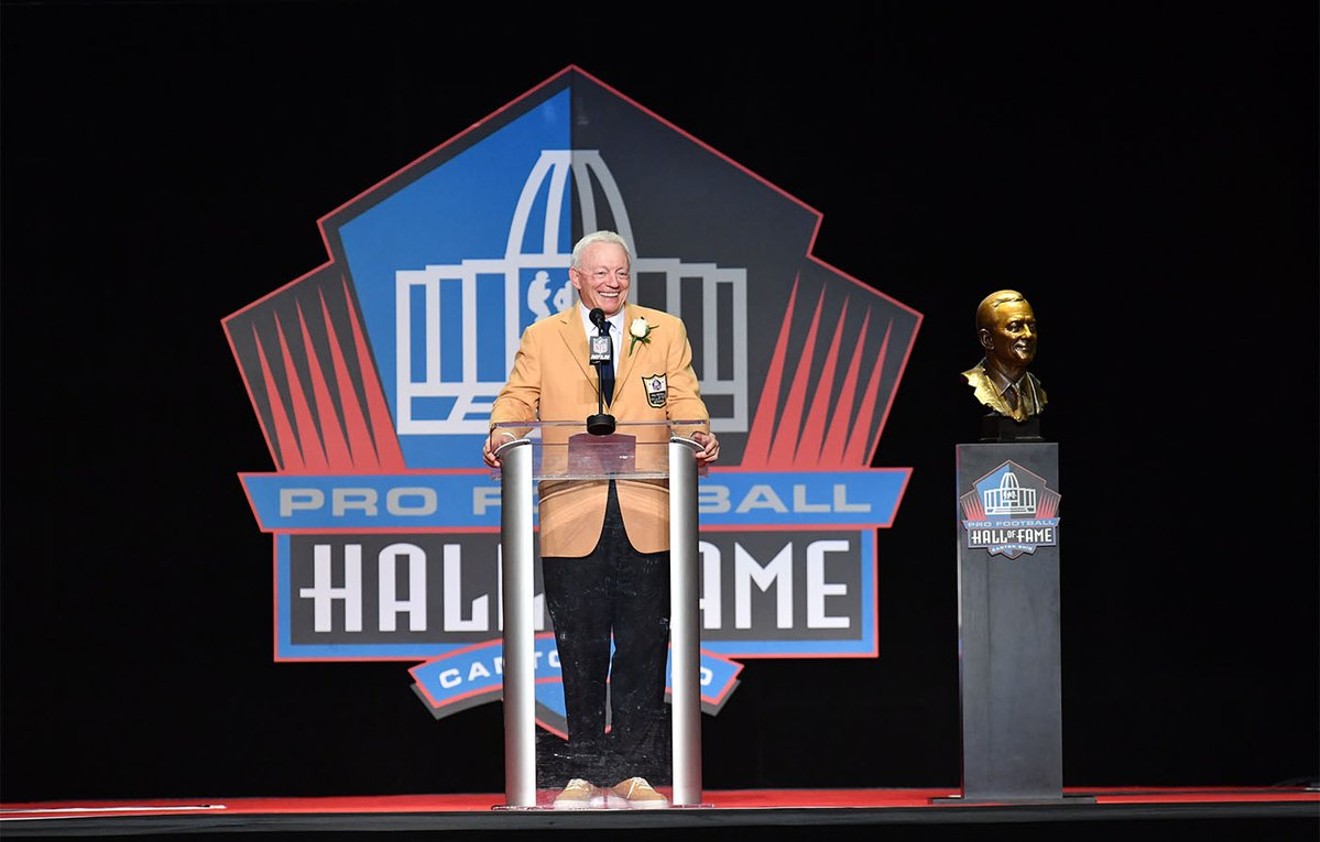 Jerry Jones delivered his Hall of Fame induction speech in July 2017. Pro Football Hall of Fame via Twitter
For the Dallas Cowboys, the NFL draft went a lot like the rest of their offseason. Cowboys owner Jerry Jones and the rest of the front office made eight picks on Friday and Saturday, buying a few lottery tickets, getting cute in spots and working around the edges of a roster Jones and company clearly believe is capable of getting the Cowboys to their first NFC Championship Game since the 1995 season.

If 2019 goes according to plan, this weekend's octet of new Cowboys won't start more than a handful of games for the team. They are a role players and development projects, drafted to fill niches rather than gaping holes. They'll have every chance to succeed in limited snaps and, if they fail on a large scale, something will have gone wrong way further up the chain.

Following a quiet Thursday night — the Cowboys didn't have a first-round pick thanks to their mid-2018 trade for wide receiver Amari Cooper — the Cowboys got on the board Friday, taking Central Florida defensive tackle Trysten Hill with the draft's 58th selection.
Hill is a like for like replacement for departing Cowboys defensive tackle David Irving. He has elite physical traits and can effectively rush the passer from the interior of the defensive line, making him a great fit for Cowboys defensive coordinator Rod Marinelli's 4-3 scheme. That's the good news. The bad news is that Hill, like Irving did in Dallas, struggled to conform to the expectations of his coaching staff at UCF, starting only one of 13 games for the Golden Knights in 2018 after starting 26 games combined in 2016 and 2017.

If the Cowboys can keep Hill's snap count down over the next year or two, using him in spots where he can wreak havoc with his size and speed but protecting him from the inevitable frustration of dealing with NFL offensive linemen, he could develop into Pro Bowl-type player, if not an All-Pro. If injuries force Hill to the top of Dallas' defensive line rotation next season, it won't be good for the team or his development.

The Cowboys' third-round pick, Penn State interior offensive lineman Connor McGovern, is a good player who Cowboys fans should hope doesn't play a snap for the team during the regular season. McGovern was the only player with a second-round grade remaining on the Cowboys' draft board when they went on the clock with the 90th pick. The team decided to go best-available and picked McGovern.
Stephen Jones said Friday that the Cowboys' decision to take McGovern had nothing to do with the future prospects of All-Pro center Travis Frederick, who missed all of 2018 as he recovered from the effects of Guillain-Barré syndrome, an autoimmune disorder. Jones could be telling the whole truth, but it's hard to blame the Cowboys for addressing a situation that left them scrambling for offensive line depth throughout last season.

If there's a player to dream on in this Cowboys draft class, it's Memphis running back Tony Pollard. After relying on poor-man's Ezekiel Elliott, Rod Smith, as Elliott's backup for the last two seasons, the Cowboys drafted Pollard, a scat-back capable of exposing linebackers on routes out of the backfield and lining up in the slot when called upon.
Pollard compared himself to the Saints' Alvin Kamara, perhaps the league's most dangerous offensive player at the NFL combine two seasons ago. While he's not to that level yet, Pollard clearly brings something to the Cowboys offense that it's missed over the last couple of years. Elliott being off the field won't necessarily be a bad thing for Cowboys fans in 2019.

Looking at the Cowboys' bottom-of-the-draft selections, the team's failure to take a safety until the sixth round jumps out. Heading into the draft, the back end of the secondary was the team's biggest perceived need, but Cowboys brass clearly has more faith in Xavier Woods, Jeff Heath and the team's other returning safeties than the general public.

"Well, we felt better than people from the outside looking in feel about our safety position," Stephen Jones said, according to The Dallas Morning News. "I've mentioned time and time again that we don't have as much resources allocated to that position, and it is probably not by accident. We certainly look at that, and if you can find a difference-maker, then you do it. I think we feel good about the group that we had coming in here, and then to be able to add a guy like (Donovan Wilson, the Texas A&M safety taken by the Cowboys with the 213th pick on Saturday) will make that position even more competitive. It will be great to see everybody compete."
KEEP THE DALLAS OBSERVER FREE... Since we started the Dallas Observer, it has been defined as the free, independent voice of Dallas, and we'd like to keep it that way. With local media under siege, it's more important than ever for us to rally support behind funding our local journalism. You can help by participating in our "I Support" program, allowing us to keep offering readers access to our incisive coverage of local news, food and culture with no paywalls.
Make a one-time donation today for as little as $1.