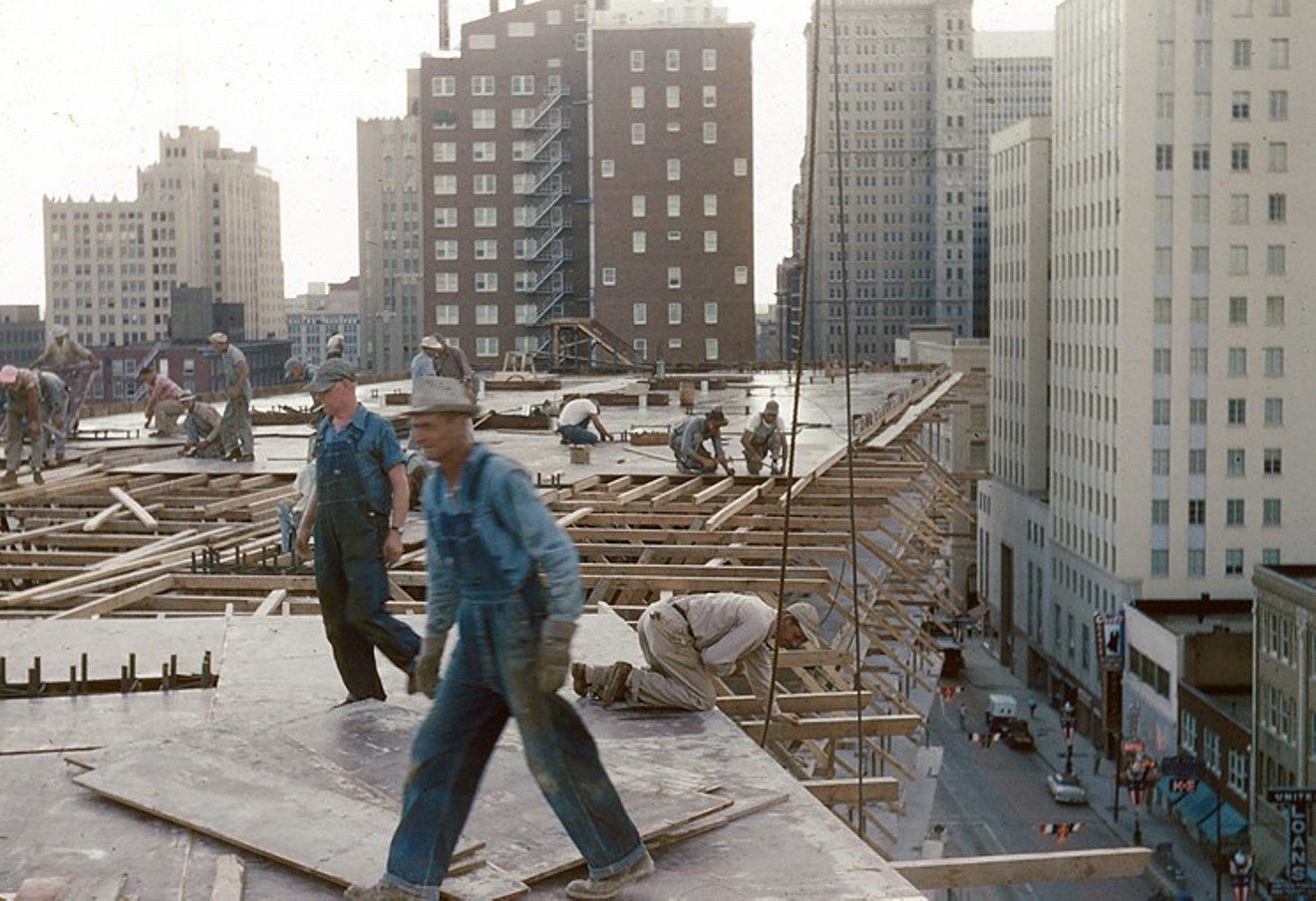 Statler-Hilton Hotel under construction in 1954-55. Tony Bennett sang at the opening. George Gimarc
Let me go back to an earlier point. I still say the money situation that the city is in right now makes absolutely no sense unless there is a monumental leak or a series of leaks somewhere. And I think the new city manager ought to go looking.

Things, after all, are urgent. The mayor has been down in Austin telling state officials that Dallas could be on the verge of bankruptcy, which is like telling a pack of hyenas you’re feeling sort of weak. The city can’t maintain its streets. The bond rating agencies keep downgrading us.

But here’s where you and I come in. We look around, and we see construction cranes all over town. We keep hearing about Dallas as a mecca for millennials, about job growth and other positive trends. What? Is all of that growth just an illusion?

I suggested three months ago that one place City Hall might want to check for leaks was in the area of so-called tax increment finance grants to developers — a complicated formula by which developers can get back tens of millions of dollars in taxes they owe to the city.

Since then I have been looking at yet another new wrinkle in City Hall tax giveaways, this time having to do with the $221 million redevelopment of the old Statler-Hilton downtown and the old Dallas Public Library, which is intended to become the new home of The Dallas Morning News.

In the Statler deal, I think Dallas is assisting in the creation of a whole new market, a new currency which may or may not turn out to work in our favor. What I can’t help wondering, with the wolf at the door, is why City Hall doesn’t think about going back to making money the old-fashioned way, by collecting the taxes due it?

The developer in the Statler-Hilton and library deal is Mehrdad Moayedi, the target of litigation in other unrelated matters and the recent subject of an Observer profile. Moayedi’s Centurion American Development Group has gone to a quasi-public entity in Wisconsin and persuaded it to sell tax-free bonds worth $26.5 million to be paid to Centurion. The bonds are to be paid off with money that has been promised to Centurion by a special Dallas tax increment finance district or TIF.

Centurion will pay the city taxes over time. The city will keep the new taxes based on the added value of Centurion’s project in an account. When Centurion has paid the city enough in new taxes, the city, through the tax district, will gift some of that money back to Centurion.

But Centurion’s Wisconsin play jumps that whole process up a notch. Instead of waiting to get its own tax money back in the future, the bond sale will deliver the cash to it right now.

Why do we have tax increment finance districts? They are used to create incentives to encourage redevelopment in areas where re-investment supposedly would not happen without the incentives. The big argument for TIFs downtown has been the cost of taking asbestos out of vacant towers and then reconfiguring them as modern residential and commercial spaces. City leaders figured the only way to get anything going there was to give the developers a head start and lay off some of the risk.

Get it? Sure you do. Let’s pretend it’s you. You’re thinking of building a new house. You plan on paying the city taxes on it, of course. But you haven’t quite made up your mind on the whole deal yet.

Now the Statler has a big beautiful green out the front door that wasn’t there when the hotel opened.
Justin Terveen
The city tells you that, if you’ll go ahead and build it, a few years from now after you have made your investment and built your house and after you have paid a certain amount of tax on your new house, they’ll give you some of that money back, because you’re cool.

I would say to you, “Yes, and it would be nice if we could all fly under our own power, too, would it not?”

But here is where it gets even more complicated. And please notice I said complicated, not squirrely, because I don’t know yet that it is squirrely.

An entity called the Downtown Dallas Development Authority has already sold $207 million worth of bonds in order to make advance TIF grants to Forest City, developer of the Mercantile Commerce Building. The Downtown Connection TIF — the same tax district backing the Statler/Library deal — is on the hook to pay off those bonds. It has promised to do so with the tax money paid into it by all of the projects included on its rolls. But paying off those bonds will soak up all of the money in the TIF for a long time.

So here comes Centurion, undertaking to rebuild the Statler and the old library, and of course they would like to get their own non-tax-payments paid back to them in advance, because that’s what Forest City got. But, alas, the well is dry.

So Centurion goes to the entity in Wisconsin and persuades it to sell bonds — borrow the money, in other words — promising to pay back the bond-holders with the money Centurion has been promised, more or less, from the TIF district.

And let me say something important right here: I have read through all of the statements and declarations, including the one saying the deal is being examined by the IRS. All of the risks and other pertinent factors are right there in black and white on the pages of those documents. That’s why I did not call it squirrely before.

Nobody is saying the Wisconsin bonds are somehow city of Dallas bonds backed by the full faith and credit of the city. They’re not. They’re a side deal, apart from the city, even though the city did have to give its permission for the sale.

They’re not rock-solid guaranteed by anybody. The declarations state plainly that the money to repay them has to come from the TIF district ultimately and that the TIF district is subject to certain vicissitudes, both political and market. People who buy the Wisconsin bonds have to assume that risk.

But look at it this way, as well. By giving its permission for its name to be attached to this deal, if not its faith and credit, the city has helped to create a whole new source of income, in effect, derived from tax money. It wasn’t sweet enough to come do your deal, pay your taxes and then get tens of millions of dollars of your tax payments handed back to you later. Now you can get the tax payments before you make them. Before you even develop.

And if Forest City could get that deal from the city and now Centurion can get it from some entity in Wisconsin, then why won’t everybody who does a development in Dallas want it from somebody? I want it. You should want it. If we don’t get it, somebody from Wisconsin will.

The other side of the case is this: The people at City Hall who administer the TIFs and the developers who get money from them will argue that TIFs are spurring a level of development to take place that would not occur absent these incentives. And they could be right.

The only numbers for measuring that, however, come from that part of the city staff that gets paid to run TIFs, and even their numbers seem pusillanimous. The current roster of TIFs will divert $1.15 billion from the city’s general fund — money that would have gone into city coffers but will go back to developers instead.

The city’s annual TIF report says the citywide tax base grew by 8.69 percent last year and the tax base within TIFs grew by 9.9 percent.

I’ve always had a queasy feeling about even those numbers, because the county appraisal district’s numbers show a citywide growth of over 10 percent last year, which would mean the TIF districts did slightly worse than the citywide tax base.

But, look, let’s split the difference and agree that no one has ever taken a hard objective arms-length look at his whole tax give-back concept. Does it really make money for the city? Or is it one of those big leaks that explain why a burgeoning city is on the verge of bankruptcy?

As I said, the IRS is looking at the Statler deal, but, according to the disclosures, the feds are looking at whether the proceeds of the bonds sales should be taxable as income, not at anything to do with the underlying legitimacy of the deal itself.

How about this as a homework assignment for our new city manager? He goes to an arms-length outside examiner with serious cred. He says, “Dallas is now enabling a kind of futures market in tax refunds. Is that a good idea?” I know I’d be on pins and needles waiting for that report.