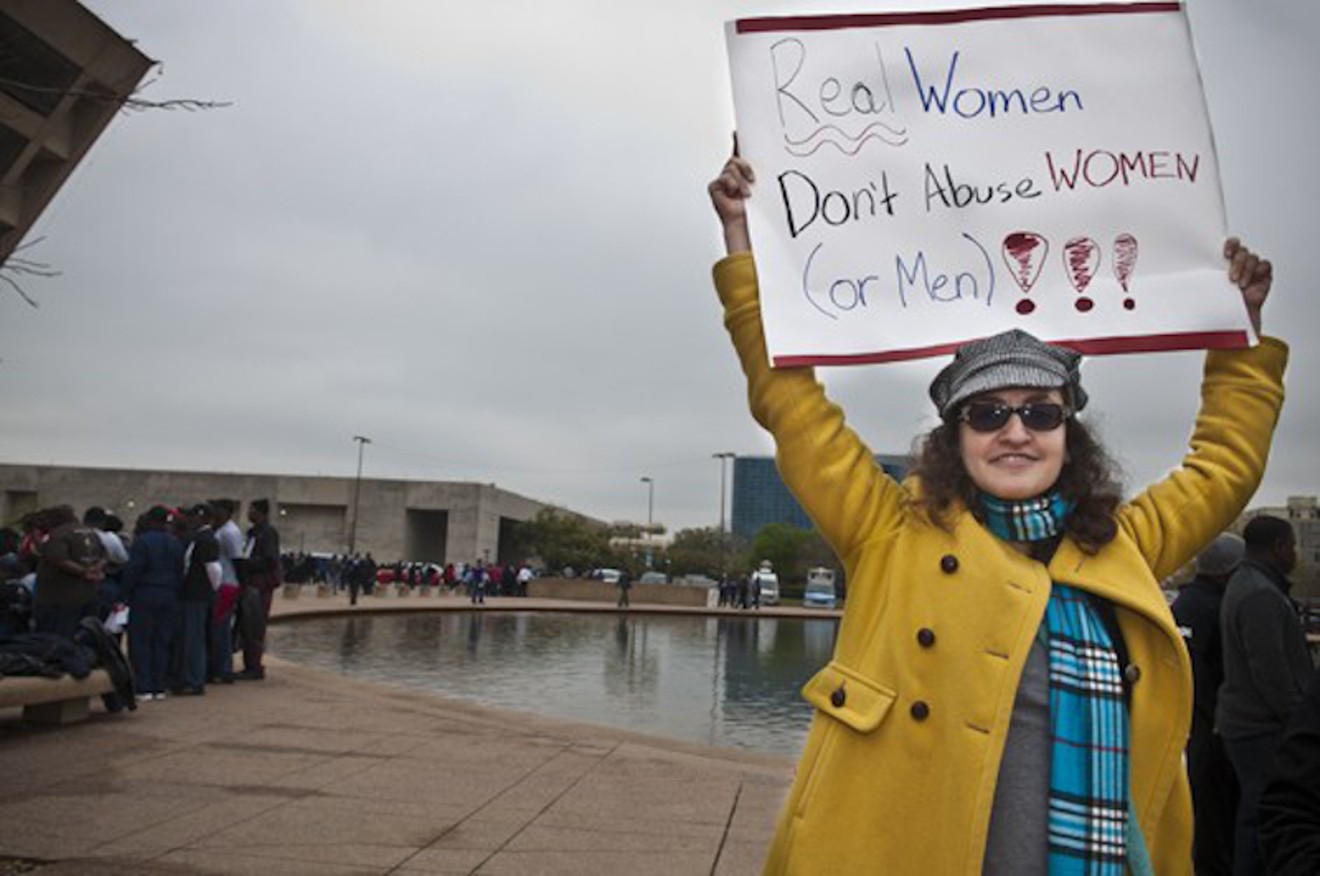 A demonstrator takes part in a rally in Dallas against domestic violence in 2013. Yeah, it's been that long. File photo
Dallas needs more shelter space for victims seeking refuge from domestic violence. Police need better training, schools should teach more about preventing abuse, and groups that serve victims need money to cover transportation expenses for their clients.

Those are some of the findings released Wednesday by a task force Mayor Eric Johnson asked in March to come up with a concrete plan to reduce the number of aggravated assaults in family violence cases by 25% over three years.

That's an ambitious goal in the best scenario, but the pandemic that's keeping victims at home with their abusers gives it urgency.

"Domestic violence is among the most significant and unique public safety challenges we face,” Johnson said in a statement. “The city, the county, our school districts, transportation entities, nonprofits and others can all play a part in the fight against the scourge of domestic violence."

The task force originally was formed in 1987 to collaborate with other agencies and private groups to confront domestic abuse. It also recommends that the Dallas Police Department hire a victim advocate to assist with outreach, community education and transportation to shelters.

The pandemic has exacerbated the city's troubles with family assaults. In August, DPD responded to 1,288 domestic violence-related offenses, according to the task force report.

As of late September, family violence aggravated assaults have increased by over 8% since last year, according to the report. The number of family homicides is 27 so far this year. While this is lower than last year's 31 family homicides, the task force said it's a worrying number.

A domestic violence homicide occurred as the task force was finishing its report.

In early September, a woman was killed by her estranged boyfriend, the report said. He had been arrested and accused of assault and aggravated assault against her. Less than three days after the boyfriend made bail — $35,000 for each charge — the woman was dead. Because the victim had not gone to the hospital after the initial assaults, she was not flagged to receive follow up visits, the report said.

The task force laid out recommendations aimed at decreasing severe injury or death.

These include tracking, studying and supporting survivors of near-lethal assaults; providing the lethality assessment profile of offenders to magistrate judges and probation officers; and reforming the bond process for offenders.

"These recommendations represent the collaborative efforts of people and organizations across our city that serve victims of domestic violence and try to keep our families safe," council member Jennifer Gates, chair of the task force, said in a statement. “... I know that working together, we can work to reduce domestic violence incidents, save lives, and ensure that justice is served."
KEEP THE DALLAS OBSERVER FREE... Since we started the Dallas Observer, it has been defined as the free, independent voice of Dallas, and we'd like to keep it that way. With local media under siege, it's more important than ever for us to rally support behind funding our local journalism. You can help by participating in our "I Support" program, allowing us to keep offering readers access to our incisive coverage of local news, food and culture with no paywalls.
Make a one-time donation today for as little as $1.