Understanding How a DFW Traffic Stop Ended In a Mexican Massacre 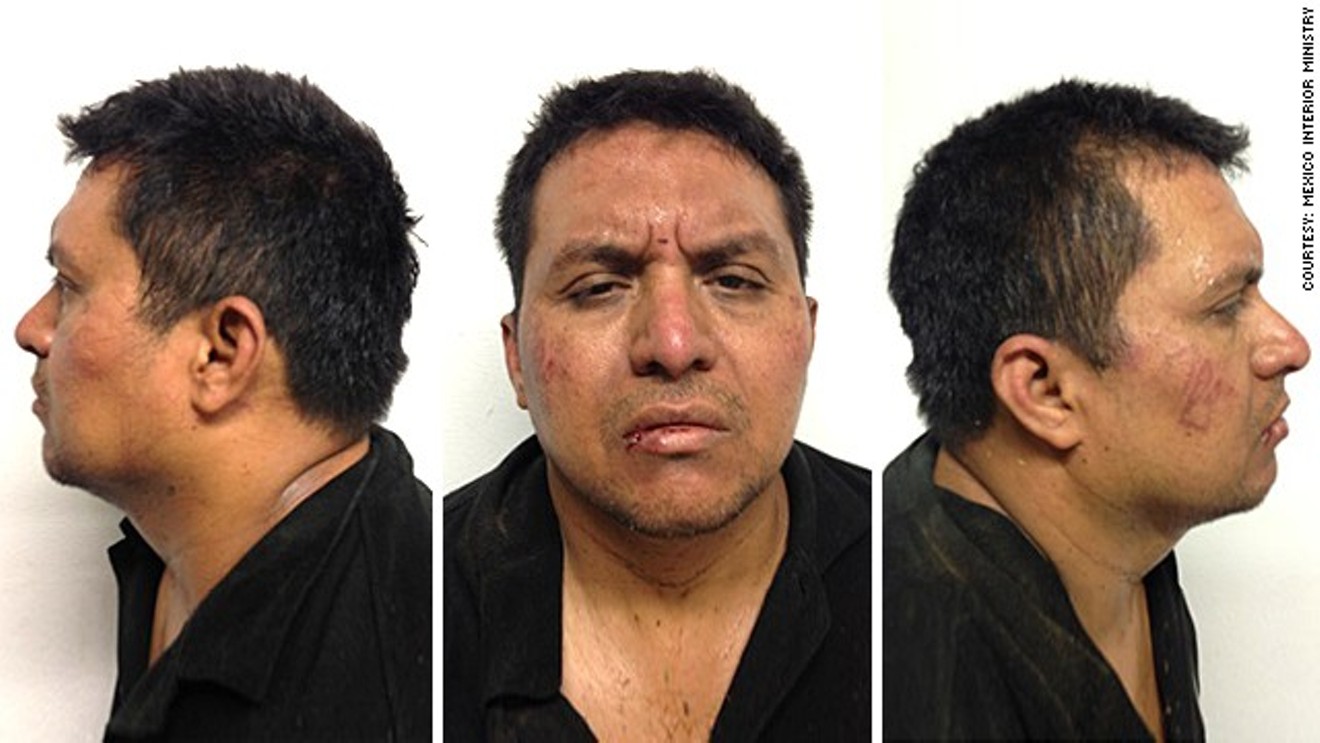 Miguel Treviño Mexico Ministry of the Interior
This week's National Geographic features a fascinating deep dive into the horrifying 2011 massacre in Allende, Mexico, a small town just across the U.S.-Mexican border. As the magazine painstakingly reports with help from ProPublica, the destruction of the town, carried out by a Zeta cartel bent on revenge, wouldn't have happened without a series of local events, beginning with a traffic stop near Dallas.

If you want to read a full account of the tragedy, you can check out the full story here, but the Observer's excerpted the Dallas-centric portions of the story, which are a tale unto themselves.

"The story begins with the U.S. Drug Enforcement Administration launching operation Too Legit To Quit, following several large busts, including the aforementioned traffic stop, which netted $802,000 and a tip about a high ranking Zeta.

"Several months earlier, in the Dallas suburbs, the DEA had launched Operation Too Legit to Quit after some surprising busts. In one, police had found $802,000, vacuum-packed and hidden in the gas tank of a pickup. The driver said he worked for a guy he knew only as 'El Diablo,' the Devil.

As they prepared to arrest him, Vasquez slipped across the border to Allende, where he sought protection from members of the cartel’s inner circle.

"But Martinez and Gonzalez saw an opportunity in his escape. If they could persuade Vasquez to cooperate, it would give them rare access to the senior ranks of the notoriously impenetrable cartel and a chance to capture its leaders, particularly the Treviño brothers, who had killed their way onto the list of the DEA’s top targets. Miguel Ángel Treviño was known as Z-40, Omar as Z-42."

Eventually, Martinez and the DEA successfully turned Vasquez, leveraging his wife and mother, both of whom still lived in the Dallas area, in order to get him to agree to turn over the PINs attached to the Treviños’ BlackBerry phones.

To get the PINs, Vasquez leaned on Héctor Moreno, a Zeta lieutenant in Coahuila, Mexico, charged with buying the Treviños' new cellphones every few weeks. Moreno's brother Gilberto, as it turned out, was the guy stopped with all that cash in his gas tank.

"Facing 20 years in prison, Gilberto had confessed that he was working for the Zetas and that the cash belonged to the Treviño brothers.

"Vasquez arranged for his lawyer in Dallas to represent Gilberto and promised not to let anyone else in the cartel know about Gilberto’s incriminating statements. Moreno repaid the favor by agreeing to get Vasquez the numbers."

After some hesitation by Moreno, Vasquez eventually got the numbers and handed them over to the DEA. The DEA shared the numbers with a drug task force in Mexico, one that the agency had trained but had consistently passed information back to the cartels. The Treviños found out that their phones were compromised and went on the snitch hunt that destroyed Allende, burning homes, farms and businesses throughout the town.

The DEA captured the Treviños in 2013 and 2015, respectively, but the agency refuses to say what role, if any, the PINs played in those captures. It is more reticent, still, about the massacre.

"The DEA takes credit for the captures but won’t say what, if anything, it did to investigate how the information about the PIN numbers wound up in the hands of the Zetas. Terrance Cole, Martinez’s supervisor in Dallas, and Paul Knierim, then a DEA supervisor in Mexico City who served as a liaison with the DEA-trained Mexican federal police unit, declined to be interviewed.

"Knierim has since been promoted and is now the agency’s deputy chief of operations in Washington.

"But Martinez agreed to speak, briefly choking up when asked about his role in the massacre. Named agent of the year in 2011, he is now battling kidney cancer, and so far aggressive treatment has failed. Russ Baer, a DEA spokesman, twice flew from Washington, D.C., to Texas to monitor interviews with Martinez and another agent there. As Martinez spoke, Baer interrupted to stress that the top Zetas were in prison and the agency’s investigation was ultimately a success."

Martinez said that there wasn't anything else he could've done to prevent the Zetas getting information about the leak.

"I got the numbers. I passed them to our people. As far as that, I don’t have anything to do with anything else.

"We all knew the numbers were dangerous. If I just sat on a number — what am I going to do with them here in Dallas? The wiretap is not as easy as people say it is. I have to have probable cause.

"I can’t speak for the agency, other than I just know what I did. I did all I could do.

"I gave it a shot. That’s the way I felt. I did the best I could do that day. I had the opportunity to get the intelligence and pass it on. I got it. I can’t very well go into Mexico and try to handle it myself."