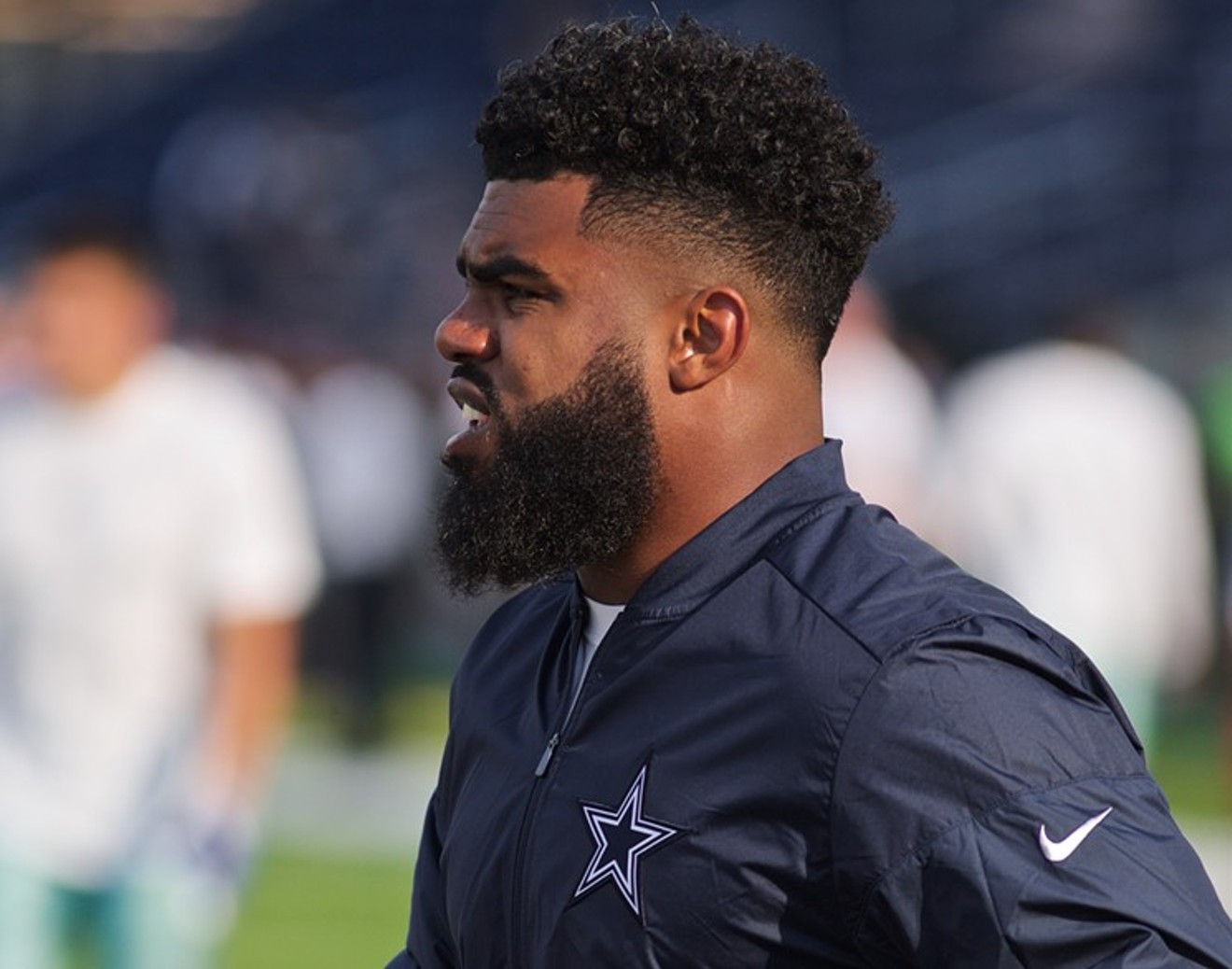 For a running back at the peak of his earning potential, Ezekiel Elliott already carries a lot of risk into the 2019 season. Now there are reports he may hold out. Scott Stuart/ZUMA Press/Newscom
With the Cowboys still two weeks or so from reporting to training camp and the blessed release that comes with the beginning of the regular season almost two months away, 2019's summer silly season is already in full swing. It's going to get worse before it gets better.

Monday, Pro Football Talk's Mike Florio reported that star running back Ezekiel Elliott is planning to skip camp if Jerry and Stephen Jones don't pony up and give him a new contract. Elliott's plan — hands up if you remember Emmitt Smith's 1993 holdout — would make for enough turmoil to fuel several late summers were it being hatched in a vacuum. It isn't, which means this year's preseason drama is going to be extra potent.

It's easy to understand where Elliott is coming from. Since being drafted fourth overall in 2016, he's been the most productive back in the NFL whenever he's been on the field. The Rams' Todd Gurley, at the time one of the few backs in Elliott's class, signed a $60 million extension last summer, between his third and fourth seasons. Elliott's teammates, quarterback Dak Prescott and wide receiver Amari Cooper, are both looking for market price or market-setting extensions this summer, too.

While Prescott's and Cooper's negotiations are essential pieces of the Cowboys' future, Elliott's potential holdout, and all the will-he-won't-they drama that's sure to come with it, is going to be a sideshow with its own satellite sideshows.

A couple of days before the Florio report, Kyle Johnson, the security guard involved in an altercation with Elliott outside of a Las Vegas music festival in May, reignited a seemingly dead controversy. After initially declining to press charges against Elliott, Johnson filed a complaint with the Las Vegas Police Department after the NFL declined to punish the running back.
“To not have anything happen to him, the NFL is basically saying it’s OK to go to Vegas, get obliterated and shove people over fences,” Johnson told Las Vegas TV station KVVU.

Even without the Las Vegas mess hanging around, the alleged assault on a DJ at Clutch in Uptown, the caught-on-camera exposure of his friend at Dallas' St. Patrick's Day Parade in 2017 or the 2016 domestic violence allegations that first brought him on NFL commissioner Roger Goodell's disciplinary radar, there are plenty of reasons to argue against his getting a big contract extension.

Here's a sampling of what you'll hear on a loop until a deal gets done or Elliott reports to training camp: Elliott plays the NFL position with the league's shortest shelf life. Gurley's extension already looks like a disaster thanks to his injury-riddled 2018, and the Cowboys' decision to let DeMarco Murray sign with the Eagles after an Elliott-like season in 2014 has proved an unqualified success. Unlike Prescott and Cooper, Elliott has two more years left on his rookie contract because of the fifth-year option the NFL builds into all deals for first-round picks.

A choirboy with Elliott's numbers might not be worth $50 million guaranteed, given the NFL's collective bargaining agreement. Whatever one thinks about Elliott's penchant for finding himself on the wrong side of the news, his inability to keep things quiet means that he's at risk of missing a big chunk of any season moving forward.

Fifty-four days until kickoff against the Giants. It's going to be a slog.
KEEP THE DALLAS OBSERVER FREE... Since we started the Dallas Observer, it has been defined as the free, independent voice of Dallas, and we'd like to keep it that way. With local media under siege, it's more important than ever for us to rally support behind funding our local journalism. You can help by participating in our "I Support" program, allowing us to keep offering readers access to our incisive coverage of local news, food and culture with no paywalls.
Make a one-time donation today for as little as $1.