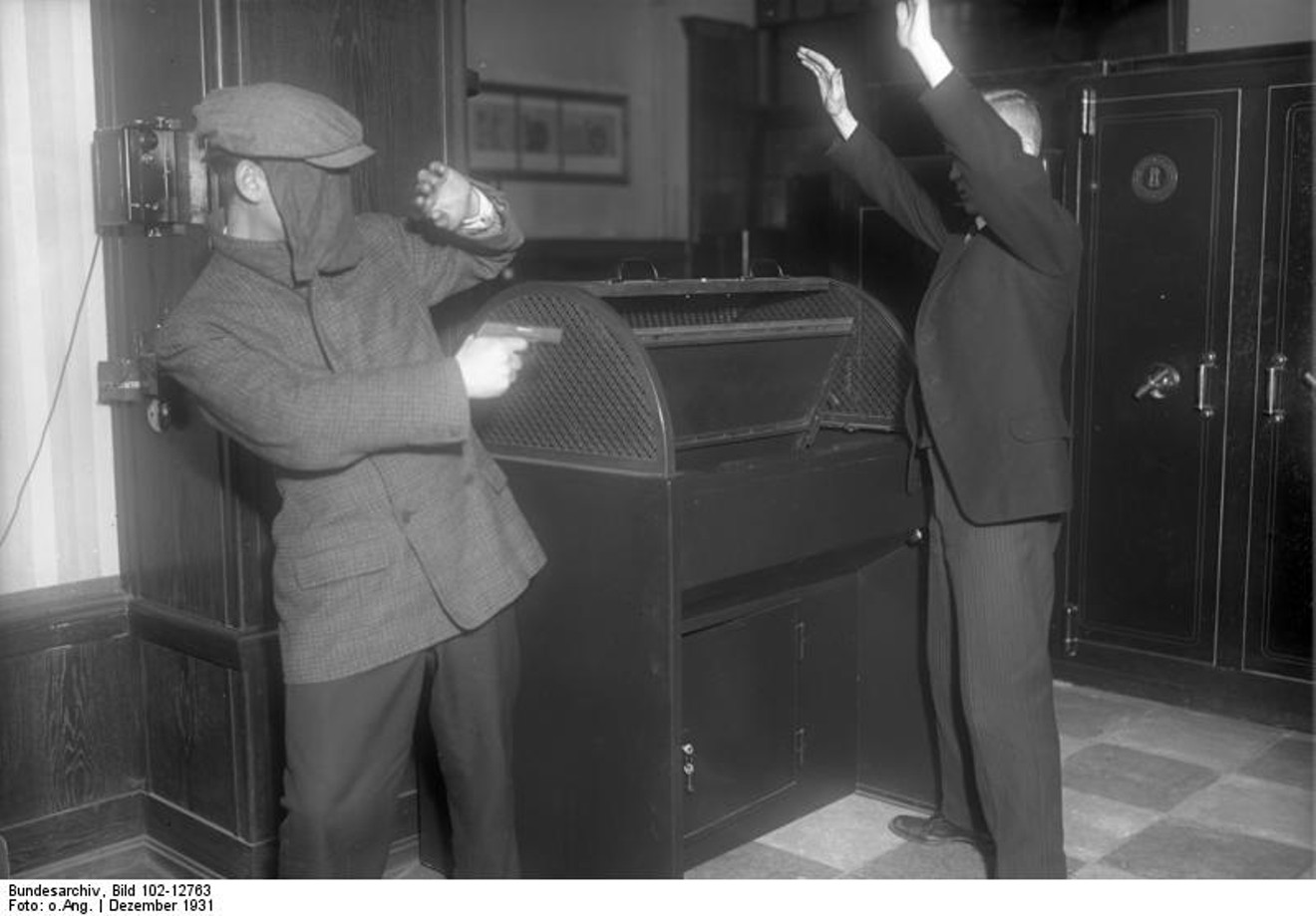 City of Dallas (left) explains the new DROP fund rules to police and fire pensioners (right). Wikipedia
U.S. District Judge David Godbey has ruled against Dallas firefighters and cops whose retirement savings were frozen by the Dallas Police and Fire Pension Fund board, saying that the retirees don’t have a case because they will get their savings back eventually.

I am trying to get my head around that. The parallel that keeps coming to mind is a guy who walks into a pawn shop with a gun and takes all the money. That’s as far as I’ve gotten.

I’m sure I’m not right because I’m sure that the city, acting through the pension board, would never walk into a pawn shop with a gun and take all the money. I hope.

You remember last year’s battle over the pension fund. For some set of reasons, the city’s pension fund for first responders devolved into a condition in which it no longer had enough money to meet its obligations to retirees. We could talk all day about why.


The parallel that keeps coming to mind is a guy who walks into a pawn shop with a gun and takes all the money. That’s as far as I’ve gotten.

Many people of good faith got together last year and hammered out a difficult deal by which the fund was placed on what everyone hopes will be a better path. The Godbey ruling really had nothing to do with any of that. It wasn’t about the pension fund, per se.

Godbey was ruling on a separate and distinct entity called the Deferred Retirement Option Plan. The DROP fund is a system of savings accounts into which pension payments — payments already earned and already paid out to the people receiving them — may be held.

Whenever this comes up, you will hear a lot of talk about how the people who have money in the DROP fund have already retired but they’re still working, but they still get pension payments anyway, so on and so forth. That talk almost always carries an insinuation that the people in question are some kind of double-dippers. That’s a deliberate distortion.

This one is easy to figure. You reach retirement age. Your boss doesn’t want you to retire. She says the business will be screwed if you retire. You tell her, “I have these monthly payments due me if I retire. If I keep working, I screw myself out of that money.”

She says, “Tell you what. You retire. You get your pension. But I hire you back. Your pension payments will go into an account. Then when you really do quit, the money will be there waiting for you.” That’s DROP.

Consider this. The city came up with DROP because it badly needed the continued services of its senior uniforms. And in a larger sense, the city has been able to maintain high recruiting standards for uniforms, in spite of having a relatively noncompetitive pay-scale, because the city offered generous retirement benefits. The city recruited on the back of the pension fund and DROP.

Another thought that I find haunting: What are these people doing when they continue to work into older age? They’re cops and firefighters. For how many years have how many gray-headed mothers out there counted the days until a son or daughter would no longer have to leave the house in a uniform every morning?

If I keep working into old age — well, I already have, obviously — I risk carpal tunnel syndrome. I have friends who have gone that route. As far as I can tell, carpal tunnel seems to be treatable with beer. I’ll take my chances. It’s not the same as sending people out into the streets to fight fires and crime.

So, wait. If the DROP fund is just a savings account, the money’s already in it. So what’s the problem? You put the money in. When you feel like it, you take the money out. Right?

Wrong. The DROP fund was captured by the pension fund because when things went south on the pension board, it started using DROP money to meet its pension obligations. It commingled the money. When the pension money ran low, the board reached over and made payments with the DROP money.

Last year at one point, the mayor of Dallas was making public statements to the effect that if the city wound up having to meet the pension fund’s obligations, the city might try to get out of it by declaring bankruptcy. So think about it. You’ve got all your money in one bank, and the president of the bank says he’s thinking about the B-word.

There was a point during last year’s controversy when DROP fund account holders began doing what I sure as hell would have done. They went downtown and said, “Just give me all my money right now.”

That was the moment when the anti-cop, anti-firefighter, anti-retiree rhetoric from City Hall really revved up, with all kinds of snide innuendo about double-dipping millionaire cops and firefighters selfishly threatening the city with financial ruin. And let’s take that one down to brass tacks. Dallas Police Association Vice President Mike Mata spoke to reporters during City Hall during last year's pension negotiations. The pension fund came out OK, but the DROP fund got robbed.
Jim Schutze
You sell your car to your brother-in-law. He can’t actually pay you for it today. But he says he needs it right away for work. You sign a contract with him by which he promises to pay you in full for the car one year from today.

Eventually he wrecks the car. But a year later, you need the money. You go to him. He complains to your sister and your mother that you are a selfish double-dipping shark threatening him with financial ruin over a nonexistent automobile. You know who your brother-in-law is? Your brother-in-law is Dallas City Hall.

You can’t sign the contract, take the car, drive the car, wreck the car and then say, “I think this is a bad contract.” Sure you do! Now shut up and pay the money you owe.

I can think of some immediate objections to that reasoning. The first would be that the pension fund should never have started commingling DROP fund money in the first place. The second would be that I don’t even understand why the problem should be resolved on the backs of people who didn’t cause the problem.

Using DROP money is not the only way to render the pension fund solvent. Other cities have used bond issues to bolster troubled pension funds. The cops and firefighters kept their half of the deal. They worked. It’s the city that allowed the fund to run into the ground. Why should the DROP fund depositors pay for the city’s sins?

But the last objection to the freeze on DROP fund withdrawals could be simply that it’s their money. It shouldn’t even be within anybody else’s power to freeze it. It’s definitely not anybody else’s business how and when they take their money out.

Judge Godbey ruled that there was no constitutional issue because the pensioners are not being permanently deprived of their property. They will get their property soon enough, he said. They just need to be patient.

This case will be appealed. Godbey’s decision fits into a certain pattern. Appointees to judgeships in the Northern District of Texas rise up out of regional politics. Even from the awesome altitude of the federal bench, they still typically feel a gravitational tug when the local establishment comes before them. It’s hard to imagine a case like this ever getting resolved except on appeal.

That’s for lawyers. This is what you and I need to think about. Imagine we own a pawn shop. A guy comes in with a gun and cleans out the cash drawer and a couple of firearm and jewelry cabinets. He gets away with a very big haul. He says, “I’m really sorry. I have a drug problem. I will pay you back some day, I promise.”

Only way to save the business is to clean out our savings account. We go the bank to get our money. The banker says, “I’m really sorry. I made some bad investments. I can’t let you have your money. But I’ll give it you eventually, I promise.”

So now we’re back home. No money. How much difference do we see between these two guys? I mean, at least the first guy had the excuse of being a dope-head.