In early September, the FBI learned of Copelin’s threats, which he made under the username “Alpha Top Dog Pure Blood” in posts on the right-wing social media outlet Gab. Now, federal authorities have charged the 40-year-old Amarillo resident with making interstate threatening communications and threatening a federal officer.

Copelin made his initial appearance in court Monday before U.S. Magistrate Judge Lee Ann Reno. If convicted, he could face up to 15 years in prison, the U.S. Department of Justice in North Texas said in a press release this week.

A public defender listed as Copelin’s attorney couldn’t be reached for comment. 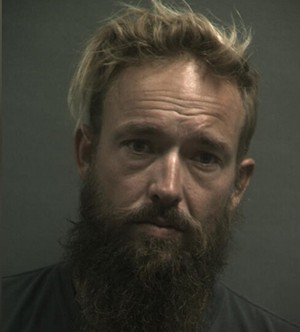 As Texas Republicans and right-wing politicians nationwide escalate anti-migrant rhetoric and call for the FBI to be abolished, Copelin is one of the latest to end up in handcuffs over allegedly threatening migrants and federal officers, among others.

In a Gab post on Sept. 8, Copelin vowed to travel to the U.S.-Mexico border and “start shooting invaders with joy and honor,” an FBI agent said in an affidavit filed in court.

In the same post, he said he’d shoot and kill federal agents, promising to “blow these FEDS away” because they “are letting [migrants] in here with the Jews at the State Department,” echoing the white nationalist conspiracy theory that Jews are behind migration as a supposed plot to undermine the country’s racial makeup.

A week later, he posted on Gab a call for “all strong able-bodied White alpha men” to obtain sniper rifles and “get to the border now and drop these fools.”

In yet another post, he reportedly threatened to hang a man who had a Mexican flag on his car.

On Sept. 25, he said he’d kill anyone with a Beto O’Rourke sticker or yard sign, adding: “I’ll hang you on a light pole at dusk.”

In late August, Copelin allegedly wrote, “I love killin’ n******, especially the young ones in their 20s fucking my white women and beating on ‘em.” Around that time, he also said he was “gonna kill these bitches and blow their asses up,” referring to Internal Revenue Services agents.

In several posts, Copelin included images of guns and knives, according to court records.

His arrest comes amid a sharp spike in GOP rhetoric dubbing the humanitarian crisis on the U.S.-Mexico border an “invasion,” language that also appeared in the manifesto published by the white nationalist shooter who killed 23 people in an El Paso Walmart in August 2019.

It also comes as Republicans in Texas and beyond continue to call for the FBI to be abolished in the wake of the search by agents at former President Donald Trump’s Mar-a-Lago home.

In a July interview on Fox News, Texas Gov. Greg Abbott told host Maria Bartiromo that "we do have an invasion driven by the cartels coming across our border that are pouring people into our country at unprecedented levels.”

Last week, two men, including a detention center warden in West Texas’ Hudspeth County, were arrested after allegedly opening fire on migrants in a drive-by shooting. The shooting killed one of the migrants, while another was hospitalized.

After that incident, the Texas Democratic Party issued a statement accusing Republicans of tilling the soil for violence and hate crimes.

Hinojosa said that “when you continuously use language like ‘invasion’ to describe what is happening at our border, the only logical conclusion is that you want migrants and asylum-seekers to be treated like ‘invaders.’”

He added, "We saw this in El Paso, when a racist monster drove hundreds of miles just to slaughter innocent shoppers at a Wal-Mart, ginned up by the bigoted language that Texas Republicans use to rally their base."

Speaking to the Observer, Efrén Olivares, the deputy legal director for the Southern Poverty Law Center’s (SPLC) Immigrant Justice Project, explained that anti-migrant rhetoric is "spilling over and absolutely contributing to people resorting to violence."

Freddy Cruz, a research analyst for the SPLC’s Intelligence Project, said, "Now, as we get closer to the elections, a lot of the rhetoric is really fueling a lot of activity by extremists."

In a recent Fox News interview, Jackson suggested that the FBI had planted evidence to frame Trump when it served a search warrant on the former president's residence. “No one trusts the FBI or the DOJ anymore,” he said.

For his part, Cruz recently told the ultra-conservative outlet Newsmax that the “political DOJ” was acting as a “partisan weapon” under President Joe Biden. "He treats it like the storm troopers for the Democratic National Committee."