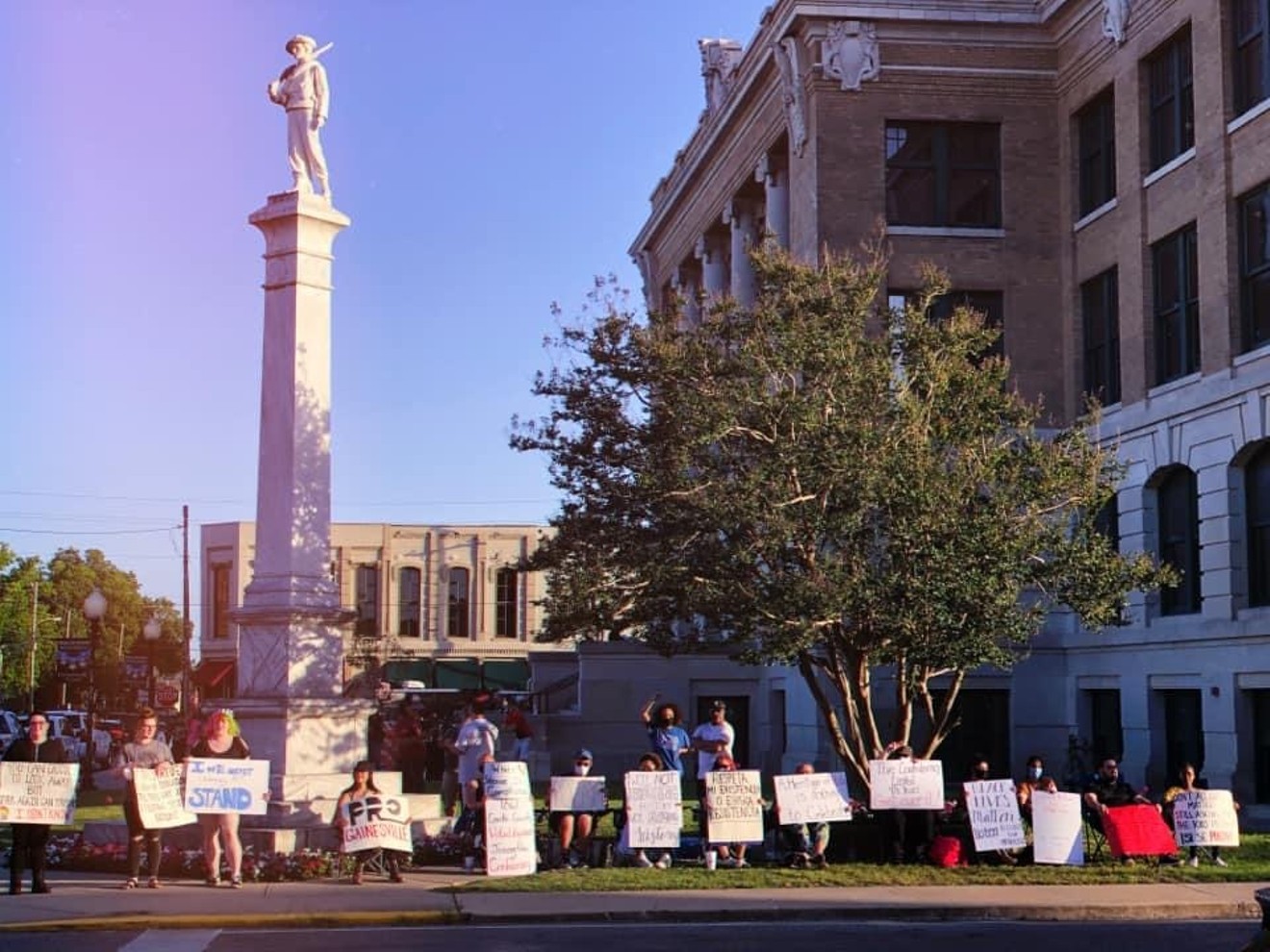 Over the past few weeks, PRO Gainesville, a local grassroots organization, has protested for the removal of the town’s two Confederate statues.

Founder Torrey Henderson said she was pleasantly surprised by the council’s unanimous verdict.

“I didn’t expect that, so that felt amazing,” she said. “It made me teary at the end, because I didn’t think that this community would at all get there.”

Gainesville is the latest Texas town to eliminate a Confederate memorial following the recent wave of Black Lives Matter protests; Dallas, Fort Worth and Denton each removed statues in June. Still, Gainesville activists say there’s more work to do: It’s one monument down, one more to go.

The statue in Leonard Park stands at the entrance of a 30-acre recreation area that includes a playground, stage, swimming pool and zoo. The city’s website also lists “monuments and points of interests” as park attractions, but it fails to mention the Confederate statue, specifically.

During last Tuesday’s special called meeting, Mayor Jim Goldsworthy set the tone for City Council’s vote. In his opening remarks, Goldsworthy asked that his constituents think of how the statue’s racist connotations could make others feel.

“If there’s one kid that plays in that playground that we built as a community that reads that, and sees that it says that the Confederates are our heroes, that’s a hard stop for me,” he said during the meeting.

The Leonard Park statue was erected in 1908 by the United Daughters of the Confederacy, a heritage organization of white women with ties to Confederate soldiers. That group was responsible for donating hundreds of statues across the South at the height of the Jim Crow era, according to political analysis website FiveThirtyEight. 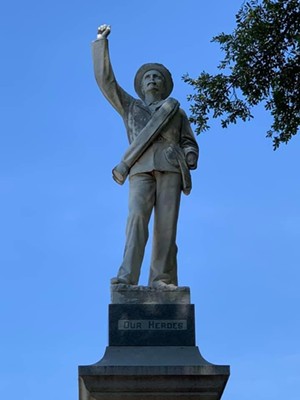 Leonard Park's monument remembers Confederate soldiers as "our heroes."
Justin Thompson
Gainesville City Council passed a resolution that would return the statue to the United Daughters of the Confederacy. A UDC representative, Dorothy Norred, acknowledged that the statue may be offensive to some during the meeting.

Another Confederate monument stands on the town’s courthouse lawn, but its future remains unclear. The Cooke County Commissioners would be responsible for deciding its fate, but they have not yet added it onto an agenda for discussion or a vote.

County Judge Jason Brinkley did not respond to a request for comment. During an interview earlier this month, though, Brinkley said the commissioners would consider the community’s comments.

Although he’s relieved about the council’s decision, PRO Gainesville co-founder Justin Thompson said the courthouse monument is even more problematic than its counterpart.

An inscription on the courthouse statue’s base reads:

“No nation rose so white and fair,
None fell so pure of crime.”

Thompson said the stanza allows hatred to remain in Gainesville. Not only that, but the statue itself is far from unique, he said; there’s another Confederate memorial with that same verse in Augusta, Georgia.

On Saturday, PRO Gainesville will hold another demonstration calling for the removal of the courthouse’s statue, Henderson said.

“It still doesn’t represent our community; it still allows for a division,” she said. “They’re allowing division to maintain in this community, and that’s what’s keeping me out here.”

PRO Gainesville is also calling for Gainesville ISD to rebrand a school named after Confederate Gen. Robert E. Lee. The district’s board of trustees discussed changing the name in a June meeting, according to FOX News affiliate KXII.

Gainesville’s Superintendent DesMontes Stewart could not be reached for comment.

Regardless, Gainesville’s school board should choose something that doesn’t alienate any of the town’s children, Thompson said.

“People want to call us snowflakes or whatever, but honestly, we’re just trying to make this city more inclusive to everybody,” he said. “We just want equality and for everybody to feel comfortable where they’re at.”
KEEP THE DALLAS OBSERVER FREE... Since we started the Dallas Observer, it has been defined as the free, independent voice of Dallas, and we'd like to keep it that way. With local media under siege, it's more important than ever for us to rally support behind funding our local journalism. You can help by participating in our "I Support" program, allowing us to keep offering readers access to our incisive coverage of local news, food and culture with no paywalls.
Make a one-time donation today for as little as $1.