Raise your hand if you fell for it. Gage Skidmore
Turns out Texas Gov. Greg Abbott was right to think something fishy was going on three springs ago when the federal government announced a series of U.S. military training exercises known as Jade Helm 2015. He just could not have been more wrong about what it was.

Speaking on MSNBC's Morning Joe, former National Security Agency and CIA Director Michael Hayden said the hysteria that developed about the exercises was the result of an early Russian attempt to spread misinformation in the United States via social media and other channels.

"There was an exercise in Texas called Jade Helm 15 that Russian bots and the American alt-right media convinced most — many — Texans was an Obama plan to round up political dissidents," Hayden said. "It got so much traction that the governor of Texas had to call out the National Guard to observe the federal exercise to keep the population calm."

As word about the exercise spread in April 2015, there were rumors of camps being set up at Walmarts in rural Texas and massive containers being shipped into the state to handle all the guns that were about to be confiscated.

Although it was abundantly obvious that none of that was true, Abbott, spurred on by the likes of Alex Jones and other conspiracy-focused outlets such as World Net Daily, called on the Texas State Guard — not the National Guard — to monitor the exercises.


“At that point, I think they made the decision, ‘We’re going to play in the electoral process.’” — Michael Hayden

"By monitoring the Operation on a continual basis, the State Guard will facilitate communications between my office and the commanders of the Operation to ensure that adequate measures are in place to protect Texans," Abbott wrote in a letter to Texas Guard Cmdr. Jake Beatty.

Abbott's decision may have spurred the Russians to attempt to influence the 2016 U.S. election, Hayden said.

“At that point, I’m figuring the Russians are saying, ‘We can go big time,’” he said. “At that point, I think they made the decision, ‘We’re going to play in the electoral process.’” 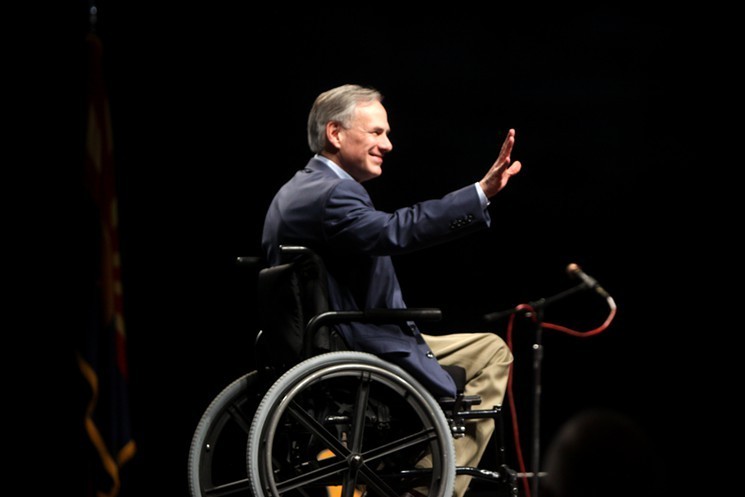 Raise your hand if you fell for it.
Gage Skidmore
Abbott's office did not return a request to comment on Hayden's statements, but Texas Democrats pounced on the opportunity to lampoon the governor.

“Republican Gov. Greg Abbott was a Russian pawn and a useful idiot for Russian efforts to instill fear and distrust in our American institutions. Gullible Texas Republicans turned against the United States," Texas Democratic Party Deputy Executive Director Manny Garcia said Thursday. "Abbott still owes the men and women of our armed forces, and every single Texan, an apology."

“Gov. Greg Abbott was duped by Russian bots. He indulged in awful conspiracy theories against our own men and women in uniform," Valdez said. "He was a puppet in a Russian infowar that sowed distrust amongst Americans and paved the way for foreign intervention in our elections. This is who is lecturing us on being smart on security and integrity in our electoral process?"

Andrew White, Valdez's Democratic runoff opponent, made light of the situation on Twitter.