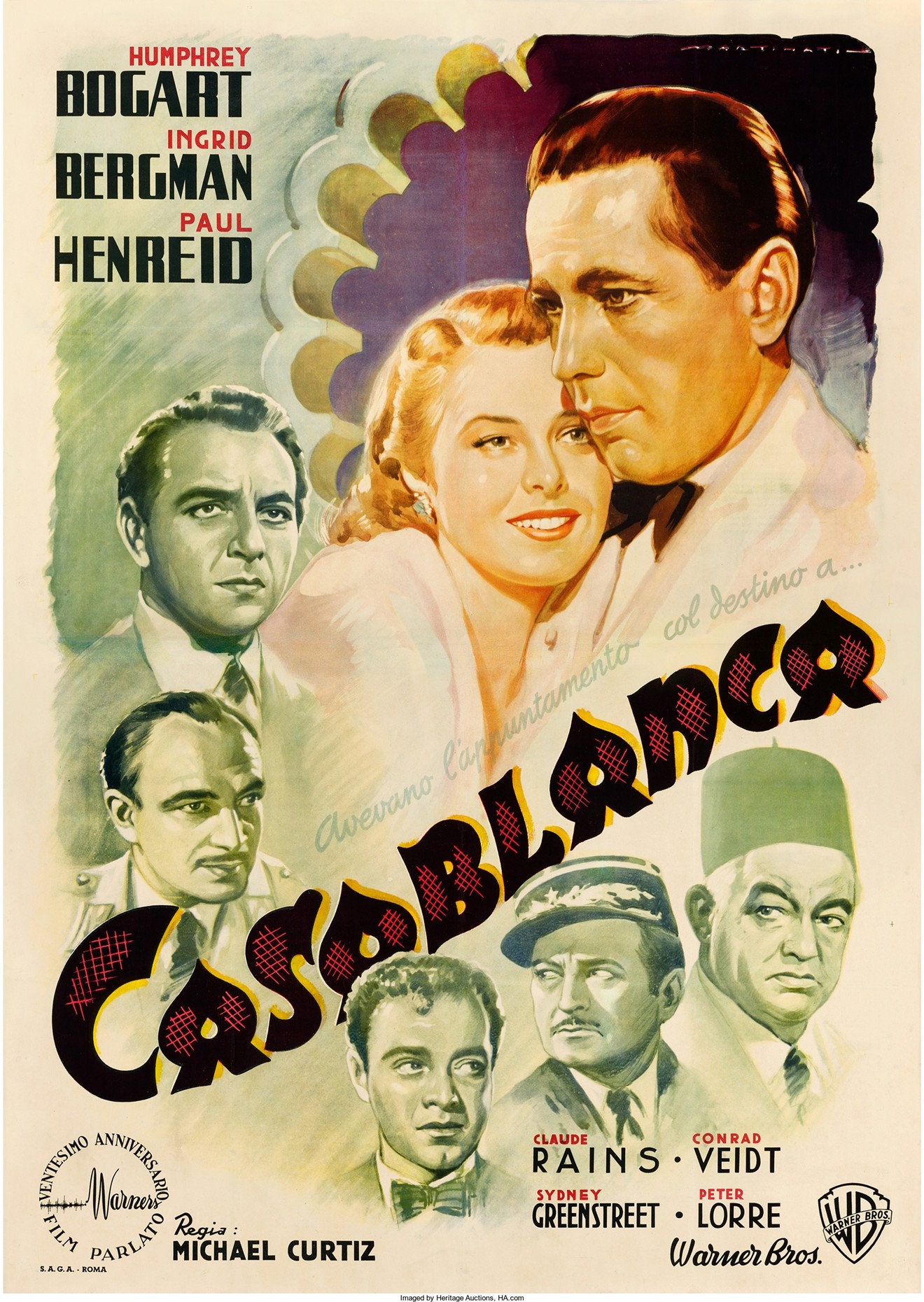 Bidders at an auction in Dallas this weekend matched a world record for the highest amount ever paid for a vintage movie poster: $478,000 for a 1946 Italian piece touting the classic film Casablanca. Several bidders vied for the 55.5-by-78.25 inch piece of history.

Grey Smith, the director of vintage posters at Heritage Auctions, arranged the sale after successfully convincing its owner to attempt it. He calls the poster "a masterpiece" of the movie poster world. But what exactly makes one of these worth a half-million dollars?

The auction house says it's moved previous Italian posters for the film for as much as $203,000, but this sale eclipses expectations. "I knew it was special, but even I didn't know this would happen," Smith says. "That's why this business is exciting. You do your best to promote, then cross your fingers and wait."

This Casablanca poster is an epic find in the vintage poster world, and certainly nothing like it has emerged on the market in a while. Smith saw it had all the elements of a big sale: a well-known artist, an iconic movie and a compelling backstory. Marketing it that way would be a sure way to attract buyers. And the bids rolled in.
"Collectors have often been interested in posters from the countries of origin," Smith says. "Posters of Italian films from Italy. But collectors are growing interested in these brilliant pieces of art from foreign films, American films in Italy or Japanese films in Italy."

"Collectors for this title are avid. There were more than a couple that made a play for it." – Grey Smith, director of vintage posters at Heritage Auctions

Smith says the poster is a rare survivor from postwar Europe. War-torn Italy was barely getting on its feet when Casablanca played in 1946. Italian dictator Benito Mussolini was captured and killed in April 1945, and major fighting ended that spring. The Germans and Allies had fought through the country, leaving a wake of destruction and deprivation. And paper was high on the list of things in short supply.
The book Mass Culture and Italian Society from Fascism to the Cold War lays our what happened to paper in Italy. The Fascist government controlled the supply, of course, and made a big show of the nation being self-sufficient in paper manufacturing. The country could make the paper on its own, but it still relied on imported raw materials. When World War II cut off the supply of wood pulp and cellulose, "a severe paper shortage resulted."
With paper in short supply for everyday Italians, movie posters were good targets for reuse. Paper drives during and after the war cleared out theaters of old posters. "There's a good chance some of these posters were used as butcher's paper," Smith says.

Doomed lovers caught up in global events: something many people could relate to in 1946 across the war-torn world.
Wkicommons
The artist, Luigi Martinati, is among a small class of golden-era Italian movie poster masters. A handful operated from 1914 to 1950s, when offset printing virtually ended artists' production of large posters. Another auction house that vends posters, Aste Bolaffi, gives some background on this marketing expert turned artist. "The poster that made Italy’s participation in WWII official [L’Italia spezza le catene che la soffocano nel suo mare, i.e. “Italy Breaks the Chains Stifling It In Its Sea,” June 1940], bears his signature," professor Armando Giuffrida reports on the company website.

Martinati's very successful career also comes off as opportunistic, almost cynical. "From 1939 to 1940, when the [Mussolini] regime restricted American film imports, he switched patrons and began working for Artisti Associati, ICI, Sangraf, Tirrenia, GeneralCine, Minerva, FilmUnion (UFA), and ACI/Europa," Giuffrida writes. "To compensate, immediately after the war he illustrated posters for Russian movies distributed by GDB, such as Ivan the Terrible and Peter the Great." He finished his career working for Hollywood studios like Warner Bros. He retired in 1958 and tore up all his sketches on the way out the door.

This Casablanca poster is considered one of Martinati's most gorgeous and is considered unique for showing more of the cast. And unique means collectors notice. "Most of the movie posters only show Bogart and Bergman," Smith says. "That elevates this."
The secret weapon to make this auction burst was the movie itself. "Collectors for this title are avid," he says. "There were more than a couple that made a play for it."

Smith says that while the auction ended in public Saturday, but the action happened well before and behind the scenes. "It was kind of done undercover," he says. "By the time it hit the floor, the bids had already been made."

Now that the sale is done, the poster has to make another trip. After being shipped from London to Dallas, it now has to reach its new owner. Smith won't say how it'll be shipped. That poster is a treasure. And it will, if only a brief moment, always have Dallas.