Raise your hand if you think Kyle Rittenhouse is a hero. Photo by Sam Balye on Unsplash
Kristian Hernandez was shocked after her little brother, a senior at W.T. White High School, texted her a photo of Monday’s homework assignment.

On its face, the essay prompt was typical: Choose from a list of six well-known figures and explain why you think they’re a “hero for the modern age.” What is unusual, though, is that students could opt to write about the alleged “Kenosha shooter,” Kyle Rittenhouse.

The prompt, Hernandez said, made her brother feel uncomfortable.

“It didn’t sit right with him that a white supremacist murderer was on the same page as people he recognized to be important historical figures,” she said. 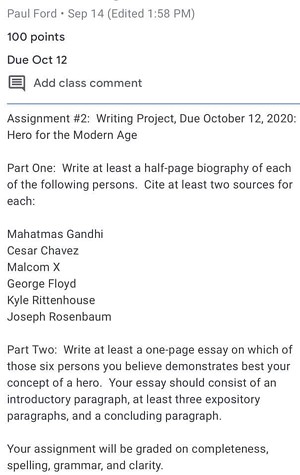 Note the spelling errors.
Courtesy Kristian Hernandez
Rittenhouse has not been convicted of murder. He has been charged with allegedly killing two people and injuring a third during last month’s protests for racial justice in Kenosha, Wisconsin. The 17-year-old is a fervent supporter of "Blue Lives Matter," a pro-law enforcement group that arose to counter the Black Lives Matter movement, according to CNN.

Liberals say Rittenhouse’s supposed act signifies a new breed of violent right-wing extremism. Many conservative politicians and pundits, though, herald him as a patriot for "defending America" in a nation divided.

The paper was assigned by English teacher Paul Ford, who asked students to write a one-page essay on which person they believe best exemplifies a hero. In addition to Rittenhouse, the list included Mahatma Gandhi, César Chávez, Malcolm X, George Floyd and one of Rittenhouse’s alleged victims, Joseph Rosenbaum.

Hernandez said she felt as though the first three names served as a “smokescreen” for the next.

Neither Ford nor W.T. White school officials responded to requests for comment.

Wednesday afternoon, Dallas ISD issued an apology in an emailed statement. District spokeswoman Robyn Harris said the prompt had not been approved by administration officials.

The campus removed the assignment and students do not have to complete it, Harris said. She also said the “appropriate steps” will be taken following an investigation, although it’s unclear what that means for Ford’s fate.

“Racial equity is a top priority in Dallas ISD, and we remain committed to providing a robust teaching environment where all students can learn,” Harris wrote. “It is important that we continue to be culturally sensitive to our diverse populations and provide a space of respect and value.”


“[Rittenhouse is] not a hero in the traditional sense, so I don’t know how appropriate that is for an assignment for students. And that’s what concerns me.” - Professor Mia Moody-Ramirez

A screenshot of the essay prompt appeared on Facebook Tuesday night, causing many to call for Ford’s firing. Some have jumped to his defense, too, saying that he could have been attempting to encourage a healthy academic discourse.

Intentions aside, Hernandez said Ford’s assignment reveals a serious lack of understanding. She said the alleged Kenosha shooter’s actions are indicative of an insidious, nationwide problem: the unchecked rise of violent white supremacists.

“When I see these types of acts by these young, white men, I also think of the El Paso shooter who drove …nine hours from Allen to El Paso to attack people who look like my brother,” Hernandez said.

Ford may have been attempting to be inclusive, said professor Mia Moody-Ramirez, the chair of the Department of Journalism, Public Relations and New Media at Baylor University. Some conservatives do view Rittenhouse as a hero, she said, so he could have been trying to accommodate that base.

Still, she said that Ford should have listed a less controversial candidate who hadn’t been accused of murder.
Also, the framing of the prompt was problematic, Moody-Ramirez said; by including Rittenhouse’s name on a list of “modern-day” heroes, it signals to students that he is one.

“He’s not a hero in the traditional sense, so I don’t know how appropriate that is for an assignment for students,” Moody-Ramirez said. “And that’s what concerns me.”

So, what does the word “hero” mean, anyway? According to the Merriam-Webster Dictionary, a hero is “a person admired for achievements and noble qualities” or “one who shows great courage.” Rittenhouse is not one, Hernandez said.

Aside from disciplining Ford, she said that the district should investigate whether he’s assigned similar homework in the past to see if there’s a pattern.

In addition to a public apology, Hernandez said Dallas ISD should ensure its policies reflect social and racial equity from the top down.

“We don’t want to just put Band-aids on situations; we want to fix the problem,” she said.

“Yes, this might be an isolated situation,” she continued. “But more often than not, if this teacher felt comfortable even giving this assignment, this is indicative of a larger thing.”
KEEP THE DALLAS OBSERVER FREE... Since we started the Dallas Observer, it has been defined as the free, independent voice of Dallas, and we'd like to keep it that way. With local media under siege, it's more important than ever for us to rally support behind funding our local journalism. You can help by participating in our "I Support" program, allowing us to keep offering readers access to our incisive coverage of local news, food and culture with no paywalls.
Make a one-time donation today for as little as $1.