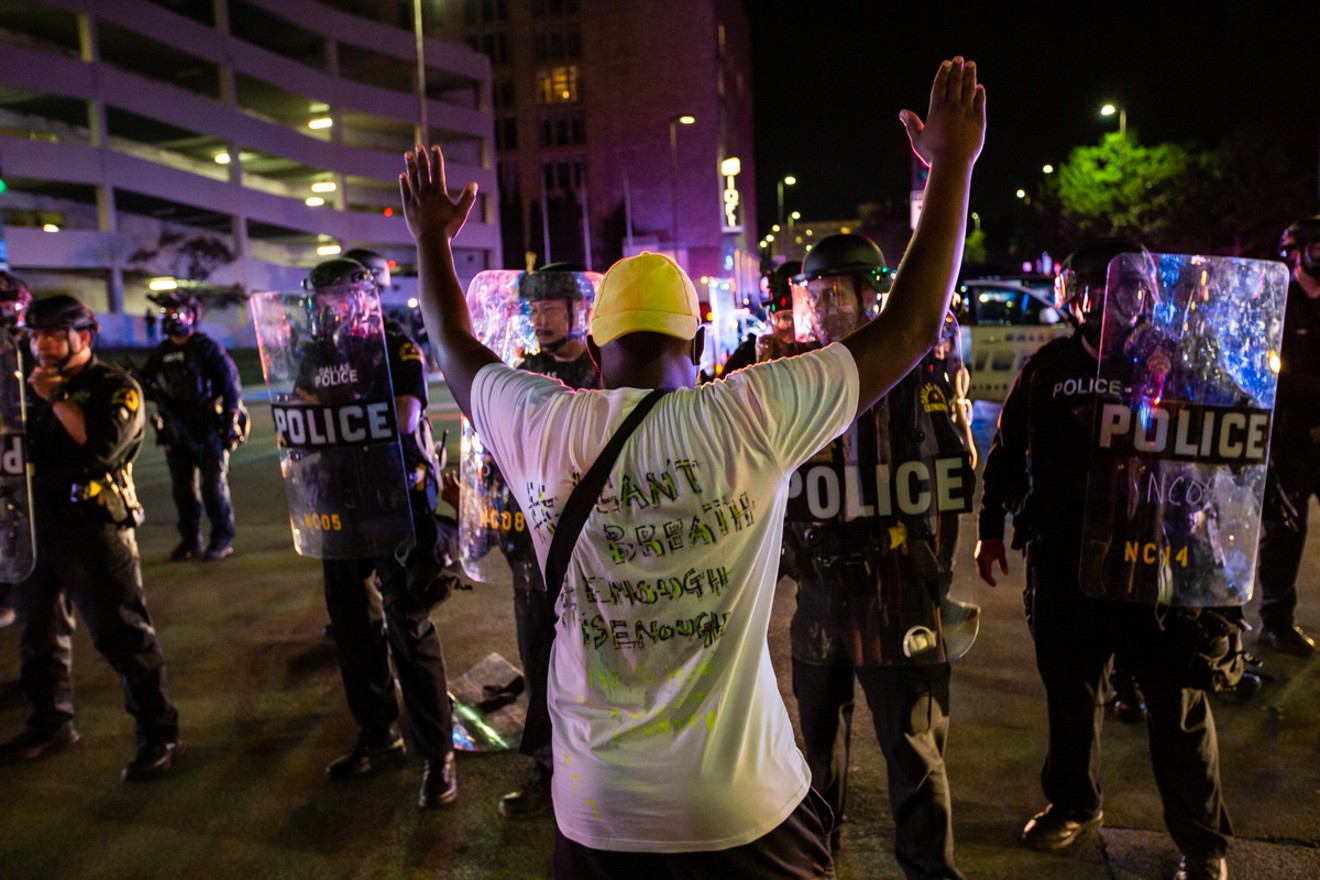 The protest, organized and advertised by the activist group Next Generation Action Network, began Friday evening in front of police headquarters, where local and regional civil rights activists and community organizers spoke to hundreds of people. Speakers levled criticism at both President Donald Trump and his opponent, presumptive Democratic presidential nominee Joe Biden, for their stances on civil rights.

Because the march was organized in solidarity with George Floyd, a black man from Minnesota who died on May 25 as Minneapolis police officer Derek Chauvin knelt on his neck, most of the rally focused on police brutality.

The rally drew a diverse crowd of protestors.
Melissa Hennings
“It’s become so common for any black individual to be targeted for racial profiling by police,” says protester Melissa Torres, a high school teacher from the Garland area who was in attendance with her child. “And I can tell you that because I lived it, and I’ve been with people who’ve lived it.”

The organizers and activists who spoke at the rally pleaded with the crowd to be civically engaged as volunteers distributed voter registration cards to attendees.


“We must hit the polls. Do you know where your city councilman stand[s] as it relates to the policies they put in place for law enforcement?” - Jasmine Crockett, civil rights attorney

“We must hit the polls,” said one of the speakers, civil rights attorney Jasmine Crockett. “Do you know where your city councilman stand[s] as it relates to the policies they put in place for law enforcement?”

For some, the unrest rooted in this protest was about more than just police brutality. Some of the black protesters in attendance expressed ire over a culture of racism and white supremacy that can also manifests itself in more subtle ways.

“I’m just enraged inside,” said 25-year-old Irving resident Dani Smith, who is black. “[People] don’t understand the struggles of being a kid in elementary school and being criticized for your hair … of working at a fast food restaurant and customers not wanting you to take their order because you’re black.”

Some participants took a knee symbolic of Colin Kaepernick's protest for black lives and now George Floyd's death.
Melissa Hennings
As the rally ended in prayer, one of the organizers gave instructions to the crowd on how to navigate the march. One of them specifically instructed the crowd to leave police interactions to designated organizers, but things quickly escalated on that front as the march progressed.

As protesters marched along Griffin Street, cops surrounded them and shot flash bangs and tear gas in an effort to disperse the crowd.

Once the crowd passed the office for the Dallas Police Association, one hoodie-wearing protester graffitied the letters “ACAB” (acronym for “All Cops Are Bastards”) on one of the windows. As a handful of people witnessed this, one marcher laughed, “There are too many eyes for this shit.”

Protesters then cornered two police officers — one white, one black — who stood stoically while being lambasted as the tear gas, flash bangs and smoke bombs continued. One black marcher repeatedly yelled, “Uncle Tom” at the black officer, while a white protester yelled, “Do you even care?” at the white officer.

It wasn’t long before the incrementally thinning crowd walked along Interstate 35E and blocked traffic on both the north and southbound roads. As police confronted the protesters in the vicinity of cars congested in traffic, marchers promptly retreated through Dealey Plaza. Most of the protesters made it to the 200 block of Lamar Street when police blocked off and teargassed adjacent intersections.

On the intersection of Lamar Street and Wood Street, four officers on horses dispersed the few lingering protesters, one of whom left while yelling, “Try not to beat your wife when you get home.” 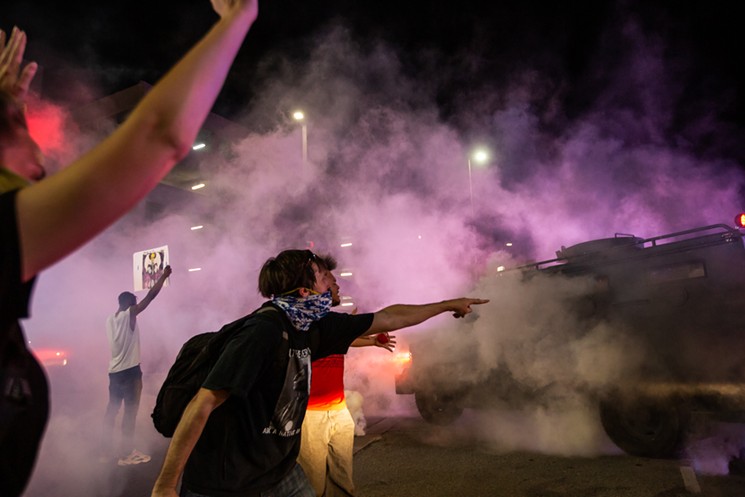 The police unleashed gas into the crowds later in the night.
Melissa Hennings
By this point, a small group separated from the majority of the protesters, who were attempting to return to the Dallas Police Headquarters. This small group still persisted marching well into Saturday morning. NBC DFW reports that protesters within this group eventually made their way to Deep Ellum and looted businesses like Sneaker Politics and the Point Skate Shop. They also broke the windows and slashed the tires of four Dallas police cruisers.

Dallas Mayor Eric Johnson took to Twitter on Friday night and Saturday morning to address the protest and the subsequent looting:


The protesters in Dallas tonight have largely been peaceful and respectful. I fully support their calls for justice.

But we have a small handful of people who apparently have other agendas and have been destroying and stealing property. We can’t have that. It honors no one.

We can’t allow the looting we have seen at times tonight in Dallas. A few people clearly had ulterior motives when they showed up to an otherwise peaceful protest. It’s time to go home.