Boxes of Kleenex lined the aisles.

Ortiz’s family sat silently in the front row while Wilson spoke about the city’s role in safeguarding young children’s lives. “We are all in agreeance this has to stop,” Wilson said. “This should not continue.”

He went on to address the kids in the room, saying, “What you’re going through today is not the end. Tomorrow will come. Go home, calm down, go to bed because tomorrow is a new day with new opportunities.”

“Other kids — other sixth graders — are bullying the kids into selling drugs."

Derek Miller, pastor of Hope City, encouraged anyone with concerns, suggestions or stories about bullying to come to the mic to speak. Most parents offered up words of support to struggling parents or suggestions for kids to get involved in church.

One woman, however, brought up a new claim. Sophia Rodriguez, an Oak Cliff resident and parent, told the crowd that her son in sixth grade was bullied into selling drugs, and he was not the only one. “Other sixth graders are bullying the kids into selling drugs,” she said. “Kids are smoking weed and popping pills in the bathrooms and getting beat up in the bathrooms. I worked with the school, but drugs are an issue in our schools.”

Rodriguez said there is an abandoned house close to the L.V. Stockard Middle School where kids go to do drugs. A DPD officer approached Rodriguez and asked her about the abandoned house she spoke about earlier during the town hall meeting. The officer assured her they would go check it out.

After the town hall meeting was over, Rodriguez told the Observer that her 12-year-old son was friends with Ortiz, the young boy who committed suicide, who she claims also was being bullied into selling drugs. “If they don’t, they beat them up or threaten to kill them,” she says.

“Julio’s parents didn’t know about the drugs until after the fact,” Rodriguez says. “After he died, a bunch of kids came forward and talked about the drugs. Julio was a nice kid. He just didn’t want to scare his parents.” 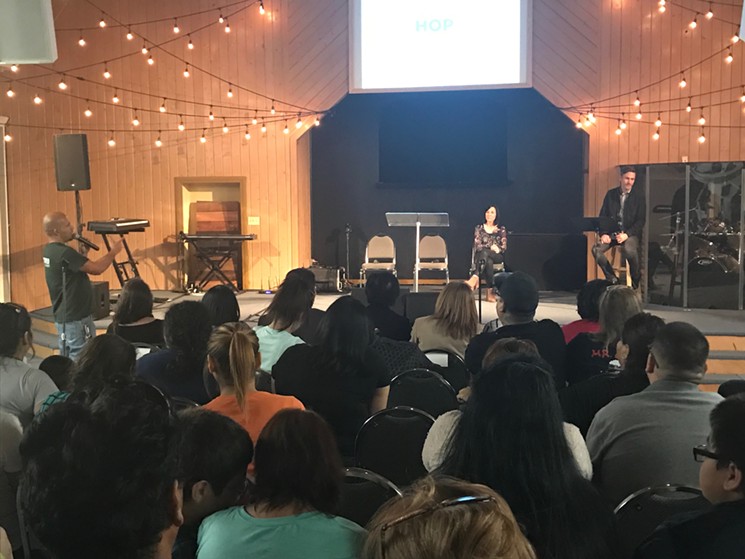 Concerned parents filled the room to discuss the suicide.
Paige Skinner
KEEP THE DALLAS OBSERVER FREE... Since we started the Dallas Observer, it has been defined as the free, independent voice of Dallas, and we'd like to keep it that way. With local media under siege, it's more important than ever for us to rally support behind funding our local journalism. You can help by participating in our "I Support" program, allowing us to keep offering readers access to our incisive coverage of local news, food and culture with no paywalls.
Make a one-time donation today for as little as $1.