Some Dallas ISD Teachers are Quitting Over COVID-19 Fears 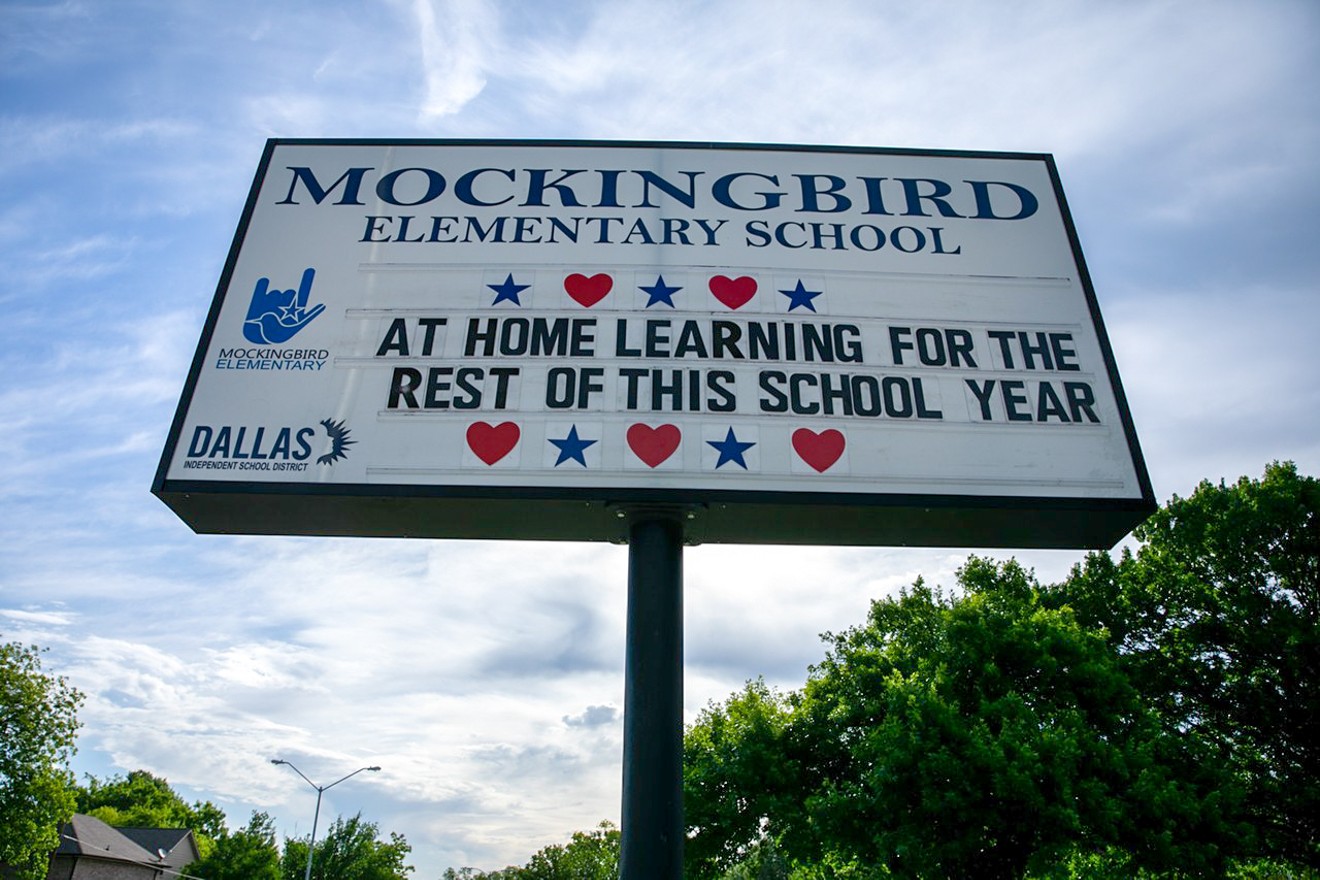 A number of DISD's teachers wish this were still the case. Nathan Hunsinger
Sam Damask didn’t have a Plan B when he resigned from Dallas ISD. Tuesday night, the first-year middle school math teacher quit because of coronavirus.

Students poured back into school buildings Monday as part of the district’s hybrid learning model. With kids back in class, Damask said he soon realized what a Sisyphean task it was to prevent rampant school spread.

Even when students would wear masks, they often didn’t do it properly, he said.

“I don’t want to act like the district wasn’t trying; they’re trying really hard,” he continued. “I’m saying it’s a problem that I don’t think can be solved, because kids shouldn’t be in classrooms.”

The coronavirus pandemic has forced school districts nationwide to scramble to create safe ways for kids to return to the classroom. In Texas, schools have to reopen for in-person learning or risk losing state funding.
Many teachers complain that they don’t feel supported by their district, and now, some are considering quitting altogether.

Anger over the district’s treatment of teachers rose to a boil when the DISD board gathered for a briefing Thursday. Board members were seated around a dozen long tables draped in black cloth. Some trustees attended via conference call. Anyone who wanted to speak or attend the meeting also had to listen through Facebook or call in; they were not allowed to attend the meeting in-person.

“Why should I be forced not to help my family if they need it, when I could teach from home?” – former DISD teacher Sam Damask

One of those speakers, Jacqueline Martinez, delivered a scathing rebuke.

“It has been nine days since the district lost a beloved Oak Cliff educator and my former colleague Mr. James Beckers to COVID-19. He served as a pre-K and kinder teacher in the Dallas Independent School District for 19 years and was a pillar in the community.”

Martinez’s litany of accusations toward the district included its refusal to acknowledge the death of one of its own, which she accused the district of trying to sweep under the rug. There is no mention of Beckers’ passing on any of the district’s social media pages, including the school where he taught, Cochran Elementary, except for one person who repeatedly posted a GoFundMe link in the comments of other posts.

“I find it extremely disrespectful, offensive and tasteless that both the school where he worked, as well as the district have failed to publicly acknowledge both his service and his death. He deserves better,” Martinez told the board.

Beckers returned to his classroom at Cochran on Sept. 1 before students came back, to prepare for the upcoming school year. He was rushed to the hospital Sept. 9, where he was immediately admitted into the intensive care unit.

In a post from his family: “After a couple days of fighting, he experienced a heart attack and was put on a ventilator. Days passed and he was taken into surgery due to his lung collapsing. He fought really hard for 21 days in the ICU until God decided to take him on Tuesday night after much effort from the doctors and nurses.”

While some teachers aren’t waiting around to see if they might be the next to succumb, DISD educators so far have not fled the job in large numbers. Sixty-two teachers have resigned since the start of the school year, district spokeswoman Robyn Harris said in an email. Of those, 16 left for COVID-related reasons after in-person instruction resumed.

So far, that resignation rate is trending on average or less than 2019’s, she said, and teacher vacancies are “averaging 50% less than this time last year.”

Rena Honea, president of Dallas’ Alliance-AFT teachers’ union, said that at least three educators have contacted her this week to ask about the resignation process. Like Damask, they feel as though it’s impossible to conduct in-person classes safely, Honea said.

Many teachers are complaining that the district has not been transparent in its coronavirus-related communications, Honea said.

“It’s important that people stay alive,” she said. “And that’s what they’re afraid of, because they’re hearing of cases being confirmed, but there’s no real information.”

As case counts continue to rise in Dallas County, teachers are becoming increasingly fearful of bringing the virus home. Hospitalizations have been inching higher in recent weeks, and public health experts fear that school and bar openings could usher in a wave of new cases.

Even with social distancing decals in hallways and air purifiers in classrooms, Damask said he didn’t feel safe teaching indoors, where the virus can hang in the air for hours. On top of that, it is difficult to deliver simultaneous lessons to both in-person and online learners, he said.

It’s even harder to get students to remain spaced 6 feet apart when they’re standing in line, he added.

Although the district was trying its best to introduce effective safety measures, it still isn’t enough, Damask said. Every day, cases continue to climb, he said.

“We know a lot of younger students, middle school and elementary, aren’t going to show symptoms, but they can still pass it,” Damask said. “So it just seems like a recipe for disaster.”

In September, Martinez told WFAA she was also considering quitting. She had applied for an Alternative Work Arrangement, which allows teachers to work from home if they can perform 100% of their job's essential functions. She was denied, she said, despite having diabetes.

Damask said that he’s spoken with multiple teachers who have applied for an AWA waiver who were also denied, including some who have serious heart conditions. When people with co-morbidities contract COVID-19, they are at a higher risk of suffering from severe symptoms or death, according to the Centers for Disease Control and Prevention.

Some teachers have been approved for an AWA waiver, Harris said, but the district did not share an exact number.

Damask said he decided to quit after he learned that a student of his was quarantining because they had contracted the disease. Many more could be asymptomatic and unknowingly spreading it to others, he said.

In the end, Damask said he had to make the choice between teaching and seeing his loved ones. He chose the latter.

“Are there high-risk people I cannot be around because I’m teaching? Yes. Is that a problem? Absolutely,” Damask said. “Why should I be forced not to help my family if they need it, when I could teach from home?”

Dallas ISD opened its doors this past Monday. High schools are using a hybrid model that splits the students into two groups and trades days they attend in-person classes. Elementary and junior high parents were given a choice of either face-to-face or distance learning (only one elementary school, Lakewood, is doing the hybrid model because so many parents chose in-person learning). A bit more than half of Dallas ISD students chose in-person learning.

While the total number of cases among DISD staff and students may seem low, the trend here and across the state is that teachers are getting sick at a much higher pace than students.

The Texas Department of Health and Human Services is tracking data statewide. Through the week ending Oct. 4, they report there were 7,620 cumulative positive student cases and 5,227 cumulative staff cases. The basic ratio of students to teachers is 15:1.

During her allotted three minutes with the trustees, Martinez demanded to know when Dallas ISD is going to realize the risk teachers are taking.

“We’ve already lost a treasure of a teacher. What is it going to take for you all to make the right decision and prioritizing testing and academic data and start prioritizing human life. The only acceptable number of losses is zero. And you've already passed that quota,” Martinez said before hanging up.
KEEP THE DALLAS OBSERVER FREE... Since we started the Dallas Observer, it has been defined as the free, independent voice of Dallas, and we'd like to keep it that way. With local media under siege, it's more important than ever for us to rally support behind funding our local journalism. You can help by participating in our "I Support" program, allowing us to keep offering readers access to our incisive coverage of local news, food and culture with no paywalls.
Make a one-time donation today for as little as $1.