Did You Know You May be Paying Into a South Dallas Slush Fund?

Dallas City Council member Kevin Felder supports tough reforms for the South Dallas Fair Park Trust Fund. dallascityhall.com
The debate about things would change a lot around here if everybody suddenly knew who’s paying for what. Dallas City Council member Lee Kleinman caught one these jarring little tells and pointed it out at a council committee meeting Monday. See if you agree with me that it’s something nobody knows about but everyone should.

The South Dallas Fair Park Trust Fund was set up 30 years ago to spur economic development in impoverished African-American neighborhoods near Fair Park, the exposition park two miles due east of downtown where the State Fair of Texas takes place every fall. The theory of the fund grew out of a time and conditions that prevailed before most of the big white-people cultural institutions fled Fair Park for the new Arts District on the far side of downtown in a place more accessible from the affluent Park Cities area.

There is no way to know if the creation of the fund was somehow a factor in that flight. Generally speaking, white people move their stuff around a lot anyway.

Before the institutions left Fair Park, the idea was this: All of these rich white people keep streaming through South Dallas all the time with their door-lock buttons down so they can party inside the heavily fenced and patrolled enclave at Fair Park. Why not charge them a toll?

Most of the people in power in the city at the time thought it was a great idea, even the rich white people. The City Council was in chaos. Racial division in the city felt as if it might explode at any moment. Something needed to be done.

The year the Fair Park fund was created, 1987, is the same year the Tom Wolfe novel Bonfire of the Vanities was published, introducing America to the term “steam control.” Steam control was Wolfe’s phrase for placating gifts or tribute that American white, urban power structures offered to black leadership in cities across America then — a system of installment payments for peace.

Sure, if you wanted to, you could call it blackmail. But then again, white leadership would not have had to make any payments at all to anybody if it had just given up white supremacy entirely and helped create a truly just, nonracist society. Pick your poison, pay your price.

The problem with steam control, as opposed to justice, was that the steam didn’t spread out very far. With true justice, everybody gets a piece. With steam control here, former Dallas City Council member Diane Ragsdale, a guiding force in the creation of the trust fund, got a shopping center.

Ragsdale’s shopping center comes back to the trough at City Hall every couple of years for another half-million dollars or so in steam … oh, excuse me, in financial support. Yes, that’s what we call it. Financial support.

The one white guy in Dallas who understands South Dallas better than any other white guy I know is Robert Wilonsky, who used to be here at the Dallas Observer until he was demoted to a columnist at The Dallas Morning News. His dad, Herschel, owned a business in South Dallas for many years and later served on the board of the trust fund.

The Wilonskys — the whole family — have a history of civic involvement and general good faith in the community. The fact that Herschel Wilonsky once thought the trust fund had a shot at doing some good for somebody is proof enough for me that it once had a shot. And, in fact, it did do some good.

At the City Council committee meeting Monday, Kevin Felder, once on the board and now the council member from the area, ticked off a list of small-business loans that trust fund made back in the day that helped create what are now thriving black-owned enterprises. It was good to know.

Felder, however, spoke in support of imposing tough reforms on the trust fund, including ordering it to stop giving away money as grants to cronies, which is what the fund has fallen into almost exclusively in recent years. City Manager T.C. Broadnax and his staff have proposed a list of rigorous reforms, which Felder supports, aimed at getting the fund up out of the financial mud and back to being a tool for economic development instead of a slush fund for crony patronage.

Sadly, the board of the fund voted recently to reject all of the serious financial reforms proposed by Broadnax. Those questions go to the City Council at some point in the near future. With the support of Felder, in whose district the fund’s purview falls, for the most part, the reforms would seem to stand a good chance of passage in spite or because of the fund board’s recalcitrance. 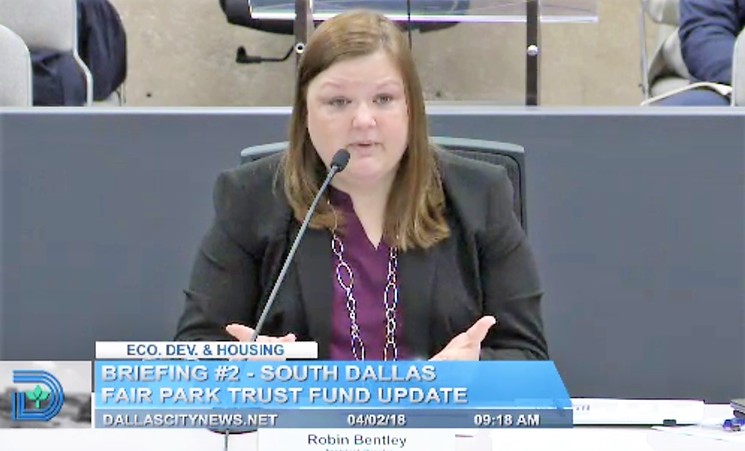 Assistant City Attorney Robin Bentley reluctantly confirmed that the South Dallas Fair Park Trust Fund is subsidized by everybody's water bills.
dallascityhall.com
The funniest and saddest line about the Monday committee meeting came from Wilonsky as the kicker to a column he wrote about it. He recounted the fund’s long, agonizing history of general misfeasance.

Talking about its resistance to reform now, he paraphrased the great line at the end of Roman Polanski’s 1974 film classic Chinatown. Everything said at the meeting, Wilonsky wrote, has long been known and has never made any sense. Knowing it has never made a difference in the past and may not make one now.

“Because it's South Dallas, Jake.”

We laugh. We cry. We nod our heads sadly.

So what did Kleinman say that might make a difference? Let me explain. The basic concept of the fund was the toll. The rich white people come in to attend events inside their guarded enclave at Fair Park. They pay money for tickets.

So why not take some small portion of that ticket money, treat as a kind of tax and give it to the trust fund to use for economic development? Of course the idea was dressed up in all kinds of fine rationale about forging a bond between Fair Park (the rich white people) and South Dallas. Like charging a toll is really going to forge a bond.

Anyway, it was just a way to get some money, and I think most of us who were around at that time could understand it at some level. The mantra on the street at the time was, “No justice, no peace,” but the mantra in the back room was, “No justice, 15 percent of the ticket revenue.”

Here is what Kleinman caught (I’m sure he already knew) at Monday’s meeting. Assistant City Attorney Robin Bentley had answered another council member’s question earlier about the fund’s sources of revenue. She mentioned the ticket toll, but she said something about that money being insufficient, so it had to be bolstered with cash from something called “The Pilot Fund.”

It flew by me when I first heard it, but I did kind of wonder. I thought, “The poor dear pilots, are they having to pay a toll now, too? They’re just pilots. They fly right over. They never set foot. Oh well, forget it, Jake.”

But Kleinman pinned it down. He asked Bentley, “Where do the Pilot funds come from?”

“The Pilot funds come from the water department,” she said.

“So we are subsidizing to the tune of $400,000 on everybody’s water bill? How many water accounts do we have?”

Greeted with silence, he answered his own question: “About 250,000. So everybody’s water bill is another buck fifty to subsidize [the South Dallas Fair Park Trust Fund]?”

OK, wait a minute, Jake, that’s not Chinatown. That’s me. That’s my water bill. I did not know. No one ever told me that. I had no idea I was paying into the South Dallas Fair Park Trust Fund.

I was OK with the toll when I thought it was only the rich people paying. I felt bad briefly for the pilots, of course, but in the end, I was willing for them to make a small sacrifice, too. But me making the sacrifice — now we need to talk. Steam control is fine by me as long as it’s not my steam. And thank you, Lee Kleinman.

Just beneath the surface, we are witnessing a quiet revolution — quiet, so far — at City Hall. Under the tutelage and direction of Broadnax, the new city manager and the first in recent memory to recruited from outside the ranks of long-term City Hall staff, we are finding out more and more about how things really work.