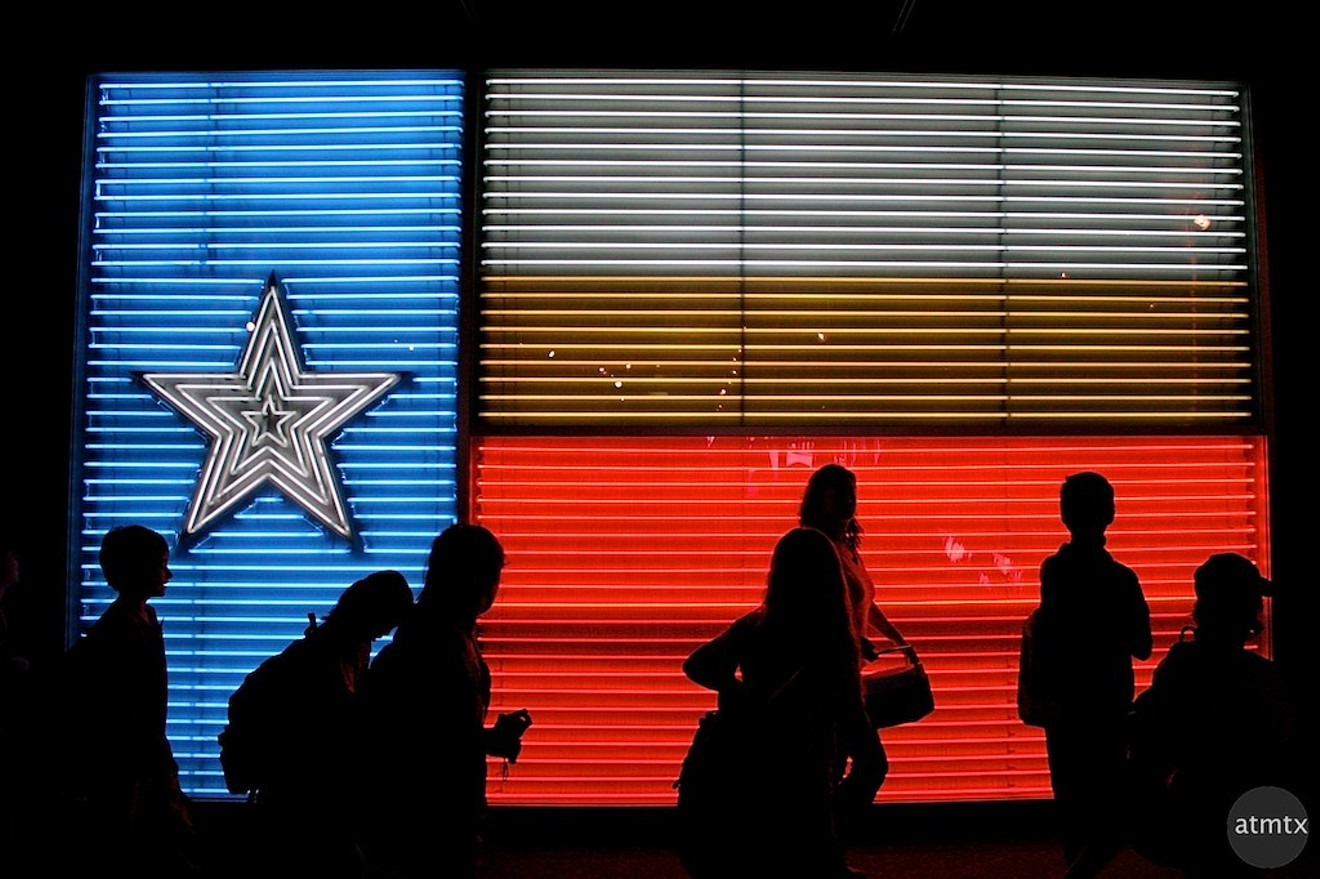 Secession is on some Republicans' minds. "Neon Texas" by atmtx is licensed under CC BY-NC-ND 2.0
Wedged in the state GOP’s new far-right party platform is the assertion that “Texas retains the right to secede.” It’s an idea that some folks, like Texas Nationalist Movement President Daniel Miller, have long lusted for.

But even though the idea has gone from fringe to somewhat less fringe, experts say it’s nowhere near the realm of possibility.

During a recent interview with Common Sense host Anna Perez, Miller argued that “alleged experts” tend to get called on for the secession debate. He continued that these people are usually along the lines of “a third-rate adjunct professor from Bug Tussle Community College.”

He then insisted that neither the U.S. nor Texas constitutions bar the Lone Star State from becoming a loner nation.

“Ultimately, this is a question for the people of Texas to answer,” the one-time lieutenant governor candidate said. “The questions of self-government and self-determination are always left to the people.”
Not so, said Dr. Cal Jillson, a political science professor at Southern Methodist University, who’s authored numerous books, chaired SMU’s political science department and served as a member of the Council on Foreign Relations. He called the idea that Texas could feasibly leave the Union “nonsense,” adding, plainly: “The answer is that Miller is wrong.”

Jillson explained that after the Civil War, the U.S. Supreme Court declared in Texas v. White that the Union is perpetual, so states can’t simply leave. The 1869 case also established that there are only two ways for a state to depart. Either all the other states can agree to let the state in question go, or the defector can try once more to fight its way out.

“We just squashed you, but you can try it again,” Jillson said, chuckling. “So Mr. Miller had better clean his weapons, because it’s going to be a hell of a fight.”

The professor noted that we'll have to abide by Texas v. White, unless the U.S. Supreme Court ever overturns it or Congress writes a law that changes the result. It’s also worth mentioning that certain battle tanks could reach the Austin Capitol from Fort Hood in roughly an hour, he said, laughing drily: “Go for it, boys.”

"We have no independent authority to secede, unlike some people believe." – Adrian Shelley, Texas office director at Public Citizen

If Texas were actually able to leave the U.S. without sparking Civil War II, its inner workings would likely face drastic shifts.

Adrian Shelley, Texas office director for the consumer advocacy nonprofit Public Citizen, pointed out that around 10% of the state’s population isn’t connected to the main power grid, the Electric Reliability Council of Texas (ERCOT). Questions remain surrounding the roughly 3 million Texans who would then be getting their energy from the U.S., now a foreign nation. Treaty time.

But one of the main things Shelley fears is that Texas would work to dismantle the Clean Air Act here. He said some of the mothball fossil fuel energy generation would likely come back online, without mandates from that law hanging overhead.

Around 17,000 Texans already die from air pollution each year, he said. That number would just start to increase, leading to “pretty serious consequences for public health.”

Certain rank and file Texans might believe Texit is possible and that we should go for it, Shelley said. But he thinks the state’s leadership understands how dependent we are on the federal government and that we have no independent authority to secede.

“I hope that it’s not an idea being taken seriously by the folks who are actually in power,” he said, “because I suspect that they’re not naïve enough to think that it would be a simple matter."
KEEP THE DALLAS OBSERVER FREE... Since we started the Dallas Observer, it has been defined as the free, independent voice of Dallas, and we'd like to keep it that way. With local media under siege, it's more important than ever for us to rally support behind funding our local journalism. You can help by participating in our "I Support" program, allowing us to keep offering readers access to our incisive coverage of local news, food and culture with no paywalls.
Make a one-time donation today for as little as $1.