Here's a Culinary Agenda for the Next Dallas City Council Trompo is supposed to be opening a second location, but Dallas city government delays stand in its path. Kathy Tran
Dallas is halfway through electing a new slate of city council members. Most of the seats were decided in the May 1 general election, with six to be decided by runoffs on June 5.

While we’re preparing for the new council—and while there’s still time for voters to ask questions of the runoff candidates—I thought I’d present an agenda for culinary change in Dallas. Here are seven concrete ways that the next council can make our city a better place to eat and drink.

By the way, to any future council members reading this, if you package these items up in one big omnibus agenda item, may I humbly suggest a name? Call it the Enabling New Culinary and Hospitality Innovation and Leadership Across Dallas Act (ENCHILADA).

Fix the permitting process. Permits to do just about anything with a restaurant take weeks, or even months, to obtain because of a massive backlog and a staffing crisis. Take Trompo, the beloved taco shop which is supposed to have a second location in East Dallas but which is struggling through city government-induced delays at each stage in the process.

At one point in 2020, there was a backlog of 981 requests stuck in the prescreening stage alone. Last month, Sharon Grigsby of the Dallas Morning News reported that City Hall still hasn’t figured out a long-term solution to the mess, aside from asking for more money.

If the Dallas City Council can make only one change to transform the city’s dining scene, they should make it easier and faster to get permits and let businesses grow.

Eliminate minimum parking requirements. Right now, every single bar and restaurant is required to provide access to one parking space for every 100 square feet of space inside. That’s not just the dining room, but bathrooms, closets and so on, regardless of the number of seats for customers. (Exceptions can be made, but guess how much red tape that takes.)

During the coronavirus, it was absolutely absurd that a restaurant doing takeout and delivery only, running a skeleton crew of essential workers and serving a limited-capacity audience, should have dozens of parking spaces. Many businesses obtained temporary permits to turn their lots or street parking into patios or “parklets.”

Even after everyone’s back in dining rooms, the blanket requirement that all Dallas restaurants have ample parking for everyone doesn’t make sense. Not everyone drives. Some businesses are right next to DART stations, inside hotels or in ultra-dense, walkable neighborhoods. Some bars pour such strong drinks that people shouldn’t be driving home anyway.

The dining area and parklet outside Revelers Hall in the Bishop Arts District
Kathy Tran
As developer Nathaniel Barrett tweeted last week, parking rules also require a new business to spend more money to get started. “Costly parking requirements have the effect of making marginal projects infeasible,” he wrote. He added an expected goal for eliminating parking rules: “In lower-income areas, projects previously not possible, become possible thanks to reduction in paperwork and costs.”

Yes, it’s Dallas, and a lot of people will drive to dinner. But instead of micromanaging parking lots, let the free market decide. If people can’t get to a restaurant, that business will find out on its own. But if people can get to dinner, why create unnecessary government regulation over how they do so?

Open up the food truck universe. Dallas’ food truck and trailer scene lags behind that of cities like Austin and Houston, and even some of our own suburbs, like Garland, where a Vietnamese food truck park appeared a few months ago in a parking lot.

The culprits? Relatively high costs to get started, and restrictions on where trailers can park, designed to make sure that the market isn’t too crowded and brick-and-mortar restaurants don’t see their business threatened.

The good news is that Dallas is taking action on food trucks and trailers. A committee, which includes small business owners and former Observer food editor Taylor Adams, is looking at practices in cities like Austin and preparing recommendations for Dallas to follow. I hope that when their final report comes in, the city council acts on it.

Put “scores on the doors.” Cities like New York, Los Angeles and Toronto have implemented health inspection grade systems in which restaurants and bars display their inspection grade in the window or another prominent place. Some cities have given the idea catchy names like “Scores on the Doors.” If you traveled to one of those cities before the pandemic, you might have walked into a restaurant with a gleaming green “A” grade in the window.

A study in New York City showed that public display of inspection grades is correlated with higher compliance on health inspections, including higher odds that a failing restaurant would clean up its act. 91% of New Yorkers approved of the program. The only downside is that everyone will need a little bit more printer paper. This one’s a no-brainer. 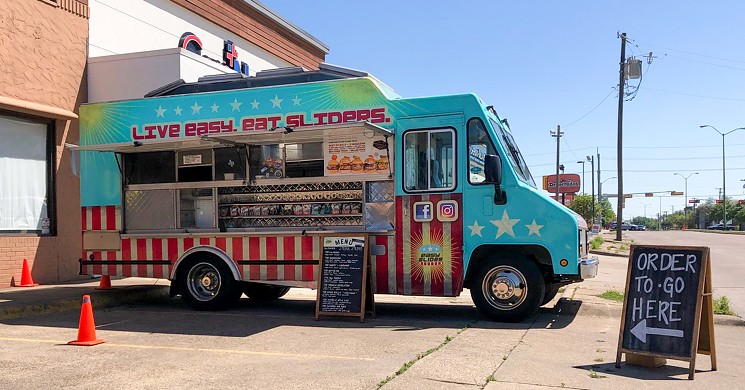 Easy Slider, one of Dallas' iconic food trucks.
Caroline Perini
Put a cap on the fees charged by delivery apps. First of all, delete all the delivery and food-ordering apps off your phone. They’re leeches and predatory middlemen, and they charge restaurants such massive fees that in many cases, restaurants don’t actually make any profit through them. Some of them even falsely advertise restaurants which are not in their system.

Big cities across America spent much of 2020 rushing to enact ordinances which capped the fees that apps like Uber Eats can charge restaurants. The most common cap appears to be 15%. At the very least, it would be easy for Dallas city council to convene a working group that can look at those new laws and see if they are succeeding, or if they are having any unintended side effects.

If other cities are having success helping their restaurants by capping apps, we should be next.

Do literally anything to reduce our city’s physical segregation. It’s the year 2021, and yet you can still look at a map of Dallas, point to a neighborhood and guess whether a majority of its restaurants are white-owned, Black-owned or chains. You still have to drive to a suburb for good Chinese food. It’s the year 2021, and according to local leaders like Miguel Solis, segregation in Dallas is actually getting worse.

I know I’m being insanely shallow and reductive by framing the existential crisis of segregation in restaurant terms. That’s not my intention. There are many, many reasons for our government to control development in a way that doesn’t produce this kind of demographic landscape. Other commentators have made those arguments very persuasively.

But, well, if you’re looking for yet another reason to oppose segregation, why not think about food? I’m sick of explaining to out-of-town visitors that certain cuisines are only in certain neighborhoods because we live in a systemically racist city. That’s not exactly something to advertise to tourists.

Make decisions based on real knowledge and data. Okay, I’m really talking about just one council candidate here. David Blewett, the District 14 incumbent who is running in a June 5 runoff against challenger Paul Ridley, repeatedly appeared to misunderstand COVID-19 and its health risks during the pandemic. In one city council meeting, Blewett, a real estate financier, challenged the testimony of actual scientists and doctors.

If you live in District 14, please keep that in mind when you vote next month.
KEEP THE DALLAS OBSERVER FREE... Since we started the Dallas Observer, it has been defined as the free, independent voice of Dallas, and we'd like to keep it that way. With local media under siege, it's more important than ever for us to rally support behind funding our local journalism. You can help by participating in our "I Support" program, allowing us to keep offering readers access to our incisive coverage of local news, food and culture with no paywalls.
Make a one-time donation today for as little as $1.