An Insider's Guide to the Best Reservations for DFW Restaurant Week 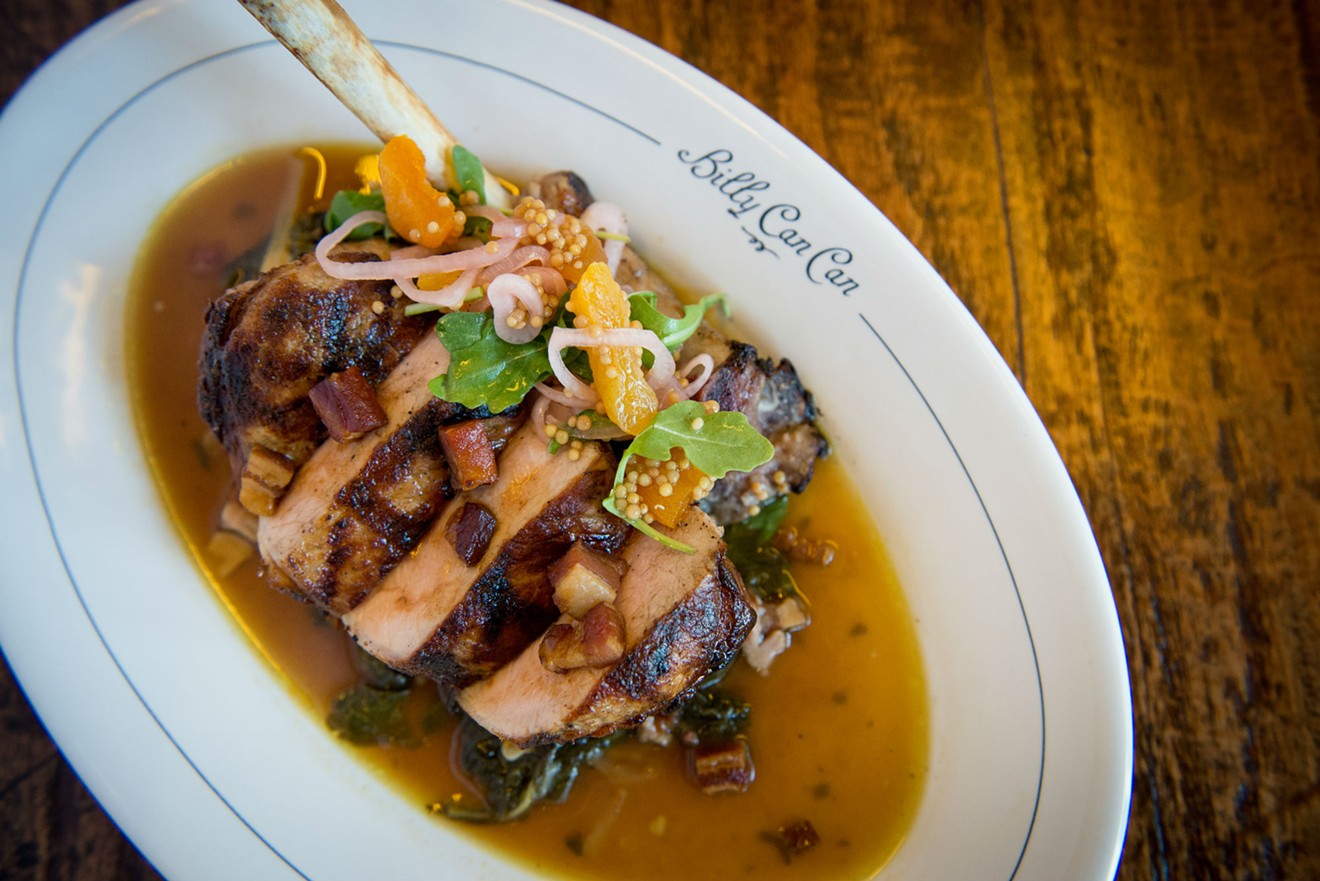 Long-boned pork chop at Billy Can Can is one of the meals available during Restaurant Week. The three-course meal is $49. Alison McLean
Monday morning, DFW Restaurant Week announced the list of participating restaurants, and if we’re honest, reactions to the news varied more than some might think. Sure, loads of diners around town are all agog, making reservations at the most in-demand Dallas restaurants for dining dates nearly a month away. (Count us among those.)

Others are gleefully pointing out that they’ll be avoiding participating restaurants during the month of August because those places will be packed with diners looking for a deal. A few might be saying, “What’s DFW Restaurant Week?” while others think, “I’ve been meaning to check that out for years.”

Whichever camp you fall into, there’s probably a thing or two that will surprise you about this foodie event that’s become a Dallas tradition, including what’s new this year. After studying the menus of almost all of the 99 participating restaurants, I’m convinced that just about anyone can enjoy this dining experience.

There’s a wide range of cuisines offered in restaurants from Weatherford and Fort Worth to Rockwall and from Frisco to the Bishop Arts District and South Arlington. There’s something for newbies as well as longtime devotees, big spenders as well as deal seekers and vegetarians (yes, at last) and steak lovers.

Here’s a straightforward guide to DFW Restaurant Week with the pros (which are many) and cons (which are few, but valid) to help you enjoy eating for charity your own way.

What It’s All About?

Originally known as Dallas Restaurant Week, the weeklong event was planned as a way to bring diners into restaurants during the slower summer months and raise funds for local charities at the same time. Now in its 24th year, the event has expanded from one week of dining specials to four weeks, and restaurants all over DFW participate.

The success of the annual event is most apparent in its benefit to The North Texas Food Bank and Lena Pope Home; over the years, the event has raised over $8 million in donations for the two charities.

The basics are simple. Participating restaurants offer a three-course meal for either $39 or $49 and/or a two-course lunch for $19 during a specified week (or multiple weeks) in August and early September. For each meal purchased, a donation of $8, $10 or $2 respectively is donated to the North Texas Food Bank in Dallas County or Lena Pope Home in Tarrant County.

As in years past, you must make reservations in advance specifically for Restaurant Week. Then, when you arrive to dine, you’ll receive a special menu listing the course offerings, and other than that, it’s just like dining at a restaurant any other time.

The best news about this year’s restaurant list is that quite a few eateries are offering vegetarian options. (More on that below.) And after the success of last year’s takeout offerings, some will offer that experience again.

First-time participants this year include Twigs American Restaurant and Windmills Brewery | Restaurant | Music at Grandscape in The Colony as well as Bulla Gastrobar and Ebesu Robata & Sushi in Plano. New Dallas restaurants include Yardbird Southern Table and Bar, Enrique Tomas and three of the restaurants in Eataly at NorthPark.

In past years, a few restaurants didn’t offer their regular menu during Restaurant Week, which meant a very limited selection for all diners during the selected weeks. A look at this year’s menus shows that many restaurants have expanded the number of course selections offered. A couple of restaurants, notably Jalisco Norte and Tulum, went the other way and are only offering one selection per course, possibly so they can more efficiently serve other tables from the regular menu in the same evening. All of this is good news.

With multiple weeks of participation, two different price points and restaurants from quite a few cities, making reservations can get complex, even on the newly redesigned website. Viewing the menus is a crucial part of deciding where to book, and I found that the menus frequently offer additional information like participating dates to help you. You'll need to find the menu on each restaurants' website.

If you’re looking to make reservations at a familiar favorite, you can use the search bar to find it instead of paging through the whole list. Keywords like the type of food (Italian, Mexican) also work well in the search bar.

Once you’ve chosen a restaurant, simply call and make reservations for your chosen date and specify that the reservation is for Restaurant Week. Reservations will fill up quickly for some of the restaurants.

Pro Tip: If you want to try a restaurant that’s already booked solid, set a reminder on your calendar to try again once dining starts. With the dates a whole month or more away, a few cancellations are likely.

For years, Dallas diners have known that this is the only time you can get a meal priced at $49 at some otherwise expensive restaurants. This year, Julian Barsotti restaurants Fachni and Nonna are on the list along with Nick and Sam's, The Mansion at Turtle Creek, Al Biernat’s, III Forks and Del Friscos, among others.

Adding wine or cocktails with your meal can run up the tab quickly, but at Il Pastaio at Eataly, $39 includes two glasses of paired Italian wines (no reservations for this one, it's walk-up only).

Brazilian steakhouses 12 Cuts and Texas de Brazil offer their churrascaria experience for $39. In some cases, that’s a savings of $12 or more for a couple and a $16 donation to charity. I call that a deal.

The Best Ways to Be Extravagant

If price is not an issue, you can order additional courses or upgraded entrees and enhancements. Paired wines and cocktails are also offered on many Restaurant Week menus.


At Asador, you can order a fourth course, either an appetizer or dessert, as well as a specialty cocktail to go with each course for $10 each. At Musume, order a bottle of The Prisoner cabernet for $85 and an after-dinner Japanese whiskey for $14.

Del Frisco’s Double Eagle Steakhouse offers upgraded entrees such as a 12-ounce filet mignon for an additional $21 or a 16-ounce prime rib-eye for an additional $25. You can also add enhancements like blue cheese topping ($5) or a lobster tail ($23) to any entree. A VIP cocktail is $15.50 and featured bottles of wine range from $10 to $20.

In past years, vegetarian offerings have been disappointing, or worse, nonexistent. This year is different: 16 restaurants offer vegetarian entrees. Many are pastas without meat, while quite a few are vegetable-forward meals.

If you’re not a meat-eater, you might choose to eat at 3 Eleven Kitchen and Cocktails in the West End. Their menu specifies two vegetarian choices in addition to three other entree options. Penne pasta is served with sun-dried tomato marina, broccoli and shaved Parmesan, while a seasonal harvest menu item includes roasted cauliflower and broccoli, Brussels sprouts, red onions, crostini, grilled naan bread and garlic and pepper hummus.

At Rise, you can enjoy a cauliflower and brie soufflé or a mushroom soufflé, while Monica’s Mex Tex offers curry tofu tostadas. At Stirr, avocado hummus is a second-course option while veggie fried rice is offered as a third course.

Vegetarian options are also offered at Sloane’s Corner, Fachini, 400 Gradi, The Mansion on Turtle Creek Restaurant, all the restaurants at Eataly, Moxies, and Yardbird, plus Twigs and Windmills in The Colony as well as Bonnell’s and Wicked Butcher in Fort Worth. This is quite an accomplishment for an event where filet mignon has long dominated the menu.

Menu options now include a larger variety of proteins, but if you still want to eat filet mignon, you’ll still have plenty of options. Consider Dee Lincoln Prime and Arthurs in Dallas, Randy’s Steakhouse in Frisco, Mac’s on Main in Grapevine and Mercury Chophouse and Melting Pot in Arlington.

Many of these restaurants offer other steak cuts, and while we weren't able to verify the menus at Lawry’s, Morton’s or Nick and Sam’s, you can count on some good steaks there, too.

There’s a lot mentioned here, but if you still haven’t seen a dish that tempts you, spend a little time browsing the menus listed on the DFW Restaurant Week website. Dining during restaurant week will definitely pay off for a local charity, and it will most likely be a treat for your tastebuds.
KEEP THE DALLAS OBSERVER FREE... Since we started the Dallas Observer, it has been defined as the free, independent voice of Dallas, and we'd like to keep it that way. With local media under siege, it's more important than ever for us to rally support behind funding our local journalism. You can help by participating in our "I Support" program, allowing us to keep offering readers access to our incisive coverage of local news, food and culture with no paywalls.
Make a one-time donation today for as little as $1.