Not far from Richardson's Chinatown, you'll find a small cluster of Iraqi-owned businesses like Bilad Bakery and Restaurant, a grocery that serves casual and flavorful Middle Eastern fare. Kathy Tran
Richardson is a real melting pot, one of the most diverse places in North Texas to live and eat. Not too far from the Bollywood theater and Vietnamese pho houses, only a few blocks south of Richardson’s Chinatown, is a small cluster of Iraqi-owned businesses serving up affordable specialties from the Fertile Crescent.

The biggest and most established of these Iraqi eateries is Bilad Bakery and Restaurant, which in five years of operation has blossomed into a favorite neighborhood spot. There are two front doors; choose the left door to enter the restaurant area and the right to enter a small grocery store.

The grocery stocks Middle Eastern specialty goods, including shelves of spices and spice blends plus a beautiful selection of cheeses — creamy Danish feta, nutty kashkaval, yogurt-based labneh, smoky and easily melted akawi and more. Need to season kebab meat? Bilad has a good spice mix for that. Need a huge bag of Turkish tea? They’ve got that too.

There are also some more universal grocery staples, including good imported olive oil, tinned anchovies and locally baked desserts. Just be warned that some items, including pomegranate molasses and “pickled midget cucumbers,” bear no price tags, even on the shelves.

Behind both sides of the public operation is Bilad’s bakery, where Iraqi breads are made fresh constantly, including the circular pita familiar to American diners and a wider, longer version, which Bilad calls “Iraqi bread,” where the two ends are pinched into points. The baked goods are available bagged in the market and used to make sandwiches in the restaurant. (Four loaves of Iraqi bread cost $2.49, an absolute steal for the size and quality.)

Beef shawarma on Iraqi bread at Bilad.
Kathy Tran
Bilad builds darn good sandwiches, too ($5.49 with meat, $3.99 with falafel). Beef shawarma straight off the spit is well-seasoned and juicy, and it plays well with Bilad’s mix of pickles, tomatoes and green bell peppers. The falafel is also satisfying and paired with crisp veggies, although in both cases the well-made bread, crisp on the outside and pillowy within, steals the show.

In fact, the “Iraqi bread,” traditionally called samoon, with its endpoint knots of dough and its thicker build, is extraordinary. It’s served hot and the inside is soft, perfectly baked and perfect for scooping up sauces and dips. Think of a cross between pita and ciabatta. This is some of the best bread in Dallas, period.

For a satisfying group dinner, start with the sample platter of appetizer dips and salads. Bilad’s hummus is creamy, garlicky and excellent, its tabbouleh fresh. There are two eggplant dips, a superb smoky baba ghannouj and another which differs by still having large chunks of the vegetable mixed in. Red cabbage salad probably makes the most striking impression on the appetizer plate: The dressing is bright purple, the color of exactly no other food on the face of the earth. No menu price is listed for this platter, but we were charged about $10. Another dish with unusual color is the bowl of Iraqi pickles ($3) including cornichons that have been turned deep, dark red. 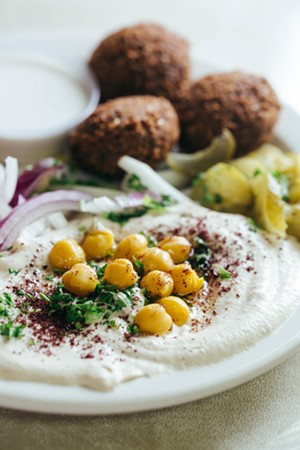 Bilad's falafel and hummus platter.
Kathy Tran
Main course platters (meat platters $11.99, others $5.99) lean on the restaurant’s good beef and chicken shawarma, which arrive in generous quantities along with hummus, onions, a hearty shake of sumac and enough pita bread to make a flock of sandwiches. A little plastic cup carries the restaurant’s bold red zhug, a paste of chili peppers which adds concentrated, acidic, addictive heat to every bite it graces.

The Iraqi kabob platter showcases logs of ground meat seasoned and cooked perfectly; the kabob will look as if it’s prepared well-done, but tastes no worse or less juicy for it. Sumac, the brightly lemony purple spice which many Americans confuse with the poisonous variety, makes another appearance as a generous garnish.

An extra word is in order about a condiment little-known to Americans which, like the fiery chilies of zhug, can grab a lot of attention at Bilad. This is amba, a dip that arrives on the falafel-and-amba platter. It tastes like something right next-door to familiar, like a familiar tune whose name slips from the memory.

Amba, it turns out, is a mango sauce, but without a hint of sweetness. That’s thanks to vinegar, mustard seed and spice; in fact, it’s a little like a sugar-free mango ketchup. Amba sounds odder than it tastes; indeed, on a falafel sandwich with plenty of onions, parsley, tomatoes and zhug, it tastes absolutely divine.

Savory turnovers are sometimes available for takeaway; Bilad calls the triangles of folded dough “pies,” but that name might mislead American customers. The vegetable version ($1.99) brings to mind a different kind of pie: Filled with tomatoes, olives and cheese, it tastes exactly like a good pan pizza.

Another takeout option might be even more enticing: dessert. We tried a sampling of five, ranging from baklava (well-layered, not too nutty and not overly sweet) to kunafa, the oddly orange, oddly addictive dessert made from shredded wheat and molten cheese. All were good, some more than others. A particular favorite was the pistachio puffs with upturned phyllo dough corners. (Kunafa is $4, and all other pastries $1 per piece.) 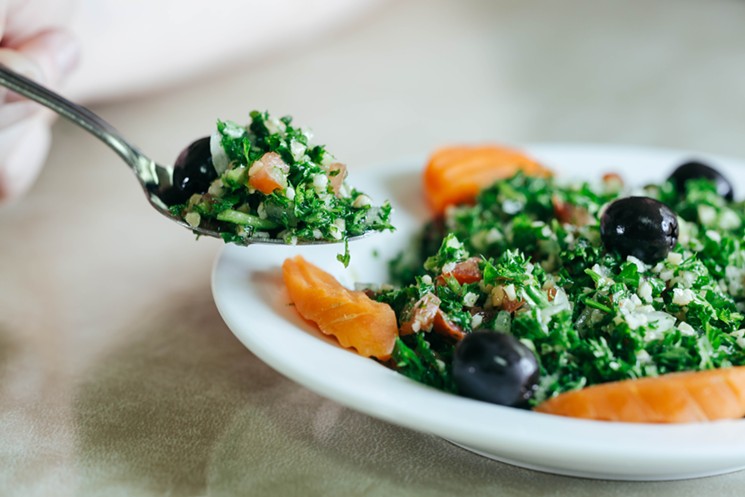 A little tabbouleh never hurt anybody.
Kathy Tran
Bilad Bakery and Restaurant’s food is fresh and bounteous even on slow Monday nights, but its service can be chaotic. Sometimes customers order at the table and sometimes at the counter, with no clear explanation of which rule is in effect at any point in time. Lunches are busy, but one evening, the staff completely left the dining room; the only people in the building, it appeared, were a food critic and a small child waiting for her mom’s shift to end.

But as aloof as the staff might be at times (the restaurant dodged or maybe-latered a half-dozen Observer interview requests), Bilad has become something of a Richardson neighborhood institution. We couldn’t help noticing the diversity of the clientele, and also their loyalty: The first time I stepped inside, a man waiting in line turned and said, “Everything here is great.” A nose for publicity might be good, but happy customers are better.