Photo by Angelica Reyes on Unsplash
The Starbucks secret menu isn’t so much of a secret menu. It's more of a subculture. Social media has been cultivating different ways to customize drinks at Starbucks since the early days of Tumblr, tinkering like mad scientists to create the sweetest, most calorie-dense blended monstrosities possible. Ever since TikTok made even more of these combos viral and accessible, Starbucks baristas are at their wit's end.

With TikTok, it's easier than ever to come across a new way to switch up your order, but with the ‘starbuckssecretmenu’ tag amassing 176.3 million views on TikTok, there’s no limit to what you can order. Some drinks are simple like “The Gummy Bear Drink,” which is just lemonade with raspberry syrup. Others like the “Andes Mint Cold Brew” can get more complicated since it's a venti cold brew, three pumps of mocha sauce, three pumps of white mocha sauce and two pumps of peppermint syrup and topped with cold foam and chocolate shavings.

Some drinks have gotten so popular that Starbucks integrated them into the menu, like “The Pink Drink.” But the more complicated the drink, the longer it takes to create.

“A lot of our performance reviews are based on times and customers per half hour and the TikTok drinks are really time-consuming,” said McKenna Ferrell, a Starbucks barista. “Most of the time I don’t care at all, I think it’s fun as long as everybody stays understanding of inventory limitations and barista capacity.”

The customizability of Starbucks drinks has come a long way since the chain was first founded in the '70s. More than 50% of beverages purchased at Starbucks are cold drinks, according to former Starbucks CEO Kevin Johnson, a drastic evolution from a company that originally only sold coffee beans.

“We have over 170,000 ways that you can customize beverages at Starbucks,” said Alli Colzani, senior account supervisor with the public relations firm Edelman, which handles Starbucks. “There are many ways for customers to modify their favorite beverage, and most customizations are reasonable requests from customers; 75% of customized beverages at Starbucks have fewer than three unique modifications.” 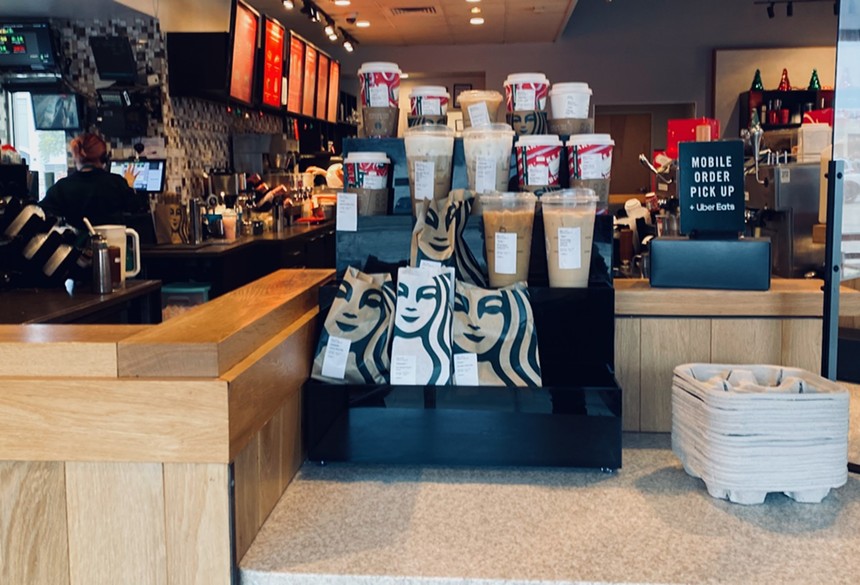 If after sitting for 10 minutes it separates into seven layers, it might not be a coffee.
Lauren Drewes Daniels
Ferrell wasn’t the only Starbuck barista we talked with. In a Facebook group called “that’s it, i’m drinkshaming,” many baristas expressed to us their annoyance with these viral drinks, but many attributed that frustration to the customers more than the drinks.

“Honestly, I don’t mind it if they’re willing to explain what’s in the drink. It’s when people repeat names like the ‘mean girl drink’ and don’t elaborate that I get frustrated,” said Adena Stevens. “I do feel like a lot of these customers look down on us in a way, they are always the first ones to berate me over a drink being slightly off. All in all, if they’re polite I don’t mind the TikTok drinks.”

“I’ve had people walk me through the steps of how to make a Frappuccino because that’s how the IG post said to order it,” said Britni, who requested her last name not be used. “If you go into these ‘Starbucks secret menu’ groups, it’s horrible how much these customers look down on us.”

“While all the fancy labor-intensive drinks slowed down drive-thru times, if you were polite I had no issue making anything you asked,” said a barista who requested anonymity. “My job is to create whatever you wanted to the best of my ability. However, the customer’s job is to treat us like human beings and not coffee-making emotionless robots.”

“My job is to create whatever you wanted to the best of my ability. However, the customer’s job is to treat us like human beings and not coffee making emotionless robots.” - Starbucks Barista

If all of this sounds like Starbucks baristas don’t want to do their job, that is not at all the case. The baristas we chatted with spoke favorably of their jobs, but they often felt underpaid and undervalued by customers and Starbucks.

“There’s no additional support or pay or remodeling of the business model to support this shift,” Britni said.
KEEP THE DALLAS OBSERVER FREE... Since we started the Dallas Observer, it has been defined as the free, independent voice of Dallas, and we'd like to keep it that way. With local media under siege, it's more important than ever for us to rally support behind funding our local journalism. You can help by participating in our "I Support" program, allowing us to keep offering readers access to our incisive coverage of local news, food and culture with no paywalls.
Make a one-time donation today for as little as $1.