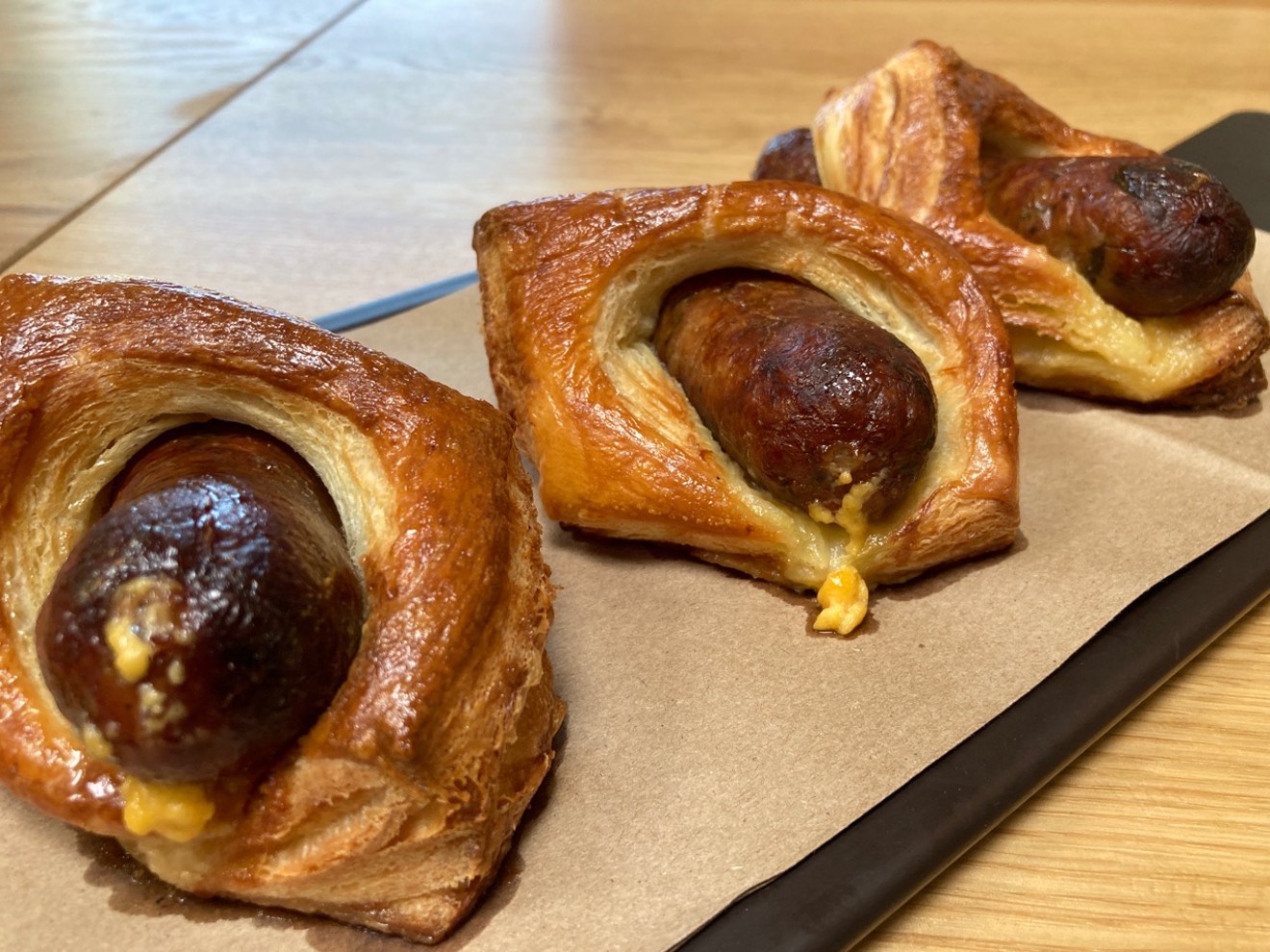 The $6 smoked sausage kolache at Brown Bag Provisions. Nick Rallo
It’s that time of year again when the leaves redden, the pumpkins sleep on the porches, and you, all besweatered, warm your hands by the box of klobasneks in your passenger seat.

“Want them warmed?” is a question Texans should know already — it means your bouquet of sausage rolls, your puffy klobasneks, each pillowy thing with a sausage napping inside, is going to get microwaved. It does a little twist in there for a while, the microwave dings, and the aroma of dough and salty pork wraps around you like a bad Christmas sweater. It’s the time of year when you can stock up Texas’ ultimate, inexpensive, iconic-Texas road meal: It’s klobasnek saving time.

Many doughnut shops offer them around here — they’re cooked early and often with those industrial bulk sausages with the bronze grease. Take, for example, the joy of the open-air drive-thru of USA Donuts & Croissants on Gaston Avenue in East Dallas. The classic doughnut shop is both intensely un-updated-since-the-'80s and perfectly ageless. They open long before dawn, when the street lights are still confusing moths at 5 in the morning. The aroma is pink frosting and coffee and Borden’s chocolate milk.

You’ll get a handful of glazed doughnut holes with your under-10-buck dozen of sausage rolls. USA Donuts is just one joint to get the old-school, doughnut shop kolaches. The rest in the list take klobasneks a step further. 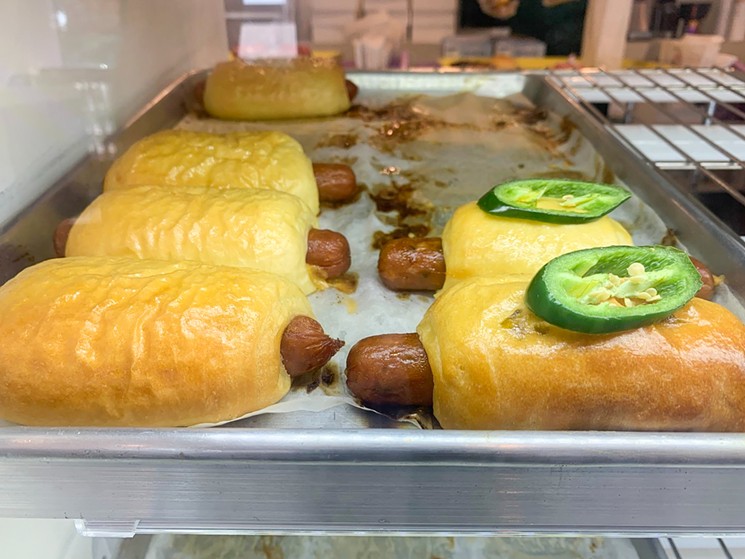 The last of the jumbo jalapeno sausages at Jarams Donuts.
Nick Rallo
The Sausage Rolls at Jarams Donuts
2117 Abrams Road (Lakewood)
They’ve stayed open throughout the pandemic. Stickers mark the floors like a human board game’s underway — show up on a Friday morning and every circle will be occupied. Why? It’s the crystal clear jelly doughnuts and the sugar skulls, sure, but go savory next time: Their klobasneks have snap, a cut above the average Lil Smokie, and ribbons of yellow cheese swirl through the chewy, just-a-little-sweet dough. When fresh out of the oven (or the microwave), they’re an extraordinary way to spend a couple of bucks. You won’t need many: One or two fill you up for a long haul of a morning, and each costs less than a gallon of gas these days. Or grab a dozen, splitting up croissants and the jumbo options with jalapeño coins.

The Sausage and Cheddar at Leila Bakery & Cafe
Leila Bakery and Cafe, 6041 Oram St. (East Dallas)
The sausage cracks open inside the crusty roll, and there’s the rush of pepper and salt. Cheddar, a lot of it, has melted into the walls of the dough so it eclipses every bite. This is the four-buck, baseball-sized “kolache” at Leila, the little bakery with the twisty breads and roasted garlic croutons. The ham and Muenster is another gem: Plenty of ribboned, good ham and even-keeled melty white cheese are perfect, four-buck snacks.

“His laminate is absolutely incredible. When baked I would swear that there are 1,000 layers,” says Brown Bag co-owner Brent Gilewicz. 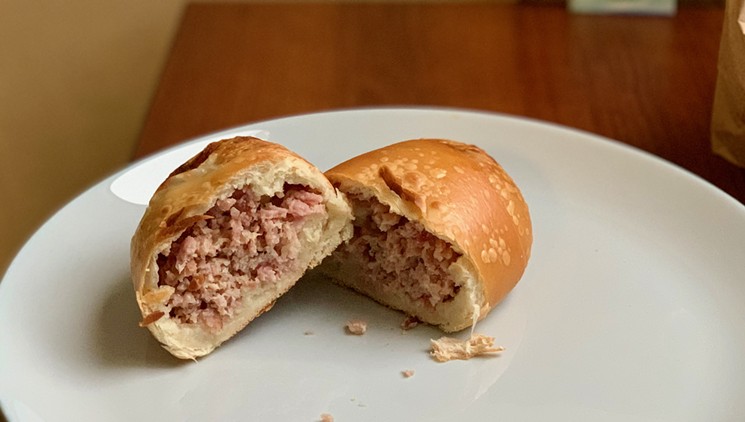 The cachito de jamon from Zaguan.
Taylor Adams
The Venezuelan Version: The Ham and Cheese Cachito at Zaguan
2604 Oak Lawn Ave. (Oak Lawn)
What is a cachito de jamon? I’s a buttery-crusty shell loaded with chopped ham and cheese. It’s the Venezuelan sibling to the klobasnek. Inside this gemstone from Zaguan, which recently celebrated its 20th birthday on Oak Lawn, is that salty core of finely minced pork fused with Paisa cheese. Take, bag, and go — it’s a handheld meal. It’s as portable as a paperback. Get it warmed, like the best klobasneks, so that clean and breezy queso blanco melts right into the walls.
KEEP THE DALLAS OBSERVER FREE... Since we started the Dallas Observer, it has been defined as the free, independent voice of Dallas, and we'd like to keep it that way. With local media under siege, it's more important than ever for us to rally support behind funding our local journalism. You can help by participating in our "I Support" program, allowing us to keep offering readers access to our incisive coverage of local news, food and culture with no paywalls.
Make a one-time donation today for as little as $1.
Nick Rallo
Contact: Nick Rallo