Fish Bone Grill Has Been Serving the Same Gumbo Recipe for 35 Years, and for Good Reason Bill Hensley, 77, owner of Fish Bone Grill Taylor Danser
All-American is a series that looks at beloved, longstanding North Texas eateries and examines their history while exploring how the food has changed — for the good or bad — over the years.

That’s a lot of visits, even if he is the owner of the place.

“We opened in 1983 with a lot of success, and the thing that made us unique at that time in this market is that we were an oyster bar,” Hensley, 77, says. “You could get some fresh oysters. You could get all the good things you can get on the coast. Back then we didn’t have the grilled fish, but we had the fried fish, gumbo, chowder, those kinds of things. We still have that gumbo recipe ... and it is fantastic.”

He’ll go beyond that to say the gumbo’s the best in the country. While that’s not confirmed, a taste of it helps explain why the place in Medallion Center is still around after three decades. 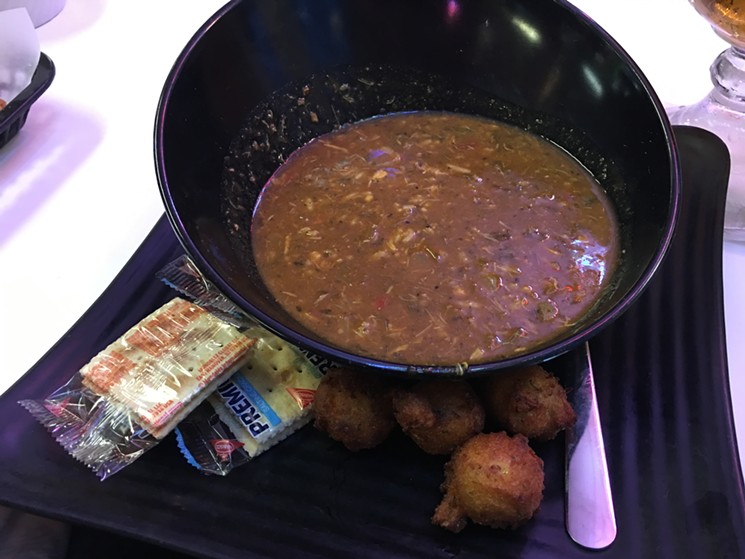 The oysters are shucked behind the bar’s counter, not far from a small, free-standing freezer. All that appears to ever come out of it are frosted schooner glasses, and you'd be hard-pressed to find a colder draft beer in all of Dallas.

At night, tabletops reflect the neon from the signs on every wall. You choose your own seat and make yourself comfortable on a booth cushion that may be taped together. You might not call the service warm and fuzzy, but it’s generally accurate and fast.

Fish Bone doesn’t have a “type” of regular; this small restaurant in a strip mall at Abrams Road and Northwest Highway serves as a melting pot while its cooks fry up superior hush puppies.

Much of that could be its location in an area that’s had a bit of a face lift lately. 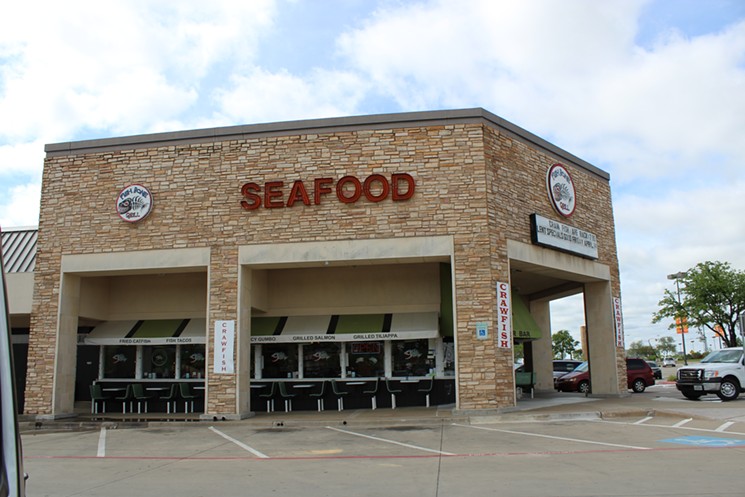 Fish Bone Grill is an anchor of Medallion Center.
Taylor Danser
“It’s changed considerably. All the apartments back there have been torn down. They’ve got all new apartments. These apartments over here, they just refurbished these,” he says, noting the multi-family living development to the south of Medallion Center. “At Northwest Highway, they extended the Village. In commercial, you’ve got your Sam’s and Wal-Mart up here.”

And it’s all been good for business, which you can tell if you visit on a Saturday night. Sales are up, Hensley says. This location of Fish Bone hasn’t been Hensley’s only venture.

“I started the Oyster Cracker restaurant on North Collins one year before here, and we were just a seafood oyster bar kind of setting. ... After having the success with the one in Arlington, I thought, ‘Well shit, why doesn’t everyone open a restaurant? This is good,’” he says.

That’s when he expanded the menu and moved east to open Fish Bone Grill — then eight other spots.

“At one time we had 10 franchise locations,” he says. “For whatever the reasons, the economy, whatever, we ended up closing eight of them, then the original one we had in Arlington — I sold that about five years ago.”

Fried shrimp served as it should be: with french fries in a greasy, paper-lined basket.
Taylor Danser
Thankfully, Northeast Dallas’ Fish Bone Grills keeps its doors open — and it should stay that way for at least five more years with the recent lease he signed.

And they’ve come a ways since opening up to serve fried seafood. For one, they started with a counter order: After seeing the line go out the doors and wrap around the side of the building, they moved to the sit-down model. The menu also took on some Cajun and Mexican flavors.

“There was a guy that I brought in originally. … After we got going, he said, ‘I’ve got a gumbo recipe, why don’t we give it a try?’ and I said, ‘Well, let’s crank it up.’ We did the gumbo for about two months, then I told Jimmy, you’ve got to sell me the recipe.

They later brought in étouffée, and in the last four years or so, they started serving caldo, a Mexican fish soup that’s proving popular with customers. Hensley's Mexican shrimp cocktail, with its slightly sweet and proudly spicy sauce, really is one of the best ways to experience shrimp. It's a casual spot, but the seafood is fresh and the history is definitely there.
Taylor Danser
After more than 30 years in business, the Fish Bone Grill runs well. Employees know how things work, and customers know what they’re going to get when they order. Yet you’ll still see Hensley walk in, check the thermostat, say hello to every table, then take his place behind the cash register at the counter near the door.

“It always is good to be here,” he says. “A lot of my time is spent on the cash register, and my question to every customer is, ‘Everything good today?’ and everybody says yes. I found that you don’t want to ask a customer, ‘Was there anything wrong?’ because they’re going to think of something wrong. ‘Everything’s good?’ And they say, ‘Everything’s good,’ and they smile and they come back and see us.”