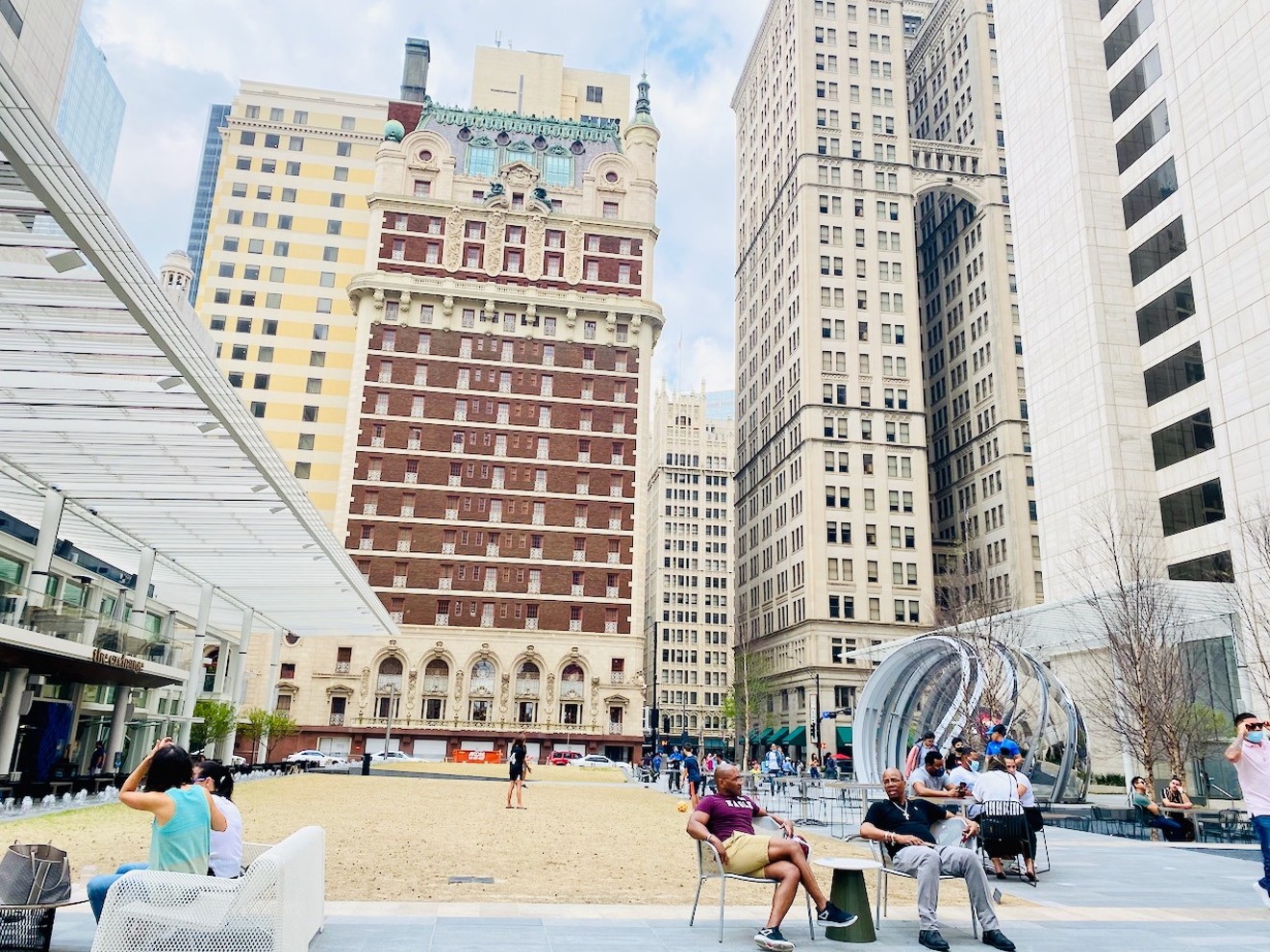 The Exchange food hall is to the left of the large plaza. They'll be welcoming some new local vendors this summer. Lauren Drewes Daniels
The Exchange, a large food hall at AT&T Discovery District in downtown that opened last year, is moving some concepts around and welcoming a two big-name local chefs for a summer refresh.

The Exchange is filled with local food vendors like The Dock, Zalat, Revolver Taco, Baboushi and Rise and Thyme. The food hall flanks a large outdoor plaza with art installations, water features and turf used for yoga or naps. A huge media wall sits overhead, sometimes playing a loop of colors and movements and other times a game or movie. It's a nice place to take out-of-towners or to kill some time at lunch or a nice weekend.

James Beard-nominated chef Misti Norris of Petra and the Beast will be the first in a new rotating chef concept on the second floor of The Exchange. Morris' restaurant, Stepchild, will be open from June through July serving dinner Thursday through Sunday. As soon as we have more details on this space, we'll let you know.

Ichi Ni San, which was upstairs, will move downstairs as a rebranded concept, Ichi, serving poke bowls and sushi.

The mini-burger concept, Easy Slider, will open on the first floor of The Exchange, where Bobber's and Whips used to be. Easy Slider first started as a food truck in 2011 and expanded to Deep Ellum and Harvest Hall in Grapevine, and now The Exchange. The menu includes their inventive sliders, like the Sweet and Lowdown: certified Angus beef topped with goat cheese, strawberry jam and bacon.

Bobbers and Whips will move into "The Shack at JAXON" near the restaurant and bar JAXON, which is adjacent to the food hall. We're quite partial to Bobbers' pimento cheeseburger. They also serve hotdogs from local brand Luscher's Post Oak Red Hots and the Disneyland-inspired treat, Dole Whip. Birdie will serve chicken tenders and sandwiches, influenced by the south, Korea and Japan.
Birdie
Birdie is a new concept moving into The Exchange from chef Josh Harmon, previously of Junction Craft Kitchen. Birdie will have Southern, Korean and Japanese-inspired fried chicken tenders and sandwiches all with house-made sauces. Sides include a Hawaiian-style macaroni salad, Harmon's grandmother's recipe, and a warm potato salad that was featured on the Food Network.

Birdie will open May 23 and Easy Slider is set to open June 1.
KEEP THE DALLAS OBSERVER FREE... Since we started the Dallas Observer, it has been defined as the free, independent voice of Dallas, and we'd like to keep it that way. With local media under siege, it's more important than ever for us to rally support behind funding our local journalism. You can help by participating in our "I Support" program, allowing us to keep offering readers access to our incisive coverage of local news, food and culture with no paywalls.
Make a one-time donation today for as little as $1.