BrainDead Brewing Has Tapped Out 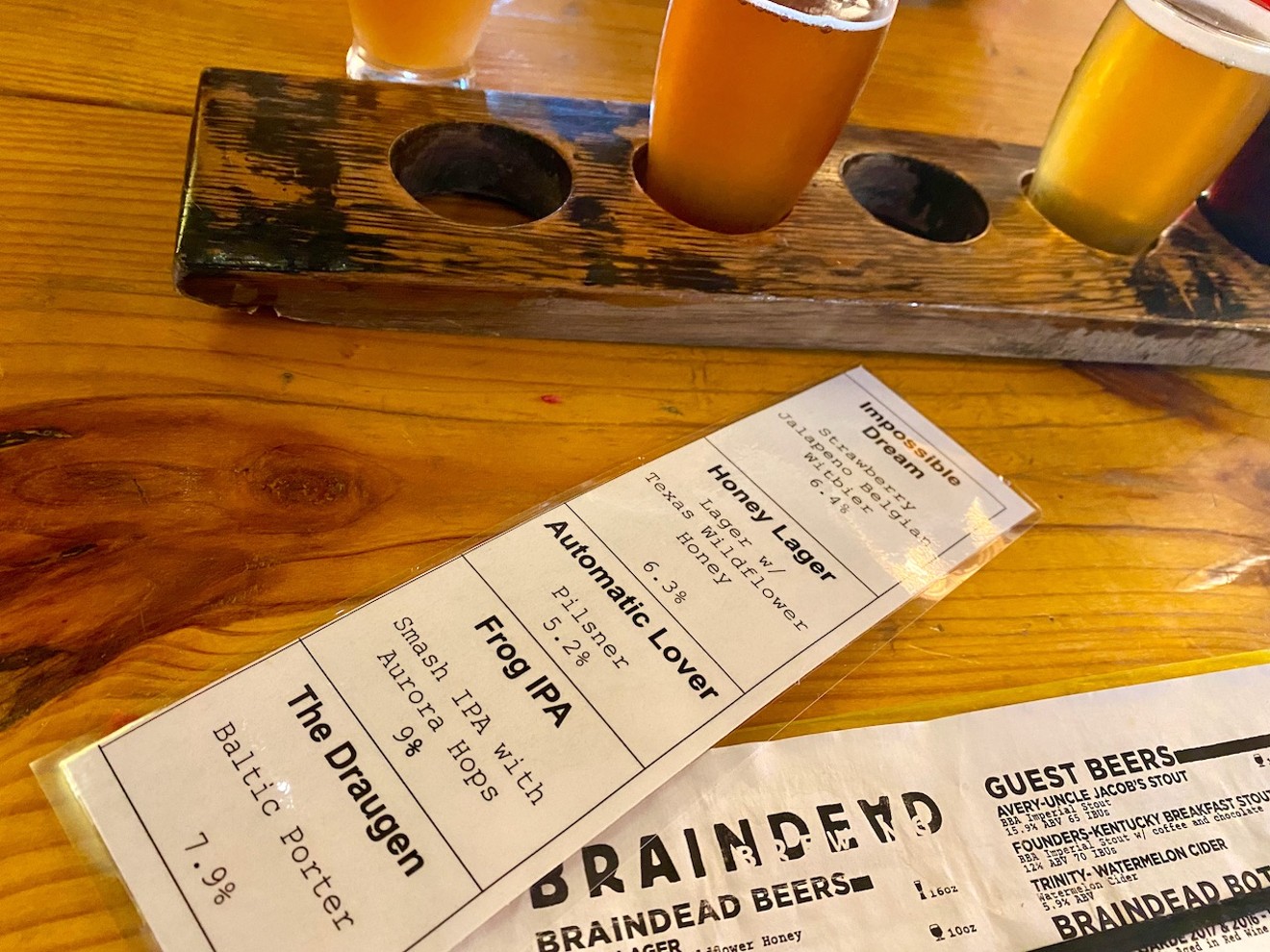 A flight from BrainDead late this summer. Lauren Drewes Daniels
(Update Nov. 29: An earlier version of this article stated that Sam Wynne was associated with several restaurants, which he was not. Also, we've clarified that BrainDead did offer beer to go via growlers.)

BrainDead Brewing, which opened in Deep Ellum seven years ago, posted a note on its Facebook page last Friday stating that this was their "last weekend of business."


This will be our last weekend of business.
We are thankful for everyone that supported us through almost 7 years of brewpubbing in Deep Ellum, the best neighborhood there ever was.
Come out for some grub and one last pint before we close the doors Sunday night. Our big homie Leo J will be jammin the tunes. Follow him. Go to his shows. Give him love.
Our small staff will be working hard all weekend so please tip what you can and buy some beers for the cooks.
Again, we appreciate every person that has ever walked in our doors and given us any of your time and hard earned money. We’re sorry that we gotta go but we love you and wish you the best!


The spot was backed by Sam Wynne, who developed his knowledge of craft beer through working at The Flying Saucer; he later became a beer cicerone. He started BrainDead with Jeff Fryman. They hired brewer Andrew Huerter, who had been at Deep Ellum Brewing Co. They arrived in Deep Ellum on the cusp of the local craft brewing scene.

BrainDead Brewing was technically a brewpub; they made their own and offered taps to other craft brewers, plus they had a solid kitchen and offered beer to go via growlers.

The business outlook started to dim in September 2020 when they posted they would reopen for takeout service after they'd been closed because of the pandemic; Wynne countered on his own Facebook page that BrainDead was out of money and the landlords were supposed to have already locked Fryman and team out. Eater has all the deets on that odd airing of laundry.

No official word on why they've shuttered.
KEEP THE DALLAS OBSERVER FREE... Since we started the Dallas Observer, it has been defined as the free, independent voice of Dallas, and we'd like to keep it that way. With local media under siege, it's more important than ever for us to rally support behind funding our local journalism. You can help by participating in our "I Support" program, allowing us to keep offering readers access to our incisive coverage of local news, food and culture with no paywalls.
Make a one-time donation today for as little as $1.