What Makes Smithy’s Brunch Worth the Wait 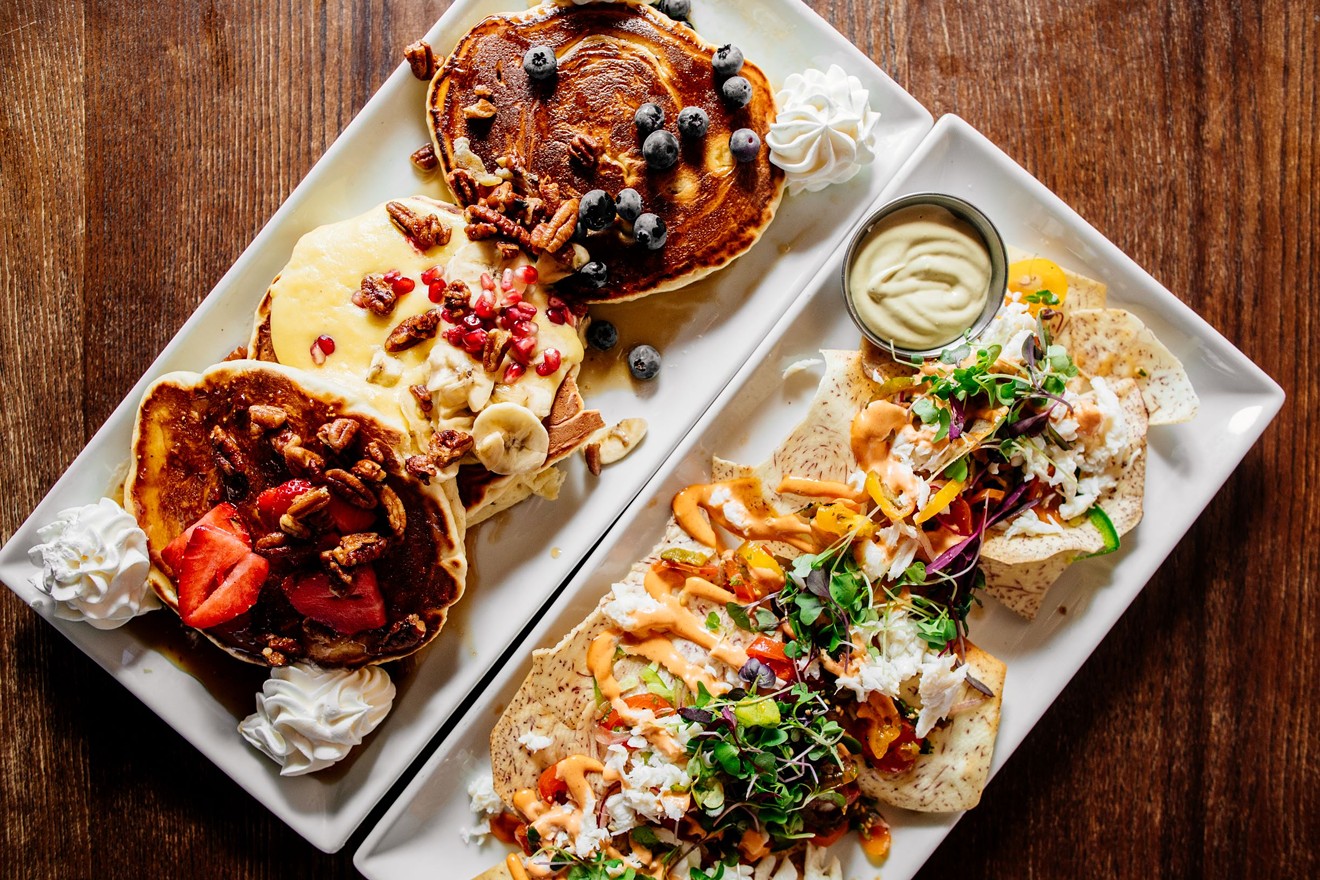 Japanese cakes and crab nachos Kathy Tran
Brunch is a slow thing, sometimes taking up a sizable portion of your weekend morning as you sip drinks and chat with friends over a few eggs or something sweet.

Brunch is the epitome of “taking it easy,” but to reach that lovely state of mind at Smithy on Henderson, be prepared to wait.

With free valet, a cute atmosphere and cheap drinks, it's no surprise that even though we arrived just after opening, we were given the option of a 30-minute wait for an indoor table, or to be seated immediately outside.

We chose the latter, which was surprisingly comfortable due to two massive patio coolers working their hardest to keep the outdoor diners from shriveling in the heat.

It's fortunate the seating was so comfortable, as we waited 20 minutes before we received our menus. There were menus, as evidenced by a full stack of them at the entrance, but they were seemingly not given out freely as a way to ensure each table had a waiter before any guests could even think about ordering food.

It's a little ham-fisted way of crowd control, but considering the alternative is waiting for the same amount of time while salivating over all the delicious sounding items on the menu, I’ll give it a pass.

The brunch menu is a bit polarized. One’s choices either swing toward a healthy, green style of living or a live-fast-die-young mentality, where excess is the expected. We decided to go with two indulgent choices and one healthy.

For just four bucks, the watermelon mimosa is only weakly watermelon flavored — like a single Jolly Rancher was dissolved in a bottle of bubbly. But there isn’t much complaint in being served “too much sparkling wine” in a mimosa. 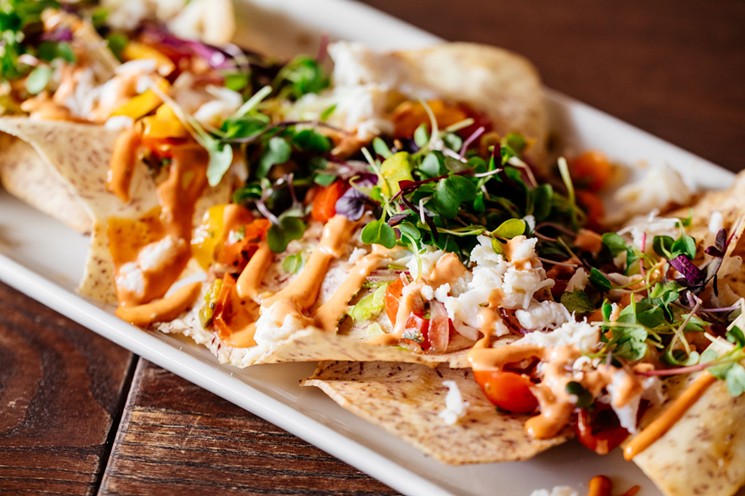 Crab nachos
Kathy Tran
Although we are a little behind the trend of 10-story-tall Japanese pancakes, we ordered them anyway and were blown away ($10).

Three pillowy pancakes are served with an assortment of fruits and topped with coconut nectar (a sweet syrup similar to agave nectar). The center pancake is lovingly coated in a thick vanilla Anglaise, a type of thinned custard.

While these pancakes aren’t as tall as the sky-high souffle ones often used to garner thousands of Instagram likes, they're made with traditional pancake batter that's been folded with whipped egg white.

The resulting texture is closer to that of a normal pancake than that of a souffle, but still whipped enough to give them a delicate, spongy interior that soaks up the syrup with great enthusiasm. A single order could feed two people easily.

While striking in appearance with its cornucopia of colors and textures, it was difficult to eat. Taro chips aren’t as crispy as their corn counterpart but have a lot of surface area. Trying to slam a whole chip piled high with toppings into my face had me mimicking a boa constrictor with an unhinged jaw.

Carefully crafting each bite to make sure this didn’t happen did in fact slow us down, which allowed us to savor each bite more. The flavors are complex and unexpected, with each bite a little different and allowing a new nuance to come through. The pico was fresh and punchy, the crab was tender and sweet, and the avocado butter was luscious.

What makes a dish a “hangover food”? Is it just the presence of an enormous amount of animal flesh, fat and salt?

After all, most places that serve food geared toward this purpose just slap a greasy fried egg on top of something and call it a day. Maybe it's the comfort of enjoying a meal big enough for three people that helps focus the mind away from the onslaught of bleary eyes and pounding headaches. 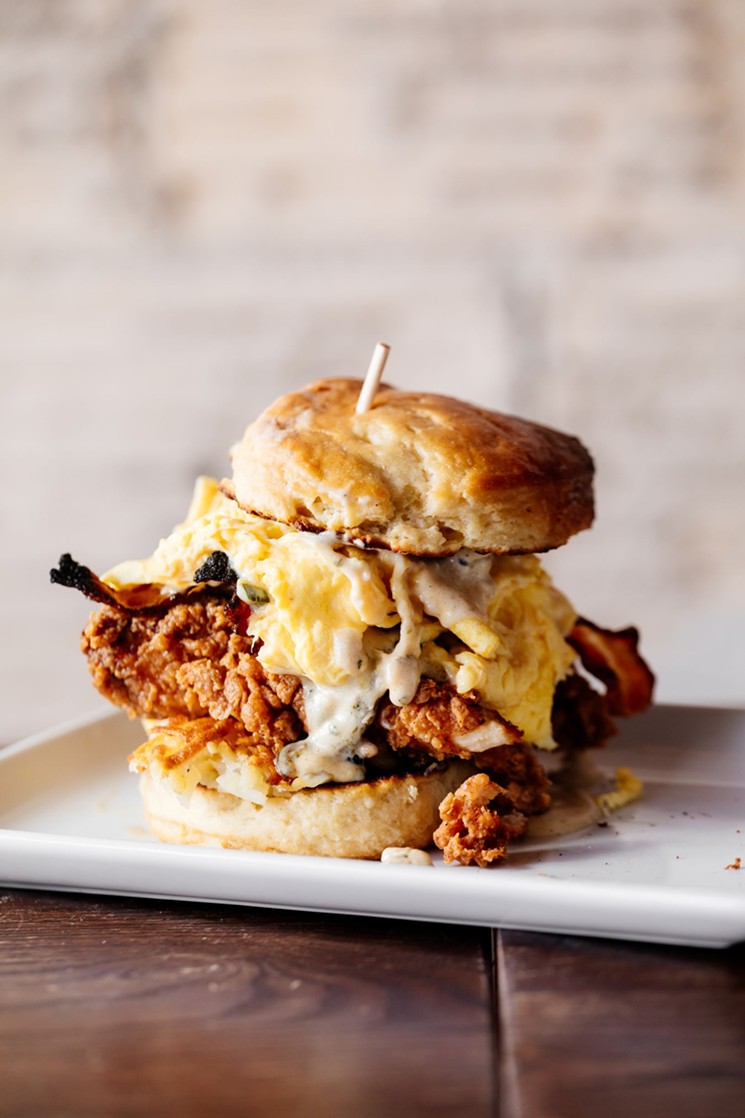 The Hangover 2.0
Kathy Tran
If comfort really is the remedy, then Smithy's the Hangover 2.0 will do the trick ($16). It's a massive mound of biscuit, fried chicken, eggs, sausage, bacon, hash browns, gravy and syrup that is cosplaying a sandwich.

No matter what angle you go at this thing, it's going to collapse into an amalgamation that more closely represents John Carpenter's The Thing than it does a consumable product. It’s damn delicious, though.

Every component of it is made well, and even though putting fried chicken, sausage and bacon right next to each other makes them blend into one uniform explosion, it's a good kind of explosion: flavor. Just close your eyes while eating it.

Smithy’s value is a better one in the Dallas brunch scene. Maybe it's that value that keeps the seats packed from open to close. While every minute waiting was worth it for us, your mileage may vary depending on when you arrive and how long your wait really is.

Personally, I’d wait over an hour to get my hands on those pancakes again.

Smithy on Henderson, 2927 N. Henderson Ave. (Knox-Henderson). 214-225-0580. Brunch served 10 a.m.-2 p.m. Friday; 10 a.m.-3 p.m. Saturday-Sunday.
KEEP THE DALLAS OBSERVER FREE... Since we started the Dallas Observer, it has been defined as the free, independent voice of Dallas, and we'd like to keep it that way. With local media under siege, it's more important than ever for us to rally support behind funding our local journalism. You can help by participating in our "I Support" program, allowing us to keep offering readers access to our incisive coverage of local news, food and culture with no paywalls.
Make a one-time donation today for as little as $1.
Daniel Rockey