We Couldn't Get a Table at Carbone, So We Went to Carbone's (And, Yes, We'll Be Back) Vodka tortellini from Carbone's in Dallas. Accessible, in every sense of the word. Chris Wolfgang
The local food media has found themselves aflutter now that Carbone has opened its doors in Dallas. Eater described the opening as "highly anticipated," and Culture Map suggested that Carbone, along with sister restaurant Sadelle, have taken Dallas by storm. The Dallas Morning News called Carbone "the biggest new restaurant of 2022."  Naturally, we spilled some ink in honor of the opening as well, because not partaking in the madness throws the food journalism universe out of balance, and we can't have that level of guilt weighing on our muffin-top.

With all that press, Carbone must be the end-all-be-all of red-sauce Italian restaurants, right? Truth is, we don't yet know, because getting a reservation is the hardest ask in town. Carbone takes reservations through Resy, but a table for two is booked solid for the next month, which is as far out as Carbone makes them available. If you have a party of three or four, your odds improve somewhat, assuming you're willing to head to dinner at 10 p.m. on a Tuesday and have two to three friends ready to drop $25 on a Caesar salad or $69 for the veal Parmesan.

So we did the next best thing on a Saturday night — we walked into Carbone's and asked for a table for two and were seated right away. Not Carbone. Carbone's. With an apostrophe s. 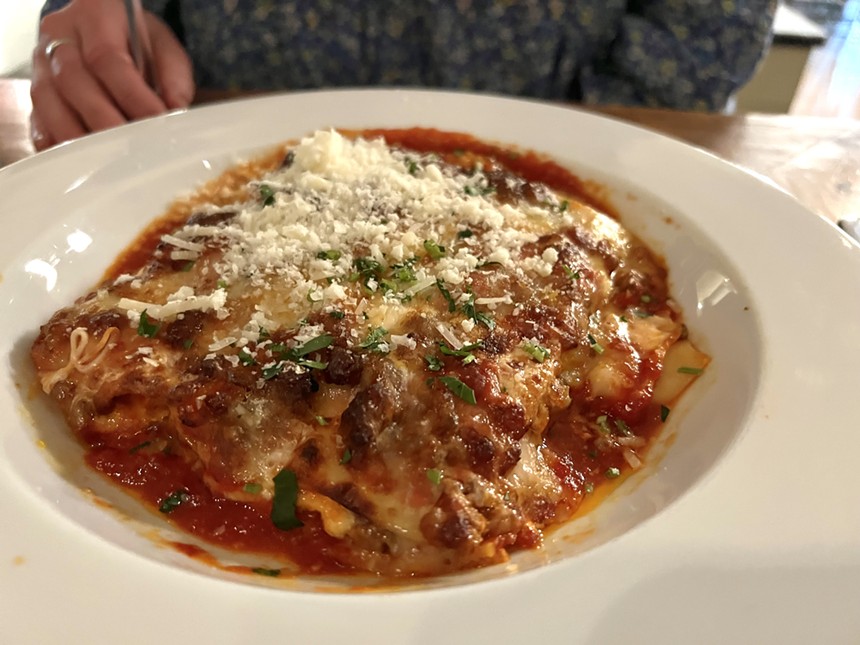 You can taste the hours spent on Carbone's tremendous lasagna Bolognese.
Chris Wolfgang

Local restauranteur and chef Julian Barsotti has already proven his chops in the Dallas dining scene. Barsotti's first Italian venture, Nonna, opened more than 15 years ago and is consistently lauded as one of Dallas' best Italian joints. A decade ago, Barsotti launched Carbone's, a more traditional Italian-American spot named after Carbone's in New Jersey where his grandmother was a co-owner. Barsotti also ran the now-shuttered Sprezza and still operates Fachini in Highland Park Village, should you desire a plate of 100-layer lasagna.

Carbone's feels the most casual and accessible of Barsotti's establishments. It's a small space nestled at the end spot of a shopping center, with solid wood tables, polished concrete floors and double-sided paper menus.

This isn't a formal review of Carbone's, but it's safe to say that we're fans; they've been a fixture on our Top 100 restaurants list (along with Nonna) since we put our first list together in 2018. My dining companion for this visit is newish to Dallas and had never been to Carbone's, so they had to try the fantastic lasagna Bolognese ($20), in which you can almost taste the hours it simmered in the kitchen. Go ahead, find us a better cannoli outside of New York's five boroughs. We'll wait.
Chris Wolfgang
We also got the vodka tortellini, the folds of pasta a perfect al dente morsel to deliver the creamy vodka sauce. It's also a bargain at $22, while the unobtainable vodka rigatoni at Carbone runs $33 (or a 50% premium for you number junkies). Naturally, we saved room for the cannoli, which is a $9 plate of lightly sweet heaven whose equal you would be hard-pressed to find outside of the five boroughs of NYC.

Our waiter confirmed some of our suspicions, saying that Carbone's has been getting a healthy serving of phone calls from people looking for the newcomer spot over in the Design District. Despite being the original Carbone's in town, they've taken to answering the phone as "Carbone's Fine Food And Wine" to cut down on the misinformed callers. We're no lawyers and have no idea how a naming dispute might play out in court. If Barsotti needs a lawyer, we'd suggest he reach out to Andrea Meyer, who recently scored a win of her own in Bisou Bisou's naming dispute, for a recommendation.

Our waiter had also heard the rumors of how expensive Carbone can be assuming you can get a table, even name-dropping the Caesar salad by price. We laughed and mentioned that we would still angle for a reservation at Carbone as soon one becomes available, which encouraged this gem of truth in response.

Carbone's Fine Food & Wine, 4208 Oak Lawn Avenue. Dinner 5:30 p.m. - 9 p.m. Sunday - Thursday, and 5:30 p.m. - 9:30 p.m. Friday - Saturday.  Lunch 11 a.m. - 3 p.m. daily.
KEEP THE DALLAS OBSERVER FREE... Since we started the Dallas Observer, it has been defined as the free, independent voice of Dallas, and we'd like to keep it that way. With local media under siege, it's more important than ever for us to rally support behind funding our local journalism. You can help by participating in our "I Support" program, allowing us to keep offering readers access to our incisive coverage of local news, food and culture with no paywalls.
Make a one-time donation today for as little as $1.