Carbone Dallas
First things first. This is not Carbone's, à la local restauranteur Julian Barsotti, or related to it in any way. But they are both classic Italian spots, and we predict some confusion over the two. Their websites are one simple little sneaky letter different. Regardless, while you're waiting a month for a reservation at the new spot, go to Dallas' original Carbone's and feast on a big slab of lasagna Bolognese.

In the past several years, there hasn’t been a restaurant more anticipated in Dallas than New York red-sauce restaurant Carbone Dallas, which officially opened its doors this week.

Mozz and Peppers
Carbone Dallas
This marks the opening of the fifth location under the world-renowned Carbone brand, with this venue situated comfortably in Dallas’ Design District. Other Carbone locations include Hong Kong, Las Vegas, Miami and its original location in New York. 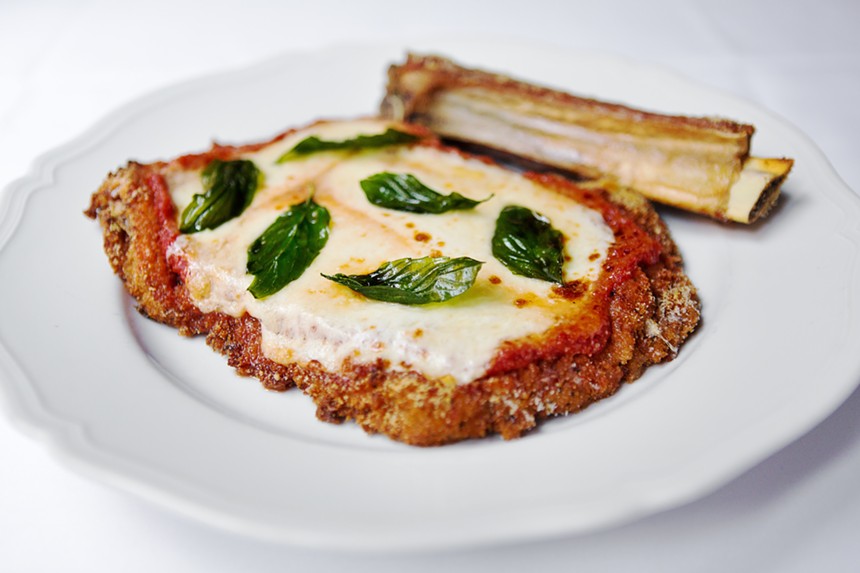 Veal Parmesan
Carbone Dallas
Diners at Carbone can expect big and bold and well-designed plates meant to be shared. Signature dishes include a spicy rigatoni in vodka sauce, a showy tableside Caesar salad “alla ZZ” and veal chop Parmesan served alongside its bone.

Carbone’s press release also touted an “impressive selection” of vintage wines from around the world. Alongside the wine list, the bar serves guests “perfectly executed Manhattans, daiquiris and Gibsons.”

Carrot cake
Carbone Dallas
Photos of the desserts have us looking for reservations, which are already booked solid through April.

Ken Faulk, who the Thrillist asserts "designs the world's most beautiful bars," once again returned to collaborate with MFG for the Carbone’s Dallas location. Inspired by the idea to “merge New York confidence with Venetian opulence and Italy’s finest tradition,” Carbone claims some serious style points for its unapologetic luxury space and service captains clad in custom-designed burgundy suits. Most notable is the inclusion of a private grotto designed by Faulk to be highly intimate and luxuriously over-the-top.

MFG has plans for more expansion, including Carbone Vino next spring, which will open adjacent to the restaurant.

“Carbone was made for Dallas and its dynamic, worldly community,” Zalaznick said. “So it is a thrill to finally share this legendary restaurant with such an extraordinary city—and there’s much more to come.”

Carbone Dallas, 1617 Hi Line Drive, 5-11 p.m. Tuesday - Sunday.
KEEP THE DALLAS OBSERVER FREE... Since we started the Dallas Observer, it has been defined as the free, independent voice of Dallas, and we'd like to keep it that way. With local media under siege, it's more important than ever for us to rally support behind funding our local journalism. You can help by participating in our "I Support" program, allowing us to keep offering readers access to our incisive coverage of local news, food and culture with no paywalls.
Make a one-time donation today for as little as $1.