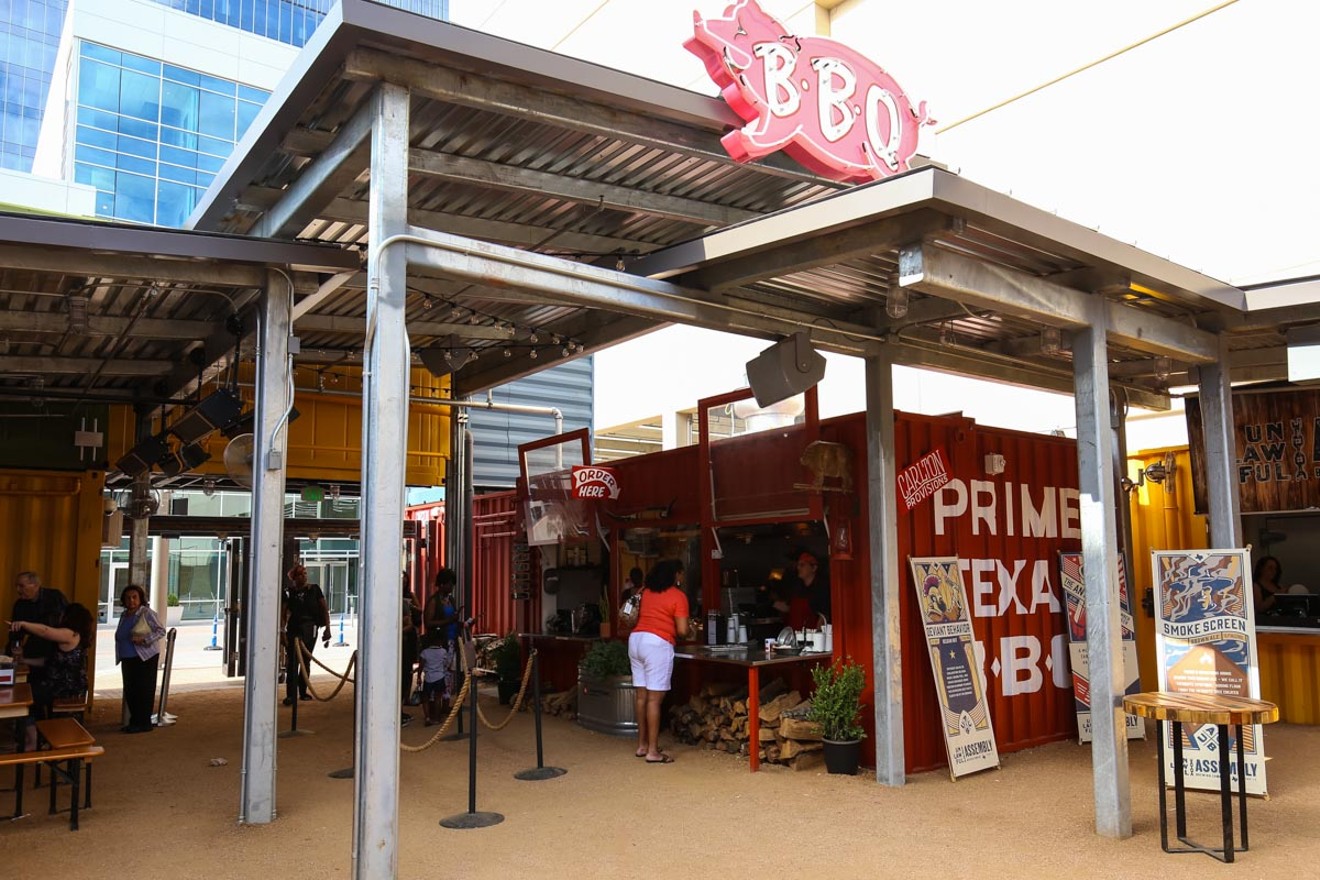 Carlton Provisions occupies one of the many shipping containers in Legacy West's new Box Garden entertainment venue. Chris Wolfgang
The Box Garden, the self-described patio on steroids that's the newest addition to the burgeoning Legacy West development in Plano, opened for business the weekend of May 18, with singer-songwriter Sarah Jaffe headlining the festivities. In addition to being a live entertainment venue, the Box Garden sports several bars and, for lovers of smoked meats, a new barbecue destination called Carlton Provisions.

Carlton Provisions is the lovechild of local catering whiz Jordan Swim of Vestals Catering and Larry Lavine, who started a little restaurant you may have heard of called Chili's. Lavine was responsible for launching Ten50 BBQ in Richardson, so the barbecue cred is already strong. To find out just how strong, we sauntered into the shipping container venue to check it out.

Barbecue as it was meant to be served — outdoors.
Chris Wolfgang
The smell of smoke hit our noses before we got in, which put us in the appropriate mood straight away. Carlton Provisions occupies one of the shipping containers, and patrons order at one window and pick up their orders at the next. Then it's off to any table they can find in the massive Box Garden patio, which appeared well patronized and popular on an opening weekend visit.

Like the restaurant, the menu is minimalistic. Just four meat choices are featured: brisket, turkey, a cheddar-jalapeño sausage and pulled pork. If you prefer your barbecue on a bun, any of the proteins can be ordered as a sandwich, but most people will likely avail themselves of a two-meat ($14) or three-meat ($17) plate, which comes with a side of beans or a mustard-and-vinegar coleslaw. The menu also touts stuffed jalapeños for just two bucks, roasted corn on the cob for $3.50 and an after-5 p.m. special of brisket nachos ($9). Since we rolled up just as the clock struck 5, we had to try the nachos, and we also got a two-meat plate of lean brisket and sausage with slaw. We rounded out our order with the roasted corn, then grabbed a table to dig in.

We imagine that people who try Carlton's slaw will fall in two camps: barbecue purists who hate any attempt to make a staple like coleslaw unique and every else who appreciates the effort. Count us in the second camp; we enjoyed the tanginess of the slaw and unique touches like cucumber and tomato among the crisp cabbage. Meanwhile, the roasted sweet corn was amazing, roasted perfectly, and topped with crema, cojita cheese and seasoning to balance the sweetness of the kernels.

Carlton Provisions breaks no new ground with brisket nachos, but we're still a sucker for them.
Chris Wolfgang
Plan your visits so you arrive when the nachos are served. Admittedly, Carlton Provisions isn't breaking new ground here, but we're suckers for nachos with brisket as the protein of choice. Make sure to dress yours up with the house-pickled onions, then drizzle on CP's tangy barbecue sauce to complete the dish. And wipe your fingers before sending us a thank-you email.

Carlton Provisions at Legacy Hall, 7800 Windrose Ave., Plano
KEEP THE DALLAS OBSERVER FREE... Since we started the Dallas Observer, it has been defined as the free, independent voice of Dallas, and we'd like to keep it that way. With local media under siege, it's more important than ever for us to rally support behind funding our local journalism. You can help by participating in our "I Support" program, allowing us to keep offering readers access to our incisive coverage of local news, food and culture with no paywalls.
Make a one-time donation today for as little as $1.