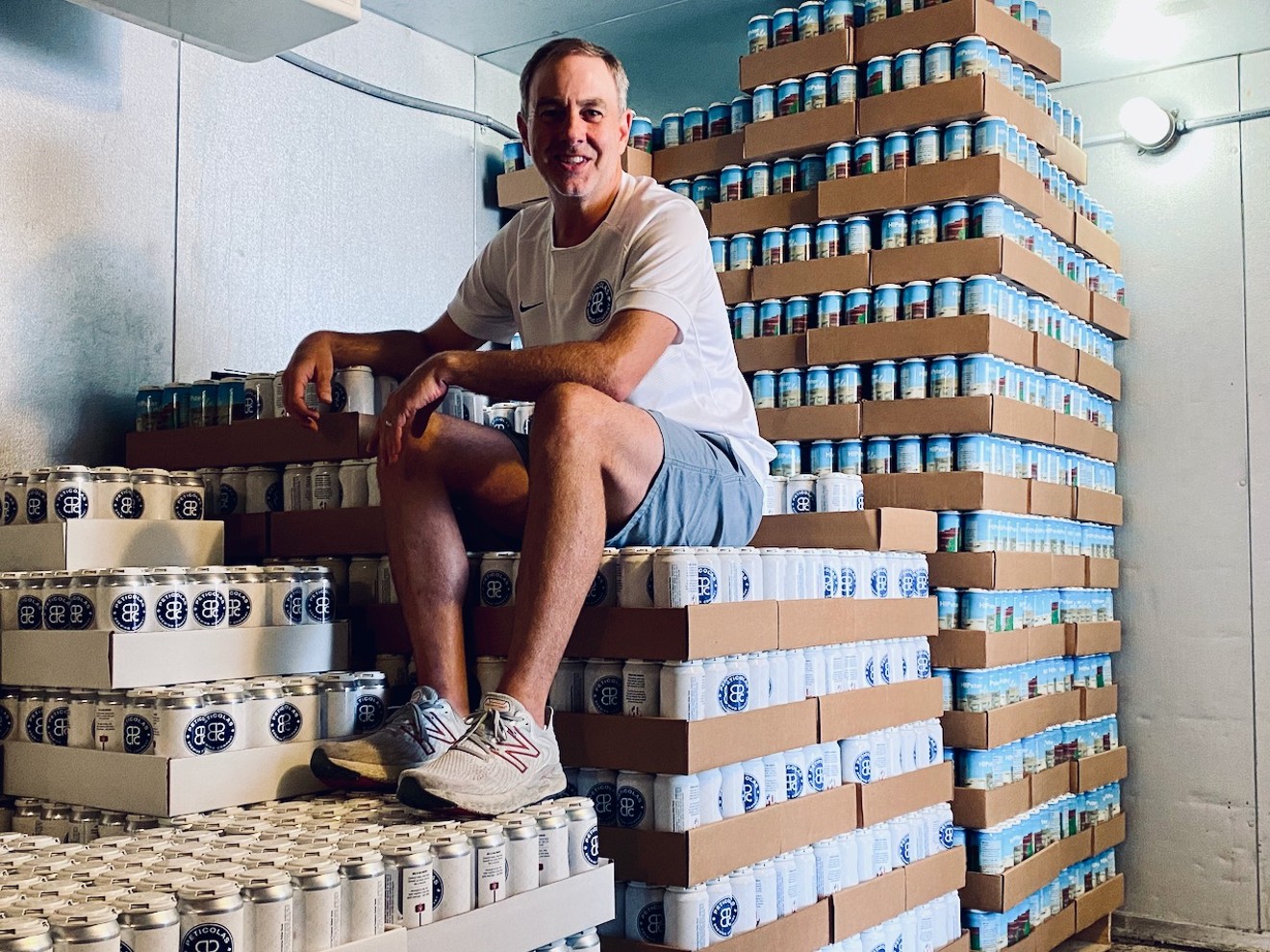 Micheal Peticolas sits atop cans in his brewery. Lauren Drewes Daniels
North Texas beer drinkers rejoice. The long wait is finally over. Peticolas, the beloved Dallas brewery, is making three of its beers available in stores throughout North Texas. This is the first time in its 10-year history that the beermaker is branching out and embracing retail distribution of its beer.

The decision to sell canned beer beyond the brewery’s walls is something Michael Peticolas, the brewery’s eponymous founder and owner, has always envisioned. But why start now after a decade in business? The timing just seemed right.

“I’ve kept an ace in the hole,” Peticolas says. “I’ve kept a card up my sleeve for the sole reason of being able to really pump life into the brewery when it needed it. Having been through some really tough rows to hoe the past two years, it certainly made playing that card seem much more beneficial than it would be to hold onto it.”

For now, the scope of distribution will remain small, with products available only in select locations. Peticolas does all the work canning and delivering its beers in-house, rather than relying on one of the two giant distributors in the area: Andrews Distributing and Ben E. Keith.

Beer lovers can find Velvet Hammer, Golden Opportunity and Sit Down Or I’ll Sit You Down in 10 stores in Carrollton, Colleyville, Dallas, Euless, Fort Worth, Irving, McKinney, Plano, Richardson and The Colony.

Dallas residents can meet their Peticolas needs at Craft Beer Cellar, Parkit Market, Pogo’s and North Oak Cliff Beer & Wine. Peticolas has released a complete list of where to find its beers on Facebook.

“I’ve known Mike before he even had the brewery,” says Mike Todora, a manager at Parkit Market. “He was getting his CO2 from us so he could brew beer. So, we’ve had a long relationship with Mike, and we are extremely happy to sell his cans. We’ve been selling his kegs since day one. We’re currently his largest distributor in Dallas. We sell more kegs than anyone else.”

Retailers selling Peticolas cans must adhere to certain quality control guidelines. Namely, they must always store the beer cold. Still, distributing canned beers to places like Parkit Market, which is celebrating its 60th anniversary this year, opens a whole new revenue stream for Peticolas. Selling kegs only to restaurants, bars and retailers accounts for just 35% of the overall beer market.

“The other 65% is the off-premises package beer market — bottles and cans in grocery stores, bars, restaurants, convenience stores, liquor stores, whatever,” Peticolas says. “Typically, a brewer can rely upon the ability to double its production by getting their beer into a packaged product.” 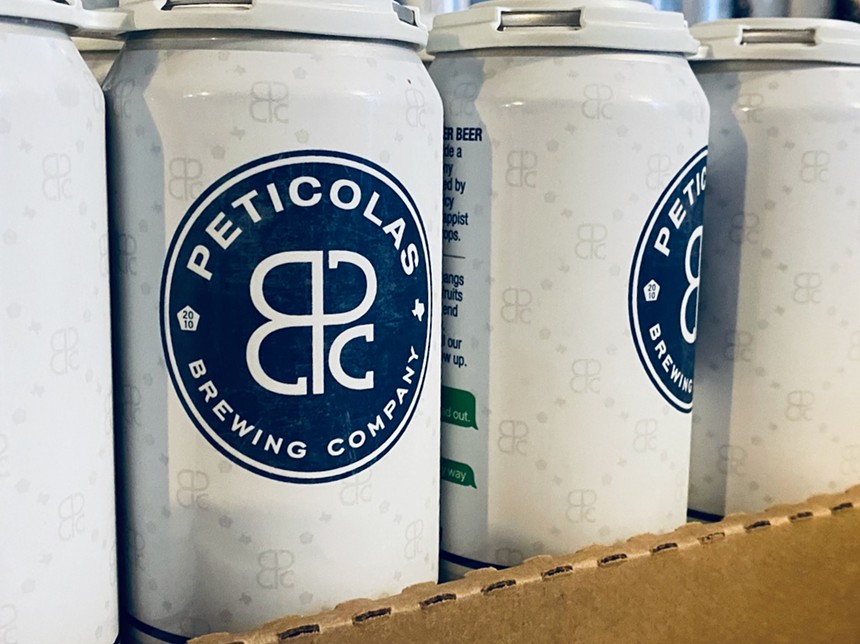 Peticolas is having a little Fun Run and Breakfast this Saturday to celebrate Velvet Hammer.
Lauren Drewes Daniels
The brewery produces around 5,000 barrels of beer annually. Once it ramps up production on packaged beer, Peticolas says it will be producing some 12,000 barrels per year. The increase in production and distribution will not happen overnight, though.

“It’s going to be a slow burn,” Peticolas says. “It will continue to pick up steam and start to enter into some of those other retailers — your grocers, your convenience stores. Those will kind of be the last ones. It’s about making sure we don’t get in over our skis, making sure that we’re still able to provide the product, which is A+, world-class, exceptional.”

The one thing he wants to avoid is unleashing his product haphazardly into the world. He would rather take the time and energy to control Peticolas’ growth. He has always been keen on emphasizing quality and protecting his brand over everything else, even if it means the demand for Peticolas beers often exceeded supply.

Peticolas has always been a brewery that has done things differently. Even as the Texas Legislature began loosening regulations surrounding beer distribution over the past decade, Peticolas didn’t dive headfirst into untested waters.

Instead, Michael Peticolas focused on the brewery’s reputation. He didn’t leap at the opportunity to build a taproom at the brewery when it became legal in 2013. He took his time and built one that best suited his vision. When the Legislature allowed breweries to sell to-go beer in 2019, Peticolas began its first real foray into canning. Doing so proved to be a lifesaver when the COVID-19 pandemic and subsequent shutdowns struck the following year.

Now, Peticolas is taking the lessons it learned over the past decade and embarking on a new chapter. Widespread distribution is a potential windfall for the brewery. With canned Peticolas more readily available, the brewery can further solidify its place as a favorite of North Texas beer drinkers.

“I challenge you to find another brewer that has this opportunity in front of them,” Peticolas says. “I don’t think you can because everybody has already played this card. Everybody has already been out there. They’re dealing with whatever it is they’re dealing with while I get to enjoy — I’m not going to call it automatic growth — a close to guaranteed revenue stream that we haven’t tapped into. That’s going to be hugely beneficial for us over the long haul, and we’re definitely excited about it.”
KEEP THE DALLAS OBSERVER FREE... Since we started the Dallas Observer, it has been defined as the free, independent voice of Dallas, and we'd like to keep it that way. With local media under siege, it's more important than ever for us to rally support behind funding our local journalism. You can help by participating in our "I Support" program, allowing us to keep offering readers access to our incisive coverage of local news, food and culture with no paywalls.
Make a one-time donation today for as little as $1.