Like your dog dragged through the garden? Or with mayo? Let's fight! Courtesy of Portillo's
Chicagolanders in North Texas take heart: You left Chicago, so now Portillo's is coming for you — even before their actual brick-and-mortar location, which is scheduled to open later this year.

Portillo's first opened in a small trailer in Villa Park, Illinois, in 1963 and now has more than 60 locations across the U.S. They're popular for their Chicago-style hot dogs made with Vienna Beef franks "dragged through the garden" (mustard, relish, celery, freshly chopped onions, sliced red tomato, kosher pickles and sport peppers on a steamed poppyseed bun), Italian beef sandwiches, cheese fries and chocolate cake shakes.

In March the company announced they're opening a North Texas outpost as part of a massive expansion across the US. Ahead of that, they're sending down their Portillo's truck, which is called the Beef Bus and unfortunately isn't anything like the Oscar Mayer Wienermobile, but we imagine many will still flock to it.

It's still yet to be decided if North Texas can support a stand-alone hot-dog restaurant. We don't have a great record; Luscher's Post Oak Red Hots, Wild About Harry's and Hoffman Hot's all opened and closed rather quickly (even though Luscher's hots are thankfully still on many menus). But perhaps the long-standing fame of Portillo's will see it through. 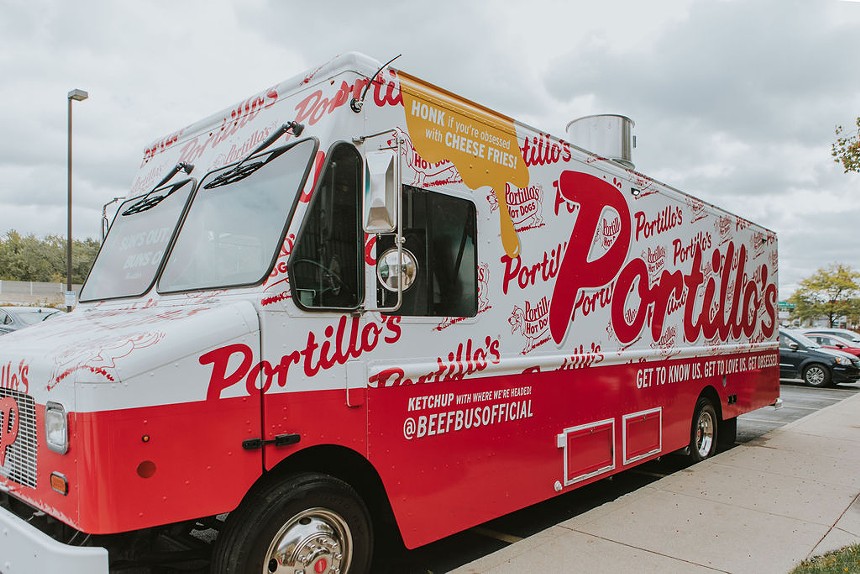 Then that weekend, July 15 - 17, they'll be at the Summer Truckin' Nationals at AT&T Stadium, so you'll likely need tickets to the event to try them there.

Saturday, July 23, is their last showing at Harvest House in Denton, 331 Hickory St., from 4 to 8 p.m.
KEEP THE DALLAS OBSERVER FREE... Since we started the Dallas Observer, it has been defined as the free, independent voice of Dallas, and we'd like to keep it that way. With local media under siege, it's more important than ever for us to rally support behind funding our local journalism. You can help by participating in our "I Support" program, allowing us to keep offering readers access to our incisive coverage of local news, food and culture with no paywalls.
Make a one-time donation today for as little as $1.