Calvin Medders works with the animals on Chubby Dog Farm, which he and wife Karyn recently sold to Daz and Daniel Brown. courtesy of Chubby Dog Farm
When Karyn and Calvin Medders decided to move closer to family after their fourth grandchild was born last year, it meant putting their farm in East Texas up for sale. Since 2013, the couple has owned and operated Chubby Dog Farm, a renowned supplier of pork to restaurants throughout the state.

Multiple inquiries came in when the Medders announced they were selling the farm. Several Dallas chefs contacted them as well as a chicken farmer from New York. However, one potential buyer stood out.

Driftwood Meadows, which Dez and Daniel Brown started in 2018, bought the business side of Chubby Dog Farms — the pigs — this past spring. For the Medders, the decision to sell to them was the right fit because of the location and how they run their existing farm.

“They have a very similar mindset,” Calvin says. “They’re only located about 30 minutes from where we were. Their water is going to be very similar, and that’s something that really goes into the flavor of a pig, where they’re rooting around, what they're eating and how much exercise they get. It just kind of lined up to where I think they’re going to have the same quality; it’s going to be a very similar product and a really good fit.” 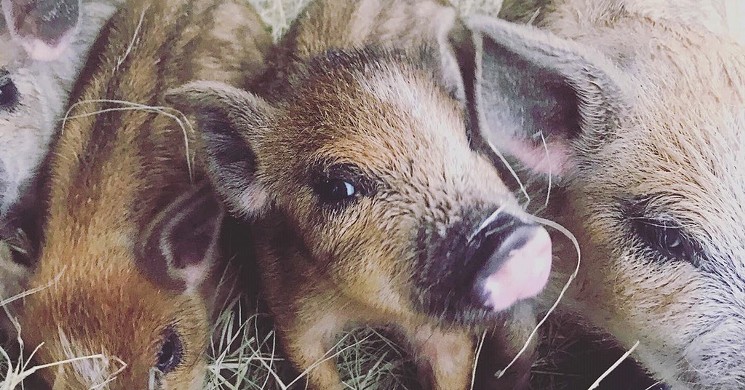 Heritage pigs are known for producing some of the best pork.
courtesy of Chubby Dog Farm
The Browns have a poultry and cattle business located in Centerville, about 45 miles from where the Medders’ farm in Grapeland. While the two sets of farmers didn’t know each other formally before the sale, Dez had followed Chubby Dog Farm on Instagram for some time. She says it was only natural to reach out and ask about buying the operation when it came up for sale.

“We do pasture-raised chicken for egg and meat as well as turkey,” says Dez, who describes herself as a Dallas girl but country at heart. “So, we do ground turkey all year and then Thanksgiving turkey. We do grass-fed and finished beef. My logo has the chicken, pig and cow on it, so I needed to complete that trilogy.”

As the families were completing the sale, the Medders took the Browns on a tour of restaurants that already carried Chubby Dog Farms’ pork. They introduced them to chefs in Austin and Dallas and ate at Matt McCallister’s Homewood. The plan is for Driftwood Meadows to continue to foster and grow those relationships.

To do that, they’ll first have to have pigs available. The Browns purchased all of Chubby Dog’s pigs. That included the breeding stock — a Mangalitsa and a Hereford boar, a Red Wattle sow and two Hereford sows — as well as 14 “growers” weighing about 100 pounds each, which should be ready to process by the end of the year.

As the pigs mature, they’ll roam the acreage of Driftwood Meadows, enjoying all that the post oak savannah ecoregion has to offer. Allowing the pigs to essentially have free rein on parts of the property isn’t just beneficial for the animals, it’s also good for the land.

It will be several months before restaurants are serving their pork, but Driftwood Meadows’ other products are available through their website. Profound Foods also distributes their meats to homes and restaurants locally.

Even though the Chubby Dog Farm name will fall by the wayside with the sale of the pigs and the Medders’ move, they feel the quality that they were known for will continue with the Browns and Driftwood Meadows.

“We couldn't have planned it better,” Karyn says. “We couldn’t have found a better family and location. It seemed to all just really fall into place.”
KEEP THE DALLAS OBSERVER FREE... Since we started the Dallas Observer, it has been defined as the free, independent voice of Dallas, and we'd like to keep it that way. With local media under siege, it's more important than ever for us to rally support behind funding our local journalism. You can help by participating in our "I Support" program, allowing us to keep offering readers access to our incisive coverage of local news, food and culture with no paywalls.
Make a one-time donation today for as little as $1.