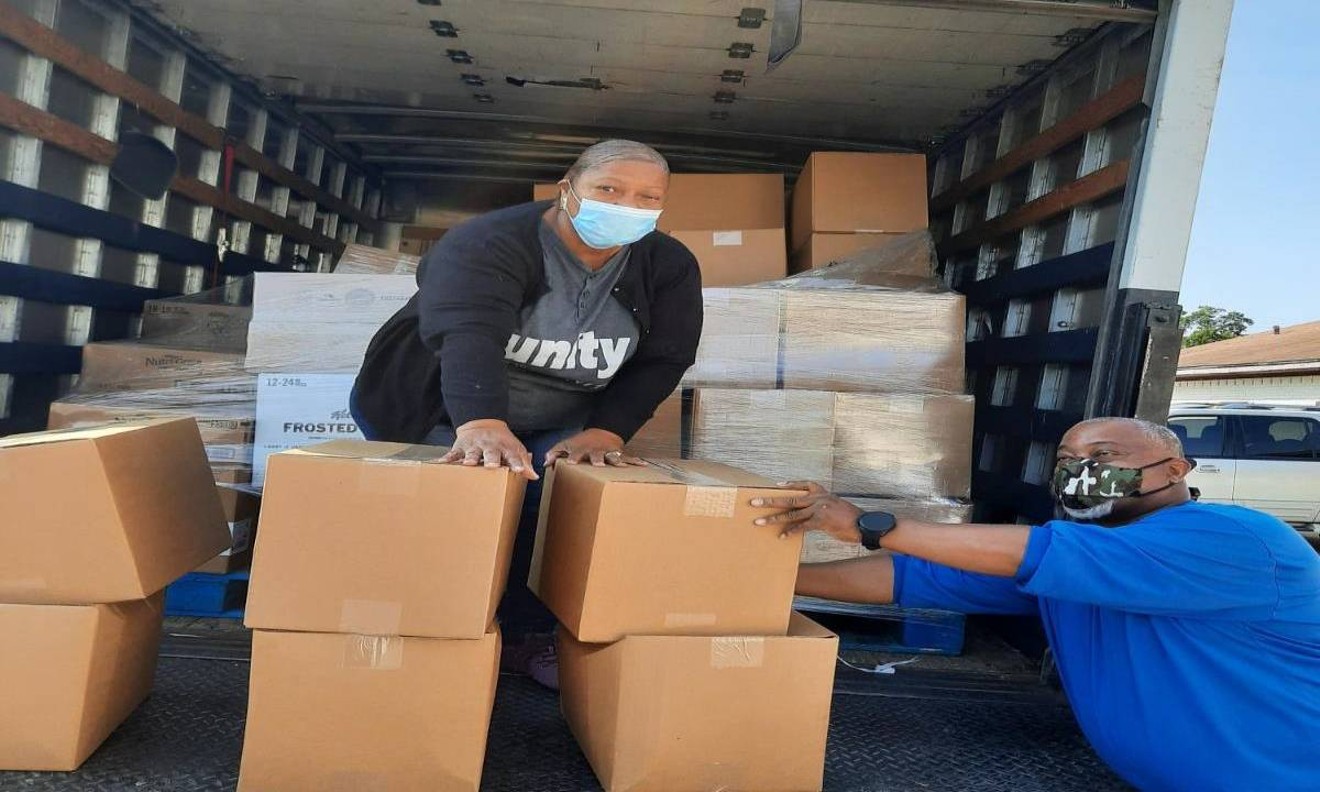 Volunteers distribute food boxes through Services of Hope. couresy of Services of Hope
On a recent Sunday afternoon, volunteers gathered at Kirkwood Temple CME in the Wolf Creek neighborhood of southern Dallas. They were there with local nonprofit Services of Hope to help register people to vote and deliver 25-pound “Hope Community Food Boxes” filled with healthy food to families in need.

Despite the volunteers showing up to work, the organization’s food box program recently found itself at the center of a controversy at Dallas City Hall.

How the city of Dallas distributes COVID-19 relief funds from the federal government is a matter that affects every resident, especially those hard hit by the pandemic. Yet, at a council meeting in late September, the topic of who should get a portion of some of those funds sparked a nearly hour-long debate.

The council was considering the allocation of some $850,000 from the U.S. Department of Treasury coronavirus relief funds to local nonprofit organizations that are distributing food boxes in various communities. Eleven organizations initially applied to receive a portion of the money in the form of a grant. City staff recommended five for approval.

Those five organizations and their requests for funding are Citizens Development Center under the name Achieve for $90,000; CitySquare for $127,469; First Presbyterian Church of Dallas' The Stewpot for $105,928; Services of Hope Entities Inc. for $388,903; and The Visiting Nurse Association of Texas for $137,700.

“I think deferring this is an insult to this organization and their track record of success." – Dallas City Council member Casey Thomas

For one council member, the nearly $400,000 that Services of Hope was requesting raised a red flag.

“I’m a little concerned that I’m not familiar with this group,” District 1 City Council member Chad West said during the Sept. 23 meeting. “They could be a wonderful group and do great work. I’m sure they do. But the numbers are what concern me. They’re receiving twice the amount of other groups that are very well known: VNA, which does Meals on Wheels, we’ve got CitySquare, and the Stewpot is on here.” 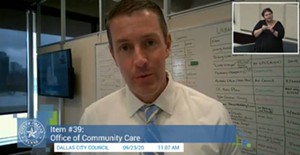 Council member Chad West
Screenshot by Doyle Rader
Established in 2004, Services of Hope originally helped serve underperforming schools in Dallas ISD by providing after-school snacks and meals to students as part of the North Texas Food Bank’s Kids Cafe program. That service evolved to include food distribution at the schools for families through the organization’s food pantries and eventually led to providing food for whole communities.

When the pandemic hit, Services of Hope reached out to one of its long-time partners, Hardie’s Fresh Foods, to create mobile, farm-to-community markets that set up across North Texas to distribute food boxes through a USDA program.

May 15, the organization put its first Farmers to Families food box in Dallas-Fort Worth, says Daniel Prescott, president and CEO of Services of Hope. A month later, they released boxes of protein.

Services of Hope also operates in the Panhandle out of Amarillo as well as Kaufman, Grayson and Collin counties. Its headquarters are in Dallas, though, where it serves neighborhoods such as Hamilton Park, Oak Cliff, South Dallas, Vickery Meadow and West Dallas. Services of Hope’s offices are located at Mockingbird Community Church in East Dallas.

“On the volume that was distributed in North Texas, we are somewhere at 49% of the total USDA boxes that were distributed in the state of Texas,” Prescott says. “That's the largest for a non-food bank organization. And we are not connected to any food banks. We're an independent nonprofit.”

During the vetting process of the 11 organizations vying for grant money, a panel of city staffers from three separate departments graded them on a 100-point scale. According to city documents, Services of Hope scored the fourth highest of the top-five organizations with a mark of 84.67, beating out CitySquare (80.33) and coming in below First Presbyterian (90.33), Citizens Development Center (88.67) and VNA (87.67).

City staff based the amounts awarded to each organization on the scores and initial requests. They allocated just 78.4% of Services of Hope’s request, which was $496,080, for council approval. It was the lowest percentage of all five. No one raised concerns about the organizations during the application assessment process.

“These are the five vendors that scored the top, as relates to their application,” chief of staff to the city manager Kimberly Tolbert said during a line of questioning by District 8 City Council member Tennell Atkins. “We’ve not received any formal complaints. We’ve not received any written correspondence about any of the five vendors that we have before you today.”

Still, wary of the price tag and its involvement in the USDA’s Farmers to Families Food Box program, West motioned to divide the question and consider the city’s agreement with Services of Hope separately, drawing the ire of District 3 City Council member Casey Thomas.

“I am adamantly against this motion,” Thomas retorted. “I am very familiar with Services of Hope. … We want to provide an opportunity for more of our community-based organizations to get this grant. This is the only awardee that has an African American executive director. This organization has done a good job — great job, as a matter of fact — in providing service to the community. 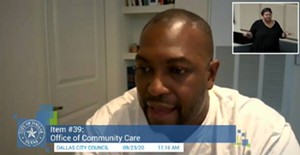 Council member Casey Thomas.
Screenshot by Doyle Rader
“I personally vouch for the leadership,” Thomas continued. “I think deferring this is an insult to this organization and their track record of success. So, I will adamantly be opposing this motion.”

According to Prescott, the funding Services of Hope is requesting will go toward helping the organization expand its outreach. Its aim is to create what Prescott calls permanent five-star food pantries to help serve hard-pressed communities through its mobile truck units.

None of this came up at the council meeting, however. Eventually, after a lengthy back-and-forth between council members and city staffers seeking clarification of exactly how Services of Hope would use the proposed funds and a final, impassioned defense of the organization by Thomas, the council reached a compromise. West amended his motion, gaining unanimous council approval. It granted half of Services of Hope’s request — $194,451.50 — with a move to reconsider the remaining funds at the next agenda meeting.

The news came as a surprise to Prescott. He missed the council’s discussion that day and said no one from the council or city reached out to him before the vote.

“I don’t know what happened, so I can’t say why [council member West] attacked us,” Prescott said. “But you should call me or ask me to come and speak.”

When the item came back before the council Oct. 13, the debate wasn’t as charged as it had been two weeks prior. Still, West again peppered city staff with questions about why they awarded Services of Hope three times the amount of the other providers.

“My concern, as I’d mentioned, was that there’s so much more money going to this one group that is not, I think, as well established in this type of service,” West said. “Again, this is taking nothing away from this organization. I know they do good work.”

City staff based the decision on the number of families Services of Hope is serving as well as the type of service they are providing. In this case, Services of Hope is providing boxes that will feed a family for an entire week rather than just supplementing a few meals like some of the other organizations.

This further muddled the discussion, however. None of the organizations uses a standardized unit to report clients and meals served. Each uses its own metric.

“I think there’s an issue of governance and stewardship with the dollars, and that we need to have standard outcome measures for all of our nonprofits so that we can compare apples to apples,” council member Cara Mendelsohn said about the inconsistent reporting. “It doesn’t allow us to effectively evaluate a program when we can’t look at the different kinds of outcomes.”

The hour of debate that Services of Hope’s request for funding consumed — over the course of two meetings — highlights the confusion that a lack of information can cause in city governance and how it can affect organizations and communities.

In the end, with assurances from city staff that the budget office has the ability to audit them, the council voted unanimously to approve the remaining $194,451.50 for Services of Hope, helping bolster its ongoing food distribution efforts.

“The average box costs about $30. The average box weighs 25 pounds,“ Prescott says. ”When we asked the city for this money, we told the city that we would, in-kind, give back to the city of Dallas $12 million in entire product. Twelve million dollars.”
KEEP THE DALLAS OBSERVER FREE... Since we started the Dallas Observer, it has been defined as the free, independent voice of Dallas, and we'd like to keep it that way. With local media under siege, it's more important than ever for us to rally support behind funding our local journalism. You can help by participating in our "I Support" program, allowing us to keep offering readers access to our incisive coverage of local news, food and culture with no paywalls.
Make a one-time donation today for as little as $1.