These are lines. They're waiting to go inside the Four Corners taproom to order food from Filipino food vendors stationed indoors. Brian Reinhart
On Sunday a crowd of hungry Dallasites arrived at Four Corners Brewing Company to dine at the city’s first Filipino Food Festival. The vendors — almost all of them recent startups and part-timers with day jobs — were the focus of a triumphant victory party for Filipino cuisine, which is making rapid entry into the Dallas mainstream.

Originally, I was going to use this article to talk about all the delicious food I tried at the festival and recommend all of the various vendors. But the real story is different. The crowds were too huge. Filipino food is too popular. It seemed like everyone in town was there.

We arrived promptly at noon, the official start time for the festival, to discover lines were already growing across Four Corners’ taproom and outdoor seating areas. At 12:05 p.m., I joined my first line — for Not Your Lola’s, one of the city’s most popular pop-up food businesses — with beer in hand. The beer was finished by the time I got to the front of the line a half-hour later.

Members of the crowd told me that other lines were even longer. By the time we surrendered, around 2 p.m., the wait for a bowl of noodles was 50 minutes. Another patron told me he had waited over an hour at another booth.

“You guys probably didn’t expect this,” I said to a bartender.

His answer was filled with the sorrow that comes from unheeded wisdom.

“I expected this,” he said. “Nobody else did. I told them, but they didn’t listen.”

More than 16,000 Facebook users had clicked the “Interested” button on the festival’s event listing. I guess a surprisingly large number of them actually went. 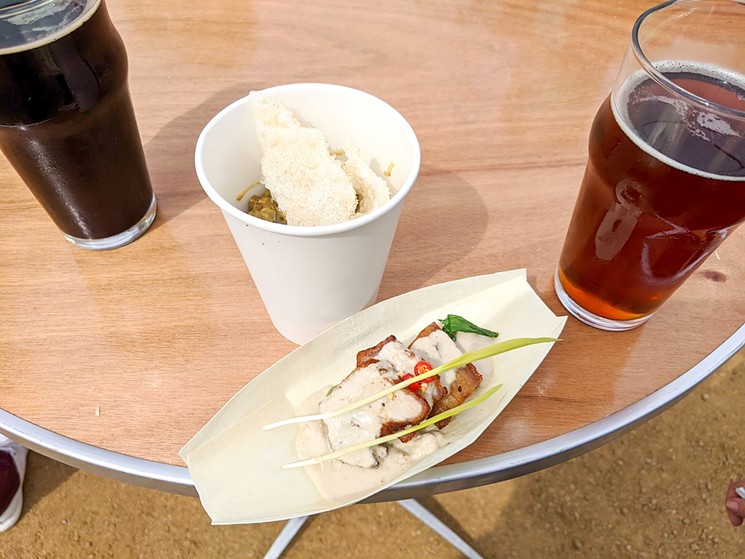 Two bites from Not Your Lola's alongside two beers from Four Corners. (Dear Four Corners, If you're reading this, keep the brown ale around for a while.)
Brian Reinhart
So, yes: This article was originally going to be about the delicious food we ate at Dallas’ Filipino Food Festival. But the two dishes I ordered from Not Your Lola’s — slices of pork belly braised in coconut milk and blasted with heat to achieve an ultra-crispy skin, and a comforting vegan cup of stewed mung beans, mushrooms and spices — proved to be the only Filipino food I ate.

Afterward, having braved the relatively short line for spectacular black sesame ice cream made by Stephen Smith (owner of the wonderful but now-closed Betty Ringer Ice Cream shop in West Dallas), I contemplated what festivals like this one mean for the future of Dallas food.

Our Filipino brick-and-mortar restaurant scene right now is heavily traditional. One of the chefs at the festival had told me privately last year that many local restaurants serve the kind of food grandmothers cook for their families.

But the creativity of a new generation of cooks and chefs is here in abundance. More important, so is the demand.

As a wave of small, innovative new Asian restaurants appears across Dallas — places such as Ka-Tip Thai Street Food, Khao Noodle Shop, Cafemandu and Salaryman — it’s not just critics who are responding with enthusiasm. These restaurateurs, almost all of them rookies in the business, are finding their audiences. They’re some of our food business’ biggest recent success stories.

In other words, it was hard not to look around the crowd at Dallas’ Filipino Food Festival — the huge, sprawling crowd, waiting patiently in hourlong lines and in many cases repping their best Philippines fashion — and think that this city has a hungry market for a lot more food like this, on a permanent basis. Chef Randall Braud, formerly of Not Your Lola’s, already has a permanent restaurant concept brewing.

I just hope that when the men and women behind our Filipino food movement all get to open their own full-time kitchens, the lines will be a little bit shorter.
KEEP THE DALLAS OBSERVER FREE... Since we started the Dallas Observer, it has been defined as the free, independent voice of Dallas, and we'd like to keep it that way. With local media under siege, it's more important than ever for us to rally support behind funding our local journalism. You can help by participating in our "I Support" program, allowing us to keep offering readers access to our incisive coverage of local news, food and culture with no paywalls.
Make a one-time donation today for as little as $1.