The salad bar at Dunston's on Lovers Lane is the only iteration — the original Harry Hines location doesn't have one. Nick Rallo
All-American is a series that looks at beloved, longstanding North Texas eateries and examines their histories while exploring how the food has changed — for the good or bad — over the years.

Ground pork belly sizzles and crisps into Dunston’s housemade bacon bits. French bread is sliced and fried. Someone tears chunks of fresh blue cheese and folds them into a sour cream-mayonnaise mix. Some croutons are baked, some are fried. Ranch dressing, iceberg lettuce’s lifelong friend, doesn't come from a Hidden Valley plastic bottle; it's house made. The brittle wood bowls go in the cooler, and you never, ever cross the chain — a modest linked barrier to ensure that Dallas’ last great salad bar lives on, unharmed.

In 1955, Gene Dunston opened a meat-centric drive-in just off the then-sparklingly new Harry Hines Boulevard. Cars zipped by at 55 mph, often swerving into Gene's for a good old road breakfast before heading back to Interstate 35. Gene’s Wheel-In, as it used to be known, adapted into a steakhouse in the mid-'60s, offering the charred grill marks on beef cuts from a mesquite wood fire. The Wheel-In's success led to a second flagship — a new Dunston's Steak House — on Lovers Lane in 1969.

Not long after, inspired by Steak and Ale, Gene Dunston felt the competitive urge bubble up: He wanted to add a stupendous salad bar.

The salad bar was, and has been, one of the most heartwarming throwback wonders, a star hovering in a distant universe outside food trends for decades. Dallas' last great salad bar is the deeply lovable hero of one of the most unpretentious steakhouses around. I asked Gene Dunston's son, Chad Dunston, who runs the Lovers Lane location with his sister and wife, if the customized salads are still popular. He answered without missing a beat.

Every day, a Dunston’s team member is assigned to care for the salad bar. Greens are replenished tenderly and ice piled high, keeping items like the potato salad, sparkling with pickle juice, chilly cold. Dunston’s Lovers Lane salad bar is like a newborn panda bear: It’s one of the neediest, tenderly cared-for species in the family, and its greatness extends back nearly 50 years.

Wooden bowls are stacked in an icy cooler next to the bar. Recently, the restaurant sunk a bucket of money into a custom stainless drawer system. There are only a handful of salad bars like this left in the city, and Dunston's is, by far, the only one that's so thoughtful. A salad bar is a Paleolithic idea because of the health code challenges, Chad Dunston tells me. Food must be kept a certain temperature if it’s exposed in the sweet, sweet mesquite air. 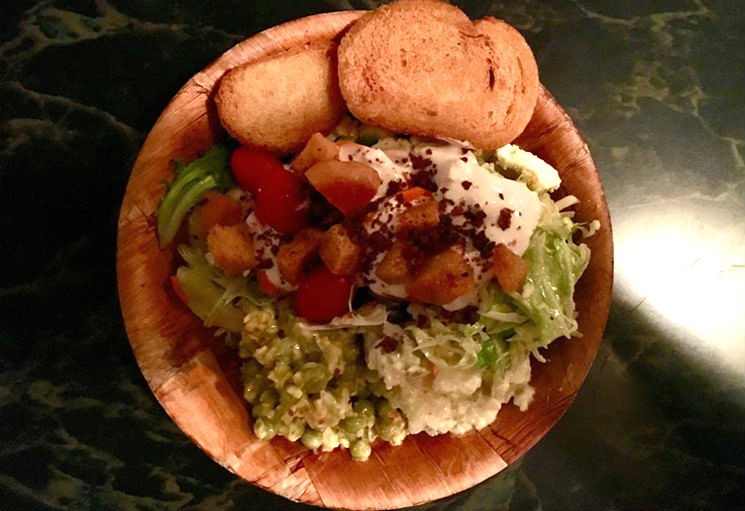 Dim light and croutons three ways. This is a chilled bowl at Dunston's Steak House salad bar, a staple for almost 50 years.
Nick Rallo
“We’ve done little things over the years that people may not notice,” Dunston says.

On my recent visit, I fill a chilled wooden bowl with creamy pea salad, fried croutons and potato salad, which tastes like summer fireworks. Giant marlins ride the steakhouse walls in the back, where the marble-backed bar satisfies cravings for booze and grilled steak.

“This is a happy salad bar,” says Leslie Gosnell. She and friend Gina DeBeer are diving into their bowls; they’ve been Dunston’s salad bar diners since 1999.

Who’s crazy enough to hand-craft salad items, nursing ingredients with ice and dedicating decades to an exposed-air, do-it-yourself food bar? This is a freestanding monument to the purity of a simple food idea: It’s just a bar full of good food. It’s herbs and vegetables, and you build everything yourself. It’s likely we’ll never see another like it.

“We have these real popular chairs,” Chad Dunston says, probably searching for something that’s changed in the past five decades.

Who says Dunston's needs to change? It’s a singular, precise food experience. You don’t go to Dunston’s for uni-topped pasta. You show up to Dunston's for steak, poker (a group is playing when I’m there) and a salad bar enriched with cloud-white dressing. Some change is inevitable for long-running restaurants and dishes because we’ve sustained love for them over the years.

Still, some things don’t need to budge. They just need to keep cool and make a few updates along the way.