The front of El Oaxaqueño Lauren Drewes Daniels
“I was born in an indigenous town in Oaxaca, Mexico. It is a community that has a wonderful culture and very ancient traditions of the ancestral Zacatecas Indians,” says Honorio García, owner of El Oaxaqueño Taquería y Panaderia. “My grandmother was hired to cook food for each community event [in Oaxaca]. I had very nice Oaxaqueña costumes.”

Garcia learned to cook by helping his grandmother at those events, and most of the dishes he prepares at his restaurant are based on recipes he learned from her.
click to enlarge 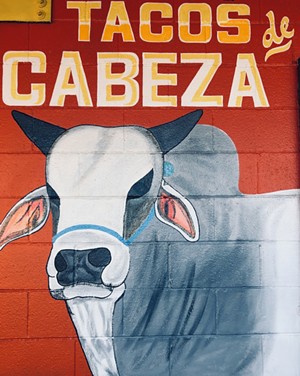 This is the fourth incarnation of Garcia’s particular form of cuisine. Most recently, Garcia had Mi Lindo Oaxaca on West Davis Street, which Observer food critic Brian Reinhart lamented when it shuttered last fall, after having ranked it ninth on the 100 Best Restaurants list of 2018.

While this new place, El Oaxaqueño Taqueria y Panaderia at 2324 W. Clarendon Drive, is smaller, it is still a cultural gem with a unique menu.

Garcia is proud of his homeland and has created a shrine of sorts to the food of the area. Pictures and art are a tribute to a culture that goes back to the 16th century. The city of Oaxaca is listed by Unesco as a World Heritage property, “as an example of a XVI century colonial city,” that was occupied by a group of Zapotec Indians.

Garcia, along with the space and food he's created, provides a charm that is a tad bit exotic, given there aren’t many Oaxacan restaurants in these parts, and delightful.

I asked Garcia to recommend something to eat, and he suggested the tlayudas. I was honestly relieved he didn’t suggest the patitas de pollo or chapulines. While I am brave, I'm mostly a pansy. 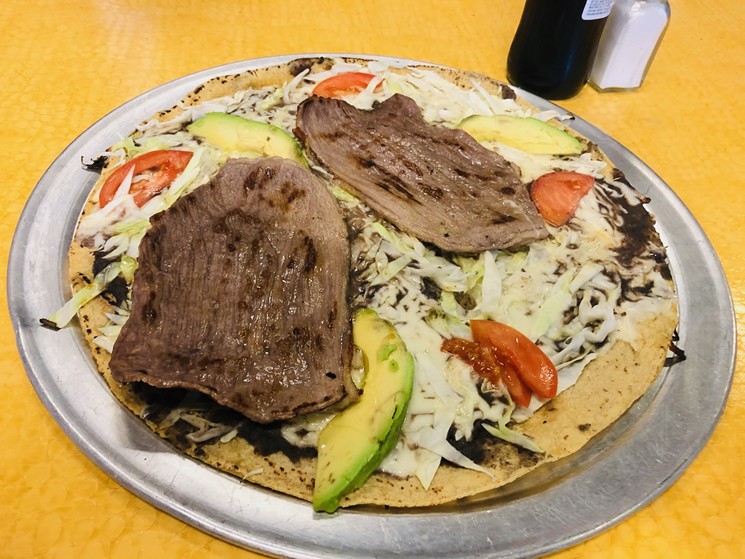 Tlayudas at El Oaxaqueño
Lauren Drewes Daniels
Tlayudas is an Oaxacan street food that is easiest, although probably not best, to describe as the Mexican version of pizza. The base is a thinly-pressed, large, slightly crispy tortilla, covered with refried beans (black here), shredded iceberg lettuce, avocado, cheese and whatever meat you’d like, including chapulines.

About the size of a medium pizza, it’s served whole, not sliced. Just grab a hunk with your hands and pull pieces off. The crust bends and crackles, heavy enough to hold the toppings, but not a bit chewy or doughy. I ate about a third of one and the family devoured the leftovers in minutes.

If you're so inclined to keep track of the different dishes and breads made there, follow their Facebook page. It's an at times hunger-inducing and at other times a boundary-pushing experience. Garcia enjoys posting videos from his kitchen; sometimes soft tortillas rising on the griddle, sometimes a basket of crickets. See? Interesting and delicious.

El Oaxaqueño Taquería y Panadería, 2324 W. Clarendon Drive. Open 10 a.m. to 10 p.m. Monday through Thursday; 10 a.m. to 5:30 p.m. Friday; closed Saturday; 10 a.m. to 8 p.m. Sunday.
KEEP THE DALLAS OBSERVER FREE... Since we started the Dallas Observer, it has been defined as the free, independent voice of Dallas, and we'd like to keep it that way. With local media under siege, it's more important than ever for us to rally support behind funding our local journalism. You can help by participating in our "I Support" program, allowing us to keep offering readers access to our incisive coverage of local news, food and culture with no paywalls.
Make a one-time donation today for as little as $1.