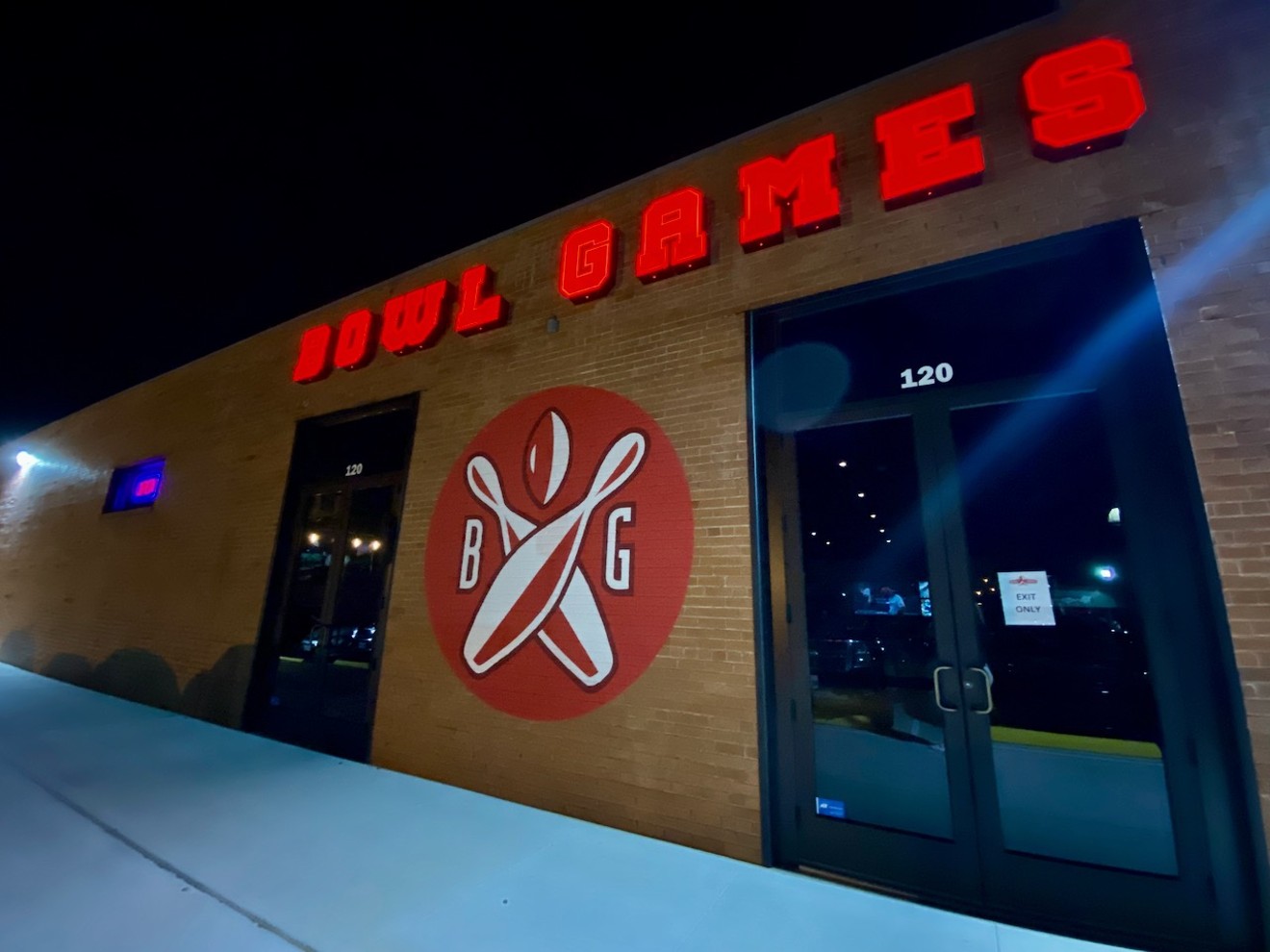 The warehouse-like space is a sporting lounge with a restaurant and bar. If you like to both watch and participate in a little competition, this is a great spot for groups or dates.

The long bar has more than two dozen craft beers on tap — many local — along with full liquor service. We grabbed a spot at the bar, which had a couple of TVs nearby, and ordered beers along with a burger and fries.

The bartender suggested Dallas' Best Burger ($17), which comes with fries. It's a tall burger made with ground wagyu, caramelized onions and candied bacon splayed out over a large leaf of lettuce with a special sauce on a toasted brioche bun. This is everything you want a bar burger to be on a Saturday night. The candied bacon, as shown in the picture below, is fighting hard to be the star of the show here. It's actually a candied bacon burger with some beef and a sheet of lettuce. Dallas' Best Burger comes with thick slabs of well-candied bacon.
Lauren Drewes Daniels
You can also choose from salads, wings, a roasted beet hummus (the hummus of choice these days), baskets of onion rings and a few varieties of hot dogs, including a Chicago dog and a Jamaican dog.

While there is foosball, a couple of shuffleboard tables and a half-dozen dart boards on a back wall, the main attraction is a game called pin toss: a combination of bowling and football that has each player throwing a football at pins set up down the lane. The goal is to knock down the pins with a pigskin rather than a bowling ball. The goal of pin toss is to knock over pins with a football. But no cussing.
Lauren Drewes Daniels
Footballs are flying everywhere inside the play area, and a variety of techniques for tossing the football into the triangle of pins was noted. From an armchair QB perspective, the soft, underhand toss might be the most efficient. (A hard bounce isn't desirable; you want a soft tumble.)

There are rules, which include no kicking the ball. And no cussing. Kids are allowed, which may be either great news or a deal killer.

Bowlounge and Bowl Games share a parking lot and are great options if you're looking to "do something," rather than just sit at a bar, drink beer and eat a burger. However, both places are great for the latter too. You'll need reservations for either, though.

Bowl Games, 139 Turtle Creek Blvd., 11 a.m. to 11 p.m. Sunday – Thursday; 11 a.m. to 1 a.m. Friday – Saturday.
KEEP THE DALLAS OBSERVER FREE... Since we started the Dallas Observer, it has been defined as the free, independent voice of Dallas, and we'd like to keep it that way. With local media under siege, it's more important than ever for us to rally support behind funding our local journalism. You can help by participating in our "I Support" program, allowing us to keep offering readers access to our incisive coverage of local news, food and culture with no paywalls.
Make a one-time donation today for as little as $1.