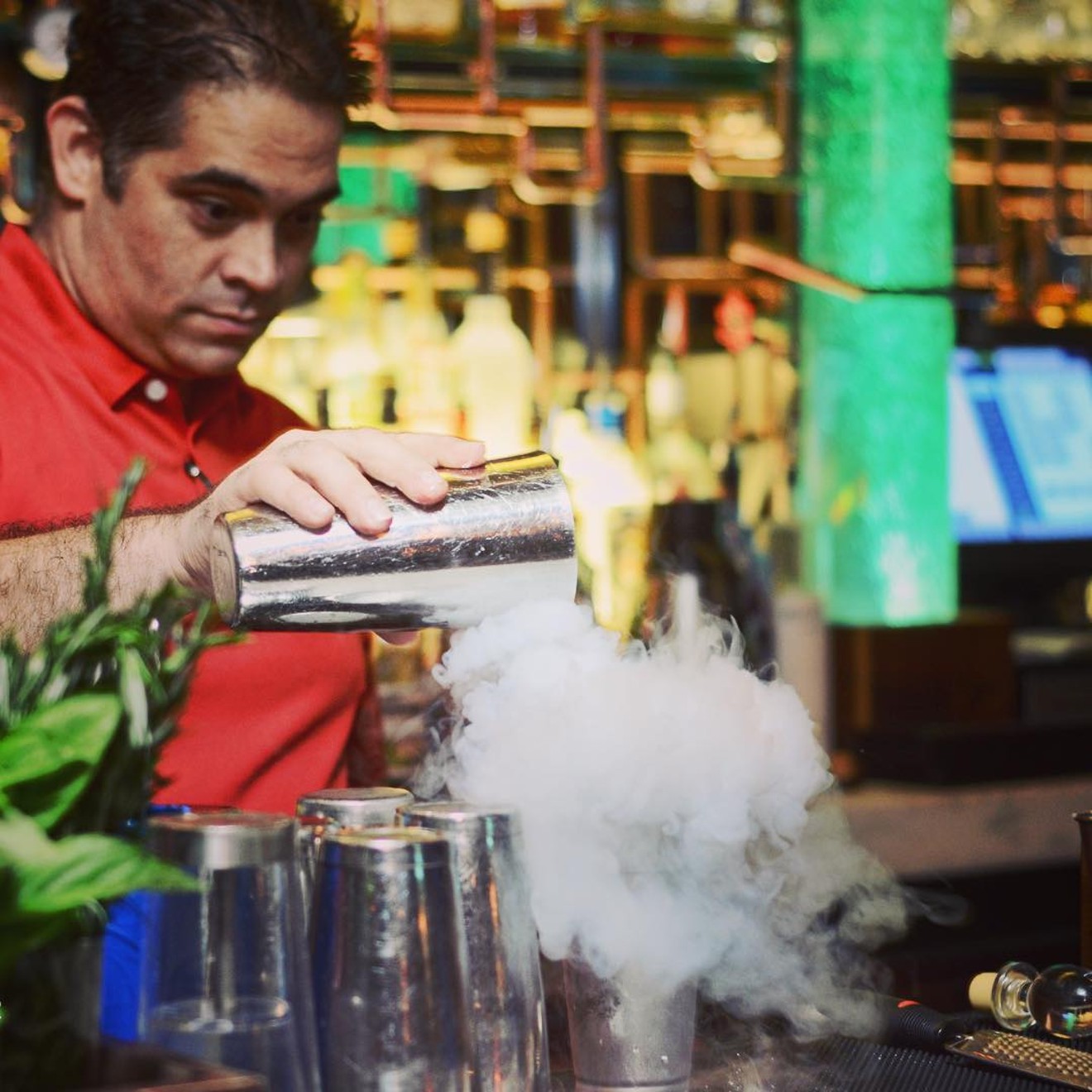 The Tipsy Alchemist's use of liquid nitrogen is so cold it's ... cool. Courtesy of The Tipsy Alchemist
We all love a good show, and bars know it. We've seen our favorite bartenders smoke spirits and use dry ice to create a bubbly brew, but now we're starting to see bars step up the smoke by using liquid nitrogen to do anything from muddle mint to make you a creamy frozen margarita right at your table. While the use of an ingredient that is 321 degrees below zero seems like a dramatic way to entertain guests, is it safe?

Liquid nitrogen can be used safely, but it requires thorough staff training. In 2012, a woman in the UK sued a bar because she drank a liquid nitrogen and Jagermeister shot too quickly, causing a perforation in the lining of her stomach, which had to be removed. In 2009, a German chef lost both of his hands after causing an explosion while handling liquid nitrogen. "Celebrity chefs and barmen need to stop portraying liquid nitrogen as a good thing to use. It is not. It is stupid. You have to be very highly trained to handle it," Doug Thornton, the chief executive of the British Compressed Gases Association, said in a story in the Telegraph.

It's not something to be scared of, but it is something to respect. If your drink is bubbling when you get it, hold off. That means there's still liquid nitrogen in it that hasn't evaporated into its harmless gaseous form. Basically, the rule to live by: if it's still bubbling, don't touch it.

There are a few bars in Dallas that do liquid nitrogen right:


The Tipsy Alchemist
2101 Cedar Springs Road (Uptown)
One of Dallas' most theatrical bars, The Tipsy Alchemist makes a production of a simple cocktail by muddling ingredients with liquid nitrogen instead going the old-fashioned route. Look for it when you order the all-over-Instagram Edison or Bramble. Since they wanted another way to entertain while they're preparing your cocktail, they also chill some of their cocktail glasses using the smoky cold. This little gimmick causes the glass to gush with smoke, which gives an eerie look to the seemingly empty glass — and makes the glass real damn cold. 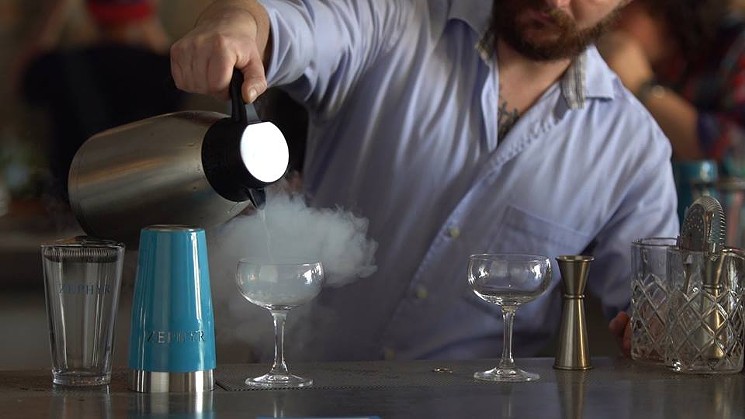 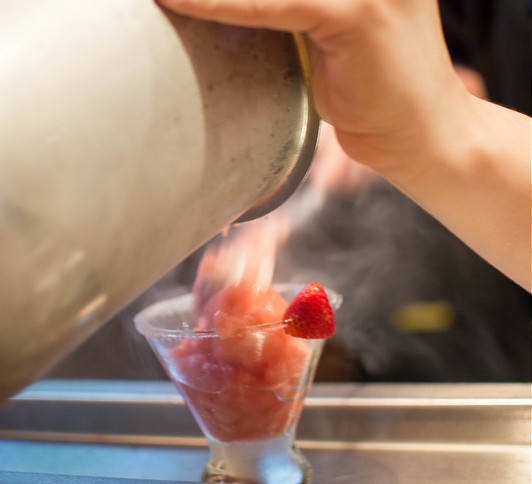 Triple M's Explosion looks like just that ... a hot mess of an explosion.
Jessica Pei Photography
Pepper Smash
7200 Bishop Road (The Shops at Legacy)
Plano's Pepper Smash tempts fate and says that liquid nitrogen is "their signature move" behind the bar. For years, they've been using it for their Triple M's Explosion (pineapple and strawberry-infused vodka), the Pineapple Express (Bacardi pineapple, ginger and pineapple juice topped with Champagne), but claim they "can do a lot with it ... whatever you want." That sounds like an invitation to get creative, no? 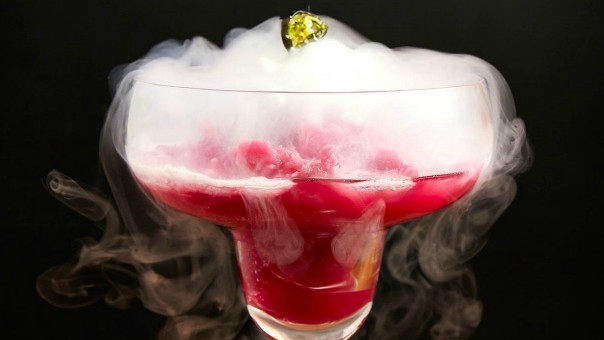 The Star Canyon Margarita got a molecular upgrade since its '90s debut.
Courtesy of Stampede 66
Stampede 66
1717 McKinney Ave. (Uptown)
Longtime Dallas restaurant veteran Stephan Pyles was one of the first adopters of liquid nitrogen in an effort to "upgrade" his legendary margarita from his famed '90s Star Canyon restaurant in his all-things-Texas restaurant, Stampede 66. He offers his already exciting Star Canyon Margarita (blanco tequila, prickly pear puree, Patrón Citronge, lime foam and candied jalapeños) and whips it with a generous pour of liquid nitrogen at arm's distance from your table. 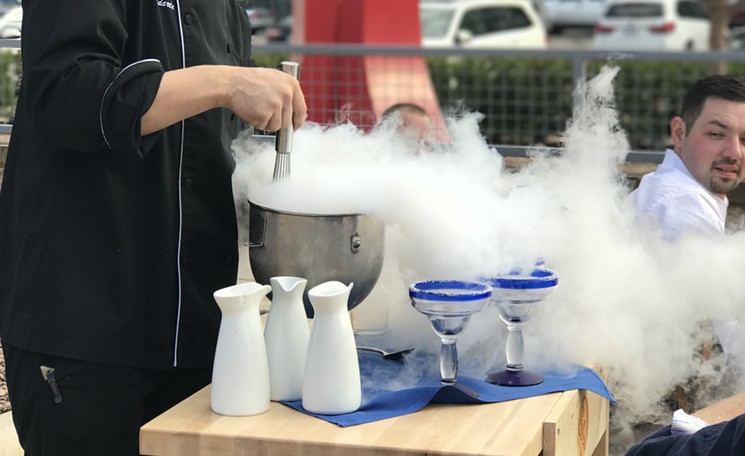 Jerry Johnson
Beto & Sons
3011 Gulden Lane (Trinity Groves)
Mexican spot Beto & Sons in Trinity Groves took a cue from Pyles and also offers a table-side marg with their Nitro Margarita (Sauza Signature Blue Tequila, orange liqueur and lime juice, topped with orange pearls). This table-side experience isn't on the menu, so you can consider yourself an insider when you order it.