The interior at Foxyco. Kathy Tran
In one direction, the Dallas skyline glitters a reflected sunset. In the other direction, a jumble of power lines clutter the air. The biggest poles file away across the Trinity River like a regiment of skinny, strict soldiers. More power lines swoop left and right, along rows of warehouses and antique dealerships as worn-down as their inventories.

And, as of May, this ugly stretch of the Dallas riverfront is now home to a trendy restaurant, one where downtown office workers and uptown cool kids mingle over $30 mains and fizzy cocktails. Foxyco is sited in one of the least likely possible places for a high-end restaurant, and that’s the point.

Much about Foxyco is unexpected. Its location is unlikely, of course, but so is the clientele. Most surprising of all, the restaurant is pairing light, summery cocktails with a defiantly big-flavored menu of fried appetizers and meaty, char-grilled main courses. At times, the restaurant risks going one novelty too far.

Crispy yucca, $11.
Kathy Tran
Here’s one twist: The menu consistently uses the word “crispy” as code for “fried.” An early summer “crispy” artichoke heart appetizer converted that vegetable into fried nuggets, still chewy at their core, and paired them with a thick, ultra-garlicky aioli ($12). It’s since been replaced by superior “crispy” yucca ($11), cut into tender cubes and served with a sweet-and-sour cherry sauce and an herb salad. The staff smartly advises combining a bit of everything in each bite.

More unexpected is the heaviness of the tuna tartare ($14). The tuna is served on large tots, made out of “crispy” rice rather than potatoes. This is a dish Foxyco chef-owner Jon Stevens first served at his other restaurant, Stock and Barrel. But my tablemates couldn’t agree on whether it was a good vehicle for raw fish. I lean in favor, but certainly the dish’s overall taste is not tuna-centric.

Foxyco's tuna tartare, $14.
Kathy Tran
I’ll confess I did not have the courage to try gemelli topped with croutons, beef Bolognese and balsamic vinegar. Ricotta gnocchi seemed a safer choice, and they’re a study in green, blanketed with individual Brussels sprout leaves, scallions and parsley ($26).

The flatiron steak, by contrast, takes full of advantage of the kitchen’s centerpiece, an Argentinian-style wood-fired grill. The grill, which takes hickory wood and charcoal, has a pulley system to raise and lower the cooking surface. But Foxyco also cooks some items, like a side dish of Yukon potatoes, directly on the coals.

Stevens says his team uses the grill for anything “from vegetables to bread to seafood to steaks and even sides.”

That custom-built system helps account for the flatiron steak’s absolutely dazzling flavor ($27). The meat comes with a terrific potato salad that uses whole mustard seeds, parsley and chewy — for once not crispy — nuggets of bacon.

The only thing better is a fork-tender beef short rib sitting on a bed of cauliflower puree ($29). It’s a camera-ready dish, and undeniably delicious, with the rich meat accented by horseradish, pickled red onions and an herb salad. (Actually, almost every single dish is topped with a tiny salad.)

There are rough spots for Foxyco to patch along the edges. One big turnoff was an “Angelic” cocktail, a fizz made with not quite enough mezcal ($12). Ours had mucous-y globs of unshaken egg white. It’s better to give in to sin than be angelic: The “Foxy,” a mix of gin, ginger and red Fresno pepper marmalade, is spicy and superb. 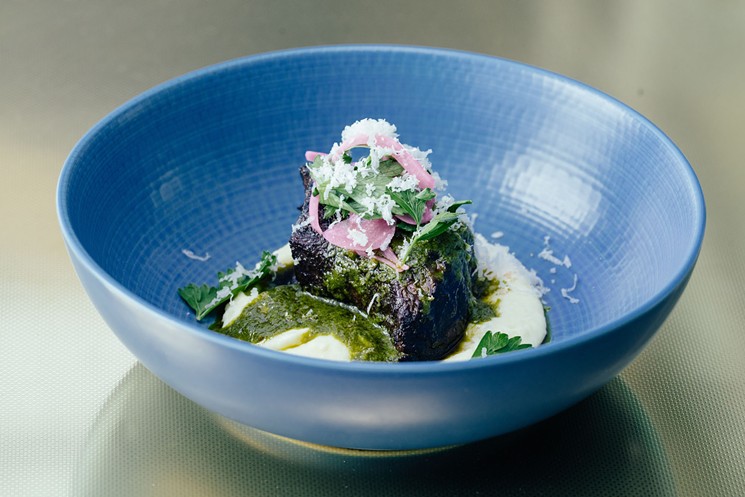 Foxyco's wagyu shortrib.
Kathy Tran
Stevens is excited to be serving a part of Dallas where fine-dining restaurateurs rarely go.

“So far it’s been really positive,” he says of customer response. “I don’t really have a concern about, Are they going to come here because of the bail bonds and the jail?” He is optimistic that this stretch of the riverfront will enjoy the kind of revival that is taking place in the Design District, just a few blocks to the north.

But on my most recent visit, Foxyco had one more surprise in store.

I sat alone and unrecognized at the bar at 6:30 p.m. on a recent Tuesday and was surrounded by an impromptu meeting between Stevens, a manager and several members of the staff. The meeting and several later, equally public dining-room discussions involved Stevens correcting employees’ work, a manager going over customer complaints and at least two staff members griping about their treatment by the restaurant’s leaders.

Foxyco's flat iron steak.
Kathy Tran
I asked Stevens about his comments to his staff.

“Stuff like this goes on constantly,” he said. “You have to tighten bolts — you have to keep the machinery very tight. Everybody’s on a consistent understanding of our program.”

But in the dining room, in front of paying guests? “If it was something that was personally private, then I would have done that,” he answered. “If it’s something like, 'Hey, we need to take care of this garnish,' I don’t care if the president of the United States is next to me. I’m just a communicator.”

In light of another conversation I overheard, I asked if Stevens considers himself tough to work for.

“Absolutely,” he replied. “Anybody that holds high standards can be tough. If you talk to my chefs, tough can be a different word than if you talk to some of the servers. It depends on their sensitivity levels; it depends if you have thick skin. I am definitely not the easiest person to work with. I hold everyone to a very high standard.” He explained that this “firmness” was the cost of being a perfectionist.

It is not my place to judge how a restaurant is run, as long as it’s run legally and ethically. Different leaders work in different ways. But dining-room disagreements can be uncomfortable for both customers and staff and can compromise an environment of hospitality. I hope that Foxyco’s team will find the professional success they seek and that this story’s steak-hungry readers will think twice about sitting at the bar.

Foxyco, 921 N. Riverfront Blvd., 214-295-5532, foxycodallas.com. Open Tuesday through Thursday 5-10 p.m. and Friday through Saturday 5-11 p.m.; weekday bar happy hour beginning 4 p.m.
KEEP THE DALLAS OBSERVER FREE... Since we started the Dallas Observer, it has been defined as the free, independent voice of Dallas, and we'd like to keep it that way. With local media under siege, it's more important than ever for us to rally support behind funding our local journalism. You can help by participating in our "I Support" program, allowing us to keep offering readers access to our incisive coverage of local news, food and culture with no paywalls.
Make a one-time donation today for as little as $1.